The Conversational Firm: Rethinking Bureaucracy in the Age of Social Media 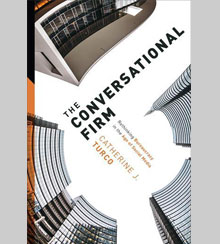 In 2012, Catherine Turco became increasingly intrigued by what she saw as a corporate preoccupation with openness. The open communication, decision processes, innovation, and offices in Web 2.0 companies like Facebook and Google were on their way to becoming corporate memes. And stalwarts like IBM and GE were making well-publicized forays into wikis and crowd-sourced product development. In particular, the associate professor of organizational studies at the MIT Sloan School of Management was struck by the gospel of “radical openness” being fervently preached by the leaders of a fast-growing, 600-employee social media firm, which she identifies only as TechCo.

“‘Could this work?’ I wondered,” recalls Turco. “Maybe it was all talk — a savvy presentation of corporate self that masked the same bureaucratic and hierarchical practices firms have had for years. Then again, maybe it would carry lessons for how corporations really could change. One December morning I woke up and decided I had to study TechCo.”

Turco devoted 10 months to that study, spending four days per week at the company; conducting nearly 100 interviews with 77 employees, including the senior leadership team; shadowing and socializing with employees; and attending innumerable meetings during and after work hours, as well as the week-long new employee training program. The welcome result of her immersion into all things TechCo is The Conversational Firm: Rethinking Bureaucracy in the Age of Social Media (Columbia University Press, 2016). This well-written, insightful ethnographic study solidly establishes the notion that hierarchical command-and-control structures and distributed decision-making structures (like holacracy) are not the only choices for managing a company.

Turco finds that TechCo’s management structure is rooted in the business philosophies of its two cofounders, whom she names Eric and Anil. Unabashed capitalists, they want to extend the openness engendered by the social media technologies they sell as marketing tools into the management of their own company. They want to be extraordinarily transparent with employees, to share all information, and to give employees a voice in decision-making processes.

So, Eric and Anil build openness into TechCo. Using an internal wiki as the primary channel of communication, the company’s leaders share even the most sensitive information, including detailed P&Ls, financial projections, and the equity structure of company. In return, they ask employees to share their information, ideas, and opinions. Unless their work requires them to be on the job at set times, employees choose their own hours and vacations. To ensure that TechCo is a collaborative company, the workplace consists of open bullpens. Employees switch workstations every quarter.

Interestingly, though, when Eric and Anil try to manage too loosely, TechCo employees use the firm’s open lines of communication to push back. When the company’s leaders want to limit their direction to “use good judgment,” employees complain that their leaders need to establish parameters for what that means. Eric and Anil hate the idea of publishing a formal organizational chart; employees demand one because they can’t figure out who runs what or who reports to whom. The two leaders refuse to establish an HR department (“I have a visceral hatred of HR,” Anil tells Turco), until employees finally force it on them. The lack of standards around employee performance reviews, policies (such as parental leave), and internal job changes drive the workers bonkers.

Conversely, when Eric and Anil exceed what TechCo’s employees perceive as their managerial prerogative, they hear about that, too. When Anil unilaterally creates a “culture deck” that purports to represent the company’s culture and releases it publicly, it is downloaded hundreds of thousands of times. Employees acknowledge its value as recruiting and marketing collateral, but are indignant that they weren’t consulted during its creation. And they complain that the deck isn’t an accurate representation of the company culture. As one employee tells Turco, “They’re pushing the culture down on us.”

What happens next? “Employees did not just play along,” writes Turco. “Rather, they voiced their criticisms loudly and clearly through all the various points of openness the company hand in place.” In response, the company hires a new executive whose main job is to focus on the company culture, starting with an audit of the culture deck to identify gaps and close them. Anil reworks the deck, emphasizing its aspirational nature and revising it to point out where those aspirations are not yet a reality. Eventually, TechCo’s employees come to embrace it as a guiding document.

“We can rethink the conventional bureaucratic firm by rethinking communication.”

Over her months at TechCo, Turco types 1,678 pages of daily notes and 380 pages of weekly analytical memos. (Note to author: Buy a digital recorder!) They lead her to the realization that TechCo’s management structure is a hybrid that emerged — and continues to evolve — because the company has “attack[ed] the bureaucratic firm’s structure of communication while leaving the structure of authority largely intact.” The company’s leaders mounted this attack with malice aforethought, but it appears that they may have wanted TechCo to be more “radical” than it actually turned out to be. Perhaps what Eric and Anil didn’t anticipate was the powerful effect that the ongoing, collective conversation within the company would have on the shape of its management structure and their own decision making.

This effect is what leads Turco to conclude that TechCo represents a unique management structure. “It means,” she adds, “that we can rethink the conventional bureaucratic firm by rethinking communication.” I wonder how much grief and value such a rethinking might have saved some of the companies that are facing significant scandals, investigations, and damage to corporate reputation.