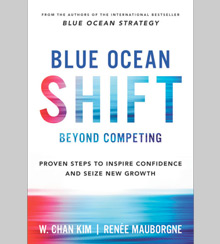 INSEAD professors W. Chan Kim and Renée Mauborgne hit the thought leadership lottery with the idea of blue oceans. Their 2005 book, Blue Ocean Strategy: How to Create Uncontested Market Space and Make the Competition Irrelevant Harvard Business School Press, which described the advantages of setting sail for new “blue ocean” markets devoid of competitors versus battling for percentage points of share in mature, commoditized “red ocean” markets, sold more than 3.5 million copies. The two professors, having found their own blue ocean, quickly ascended to the pinnacle of strategic consulting: INSEAD presented them with an institute and built blue ocean strategy into its MBA curriculum. Given all this success, the only truly surprising thing is that it took 12 years for Kim and Mauborgne to publish a follow-up.

For the most part, Blue Ocean Shift proves to be worth the wait. It is a practical, well-written guide to finding and exploiting blue ocean markets, informed by the experiences of companies and other organizations that have chosen to seek them out rather than compete toe-to-toe in established markets.

Kimberly-Clark Brazil (KCB), for example, sought a blue ocean for one of the most commoditized consumer products: toilet tissue. Competing in the US$1.5 billion market against 50 other companies and 200 brands, KCB needed to break out of the pack. It discovered a way by investigating how Brazilian shoppers took toilet tissue home — most of them lugged it a long way on foot or via public transportation. This led to the idea of significantly compressing the rolls in a vacuum pack, which had the added benefit of lowering shipping costs and reducing the amount of retail shelf space needed. KCB added a handy plastic carrying strap, patented the whole deal, and set sail on a competition-free blue ocean.

Experiences such as KCB’s provided Kim and Mauborgne with the fodder they needed to codify the journey to blue ocean markets. “While achieving a blue ocean shift may seem like magic, it is not,” they write. “There is actually a systematic process that is accessible to everyone, whether you see yourself as particularly creative or not.” This process, named in accordance with the rules of consultantese the “Blue Ocean Shift Process,” has five steps:

1. Get started by choosing the most promising place to focus your initiative and creating a team for it.

2. Understand where you are now by mapping the current state of play in your industry and making a compelling case for change.

3. Imagine where you could be by identifying customer pain points and the total demand landscape for your product.

4. Find how you get there by discovering the paths to reconstructing market boundaries and the strategic moves needed to travel those paths.

5. Make your move by selecting and executing the most promising option.

If this sounds like a generic change management process, well, that’s because a blue ocean shift typically entails organizational change, with all of its implications. And some of the authors’ advice is generic, too: Put together a cross-functional team of people with skin in the game and appoint a champion who has the power to help them over internal hurdles.

“While achieving a blue ocean shift may seem like magic, it is not. There is actually a systematic process.”

But Kim and Mauborgne also offer less familiar and obvious insights. One of them involves the idea of noncustomers, which they introduced in their first book. “For the past 25 years the business mantra has been ‘customer first,’” they now write. “The blue ocean strategist’s mantra is ‘noncustomers first.’”

Another intriguing idea is the “six paths” framework the authors offer for reaching blue oceans. These paths expand the conventional search for market opportunities. For instance, instead of analyzing your own industry, Kim and Mauborgne suggest looking across alternative industries. “The objective in this path is to identify the problem or needs your offering currently solves,” they write, “and then to generate a list of other solutions or industries noncustomers use to address the same problems or satisfy the same needs.”

Ideas like these make Blue Ocean Shift a useful and compelling read for leaders, whether they are seeking new markets or just trying to paddle ahead of the competition.

Topics: consumer packaged goods, consumer products, growth, strategy
Get s+b's award-winning newsletter delivered to your inbox. Sign up No, thanks