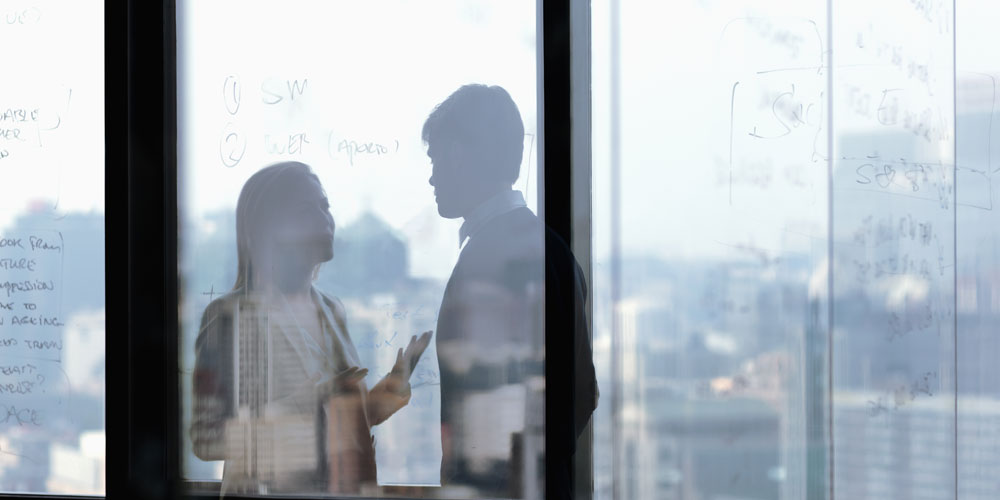 Many novels have dealt with business, but few bring to life the world of modern office work, with its complex interpersonal relations, its insistence on flawless emotional regulation, and its largely incorporeal output.

Millions of us spend the bulk of our waking lives in this mysteriously demanding environment. If you are such a person, take a day off and read The Adventurist. I cannot think of a novel more focused on the experience of today’s workplace, nor one that succeeds more brilliantly at enlarging this unpromising setting into the context for tragedy.

It is, of course, a workplace tragedy—a case of managerial cynicism, internecine rivalry, and office romance run amok. Nobody dies, at least not at the office, but everybody will die eventually, and so The Adventurist, like all literature, is pervaded by mortality. The protagonist’s hypersensitive antennae, as attuned to this as to the morale of his direct reports, accounts for the book’s great tenderness. Yet his antennae fail him when he needs them most—when it comes to the dangers of mixing work and love.

Unlike most of the books covered in this column, The Adventurist is not a seasoned classic, but its exquisite awareness of the way we work now is precisely why it merits our attention. First published in 2016, the book is astonishing in any number of ways. Author J. Bradford Hipps, an experienced computer programmer, is obviously writing about what he knows in a novel whose plot centers on software sales. Yet every page shimmers with humor and melancholy beauty. Who could have imagined that a need to meet sales quotas might be the basis for a struggle so heroic and yet so vile?

Every page shimmers with knowing humor and melancholy beauty. Who could have imagined that a need to meet sales quotas might be the basis for a struggle so heroic and yet so vile?

Henry Hurt is the 34-year-old head of engineering at Cyber Systems, an American internet security enterprise. His counterpart in sales is anxious, earnest Barry, who hopes to save his job by eliding the truth about a recent disastrous sales call in Minneapolis. Their boss, Keith, a supremely talented manipulator, soon lets it be known that their entire division will likely be eliminated if they don’t make their quarterly sales target. “A hundred and ninety–plus people,” he says in the big reveal. “Bang out of work.”

Meanwhile, Henry has fallen in love with Jane, a married colleague in marketing who is elevated to department head when the incumbent (“a cannibal” in Henry’s view) is struck by a recurrence of cancer. “She called me an hour ago—from the hospital, if you can believe it,” an emotional-seeming Keith tells the assembled managers, adding: “The only thing she wants from us, her words, is a good quarter.”

Though the book’s narrator and protagonist is Henry, it is Keith, a magnificently realized king cobra, who rivets our attention any time he appears. Great manager or a toxic executive? Maybe that depends on how cynical you are. “People need a warp and woof for their lives,” he avers at one point, explaining that early in his career he “learned how gladly, with what relief, [employees] accept the boss’s instructions as reason for their place on earth.”

Keith has no patience with “questers,” as he calls those who seek a purpose for themselves larger than business. He might scoff as well at those who agonize over business ethics, for it’s clear that he lies shamelessly and manipulates without compunction—even if it’s all for the corporate cause. He takes Henry to dinner to get the truth out of him about Minneapolis (which he will use to fire Barry), and at meal’s end suggests taking in a “ballet”—that is, hitting a strip joint. Henry allows himself to be dragged to this tawdry venue, where Keith, already suspecting his subordinate’s affections for Jane, lets it be known that if he could pick any woman in the office to sleep with, it would be her. “I am a little in awe,” Henry thinks. “Here is a boss who need never shout or bully. His guile is more than enough.”

As the book moves inexorably toward its catastrophic denouement, we have time to appreciate Henry’s observations about the world of work. “Most of my team are programmers, for whom direct communication is a thing to be avoided at all costs,” he tells us on encountering 117 unread messages on a Monday morning. “This means some desperate and time-sensitive decision—say, whether there is wiggle room on an imminent deadline—is almost certainly ticking away inside my inbox.”

During an office visit from Tom Burges, Cyber’s handsome and genial divisional president, Henry notices that aging executives “become as romantic and philosophical as old generals.” When Tom speaks, hand “pressed humbly over the knot of his tie,” Henry can’t quite make out the words but is nonetheless moved. “How bonded and hearty he seems! Only when I glimpse Keith above his shoulder is the effect ruined. Beneath that gaze the rest is just so much ceremonial benevolence.”

Henry acknowledges the problem of purpose up front, explaining why he does what he does: “What moves me to work is money’s comforts, yes, and also a community of smart, mostly efficient people; the sense of place that a good office gives.” Elsewhere he notes that “some of the most satisfying days I’ve known have occurred inside these walls.”

Besides, no grander vocation has ever seemed persuasive; “as soon as any noble thing presented itself, it was replaced by another.” Henry, moreover, cherishes a certain ordinariness and the grandeur to be found therein. The novel opens with an epigraph: “Businessmen are our only metaphysicians.” It is taken from The Moviegoer, Walker Percy’s classic novel about a young stockbroker named Binx Bolling whose real focus is a mysterious psychological search he is conducting. Binx, like Henry, is stalked by despair, hiding from it by going to the movies, living on the periphery, and halfheartedly wooing his secretary.

Henry too prides himself on his mundane life, approving of business clichés because “to use them is a sort of code of modesty, a signal that none of us have figured it out on our own.” He works in an office tower in a nameless and perhaps faceless New South city. He feels no urge to heroism beyond the Dilbert variety. “Acquiring a skill, linking arms with others to fix problems, fulfilling one’s duties with aplomb, all toward a commercial end, is its own kind of nobility. The nobility of no pretensions.”

Yet navigating the swirling personalities, incentives, and risks of this environment is immensely challenging, and Hipps makes it all come alive through the brilliantly realized interactions of his central players. Staff meetings, a NASCAR event, and a tender but tortured encounter between Henry and Jane are all handled in nuanced cinematic style. The book is rich with such scenes, as if Hipps’s day job might as easily have been screenwriting as it was coding. The Minneapolis sales presentation—the stress of finding the place, arriving late, getting someone’s name wrong, knowing the whole time that you have to seal the deal—is so painfully funny it is worth the price of admission by itself. (Hipps’s perfectly modulated reading of this section during a visit to Google is not to be missed.)

But that was the sales director’s undoing, not Henry’s. Like all tragic heroes, his downfall is the result of a flaw in himself—the hunger for something grander, something more truly heroic. When Keith’s new sales sidekick—who materialized as soon as Barry was fired—suggests that the boss is involved with Jane, Henry plots a savage revenge. But blinded by love and ideals, he points his lance at a windmill—and charges right off a cliff. On top of everything else, Cyber makes its number—itself a mirage conjured by Keith. In the office, it seems clear, Don Quixote is no match for Machiavelli. It has ever been thus.