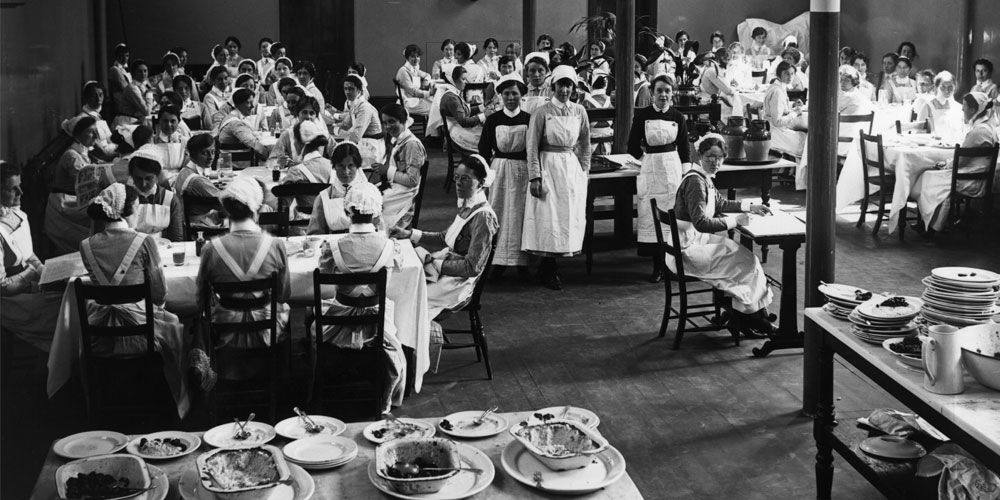 Bad managers persist despite countless business books warning against the pitfalls of power. But no management text paints a more vivid picture of the problem than E.M. Delafield does in the monster of self-regard at the center of The War-Workers.

Published in 1918, this brief and biting novel is based on Delafield’s volunteer work in Britain during what was known then as the Great War. Born Edmée Elizabeth Monica de la Pasture (Delafield was a pseudonym), the author had already failed to receive an acceptable marriage proposal as a debutante and resigned from the Belgian convent to which she had fled in despair. The cloistered life ill-suited her, but the work she was given there was “an absolute revelation of unsuspected enjoyment” at a time when women of her lofty social status weren’t expected to take jobs.

When the war came, the massive mobilization of men opened up new vistas of employment (paid and unpaid) for millions of British women. Elizabeth, as she was known to her volunteer coworkers, scrubbed floors, prepared food, served tea to men she never would have been allowed to talk to, and lived with women from a variety of backgrounds. She even worked the night shift once at a convalescent hospital housed in a mansion where she had attended a dance. Newly independent, she was filled with the joy of purpose. As she explained later, “It was emancipation of the most delirious kind, it was occupation, it was self-respect—above all, it was freedom.”

Delafield wrote her first novel on her lunch breaks, launching a prolific career as a popular author, playwright, radio commentator, and mainstay of her Devonshire village. She acknowledged later that she wrote too much, and some of her work shows unmistakable signs of haste. She was nonetheless a brilliant humorist and a psychologist of great acuity who drew heavily on her life for her fiction. Her most famous novels, the hilarious Diary of a Provincial Lady series, are multilayered classics marked by the author’s withering intolerance for fakeness, pretense, and cant. Her 1918 novel, The War-Workers, has great resonance for those who study management today. At its center is a terrible executive, who comes off like the prototype of today’s digitally empowered, Soylent-chugging manager who needlessly texts staffers at 3 a.m.

In The War-Workers, we encounter Charmian Vivian, who at 29 is director of the Midland Supply Depot in fictional Questerham, a role in which she has managed to extend her hegemony to encompass hospitals and other war-related operations throughout the area. Miss Vivian, as she is known to her awestruck minions, would appear to be a model of selfless dynamism. When some staffers come down with flu, she tackles the work of six people, multitasking by exploiting her “faculty of following two or more trains of thought at the same moment.”

But from the outset, we have reason to doubt the veneration she has managed to extort from the overworked women she supervises—particularly the blind devotion of her secretary, Miss Delmege, who gives the lie to the old saw that no man is a hero to his valet. Delmege’s worship derives in part from self-interest. For in the shabby hostel where the workers live, she revels in the exalted status she derives from her proximity to the godlike Vivian. The only dissenter is clear-sighted Grace Jones, newly arrived from Wales to assist Delmege in the inner sanctum.

Their boss, it quickly becomes clear, is an obsessive micromanager; Delmege herself reminds the others “that every letter and every bit of work in the whole office passes through Miss Vivian’s hands.” Of course this impedes efficiency. Vivian’s continual frenzy—she is a votary of what Barbara Ehrenreich has derided as “the cult of conspicuous busyness”—means every decision, no matter how small, has to await her Solomonic judgment. “We can’t get at her unless we’re sent for,” one of the women complains. “I simply didn’t know what to do about those surgical supplies for the Town Hospital this morning, and Miss Vivian never sent for me till past eleven o’clock. It simply wasted half my morning.”

Vivian’s continual frenzy—she is a votary of what Barbara Ehrenreich has derided as ‘the cult of conspicuous busyness’—means every decision, no matter how small, has to await her Solomonic judgment.

Micromanagers like Vivian are egoists who see their subordinates as robots, incapable of exercising judgment despite their greater knowledge of the facts on the ground. But she’s a terrible manager in other ways, too. Flaunting her martyrdom, she insists she has no time to eat lunch even at her desk, and when she’s completed her tasks within the span of a normal workday, she stays late anyway to signal her heroic dedication. At every opportunity she tries to induce guilt in her hard-working staff, ruling with an iron fist but manipulating the women into admiration by bestowing occasional favors. Her goal at all times is to gratify and inflate herself at the expense of others—especially women. “It was part of Char’s policy,” Delafield writes, “always to disparage her own sex. It threw into greater relief the contrast which she knew to exist between herself and the majority of women-workers.”

She is also a hypocrite. For all her ostentatious self-deprivation, she is ferried to and from work in a chauffeured car, which delivers her at the end of a long day to a manor house on a nearby estate where she enjoys well-heated surroundings, well-cooked food, and servants who look after all the quotidian tasks that fall to other women during their scant time off.

Things begin to unravel when Vivian’s father has a stroke and her mother, Joanna, unreasonably reflecting the wishes of a man increasingly non compos mentis, demands that Vivian remain at home during his convalescence. Dedicated to her work, her independence, and her sense of importance, Vivian refuses. She is thus banished to the hostel where her underlings live, and is shocked by hardships including brutal cold and inadequate food. Her peremptory decision to fire the facility’s dedicated superintendent, who sacrificed her own room for Vivian and was beloved by the women for her tireless efforts in the face of overcrowding and shortages, triggers a rebellion.

“What in the name of fortune is the sense of vexing and distressing everybody, when by a little decent management the whole thing could be put on to a proper basis?” asks Joanna. Addressing her daughter’s assistant, she asks, “Grace, you’ve lived in that Hostel. If the Superintendent had a freer hand, couldn’t it be made more comfortable?”

What may get The War-Workers in trouble today, aside from its pitiless portrait of an officious female executive, is the way Grace is all but adopted by Joanna and wins the handsome officer  temporarily home from the war. Yet, at the end, all the women are still doing war work and even Joanna has made her great home into a convalescent center. Vivian continues to defy chauvinistic expectations, but comes to see that the work of the supply depot will be done for the cause, not for her.