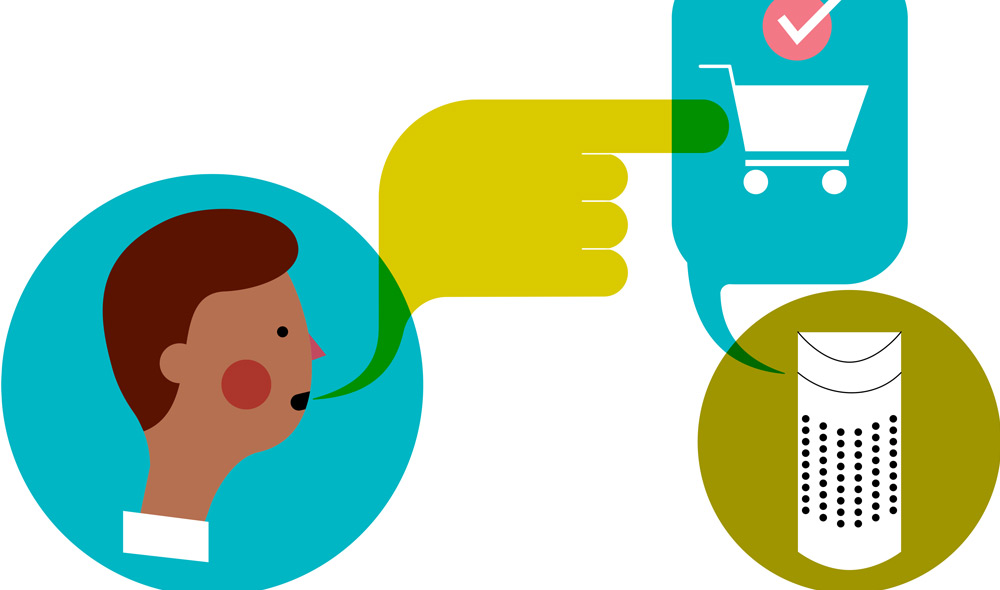 Just ask Alexa…or Siri…or Google Assistant…or Cortana...or Bixby. Each of these brand-name voice assistants speaks when spoken to, turning on a smart speaker or other voice-activated device that can answer questions. Voice is rapidly emerging as a hands-free medium consumers use for, well, just about anything — music, news feeds, hints on removing stains, instructions for mixing cocktails. In homes, people use voice commands to adjust interconnected lights and thermostats, and search for — and even buy — products and services.

There’s something primal about listening to entertainment. Think of cave dwellers huddled around a fire pit enraptured by hunting tales, or a 1940s nuclear family gathered in front of a radio for the next episode of The Lone Ranger. And until recently, forms of entertainment and media that relied solely on voice seemed to be on the decline. Video killed the radio star, as the 1979 pop song by the Buggles put it. But voice is undergoing something of a renaissance. Revenue associated with radio has been stagnant, rising just 3 percent between 2014 and 2018, according to PwC’s Global Entertainment & Media Outlook. Print, radio, television, the Internet, and smartphones are now the predominant platforms for information, entertainment, and commerce. In recent years, new voice-based software, hardware, and content have infiltrated the homes, devices, and media diets of millions of people. And now the businesses built around voice — voice assistants, v-commerce, podcasts, audiobooks — are booming, on an absolute and relative basis. As the industrial scaffolding is being raised around former cottage industries, the share of voice is clearly increasing. In a recent Reuters Institute survey, three-quarters of digital publisher respondents said that audio is becoming a more important part of their content and business strategy.

The first voice, or virtual, assistant was Apple’s Siri, which was embedded into the iPhone in 2011. Siri proved to be remarkably efficient at retrieving information for users and executing basic tasks (“Siri, call Mom.”). Amazon’s 2014 introduction of the Echo smart speaker and its compliant Alexa assistant provided a new pipeline for voice into millions of homes. Google and Microsoft have followed suit with their own voice assistants and speakers, and audio component specialists such as Sonos, JBL, and Harman Kardon have developed similarly intelligent speakers. Beyond delivering content, these devices and their associated technology have created a new platform for enabling communication and, ultimately, commerce.

The adoption curve for smart speakers in the U.S. has been remarkably steep. By the end of 2018, according to research firm Voicebot.ai, 66.4 million U.S. adults (representing 26.2 percent of the total number) owned smart speakers, up 40 percent from 2017. In 2018, according to PwC’s Global Entertainment & Media Outlook, 88 million smart speakers were in use in 20 key markets. That number is expected to rise at a 38.1 percent CAGR through 2023, when 440 milllion units are expected to be installed in those markets. In the U.S., Amazon Echo maintains a 61 percent market share, though Google Home is closing the gap, with a 24 percent stake, according to Voicebot.ai. 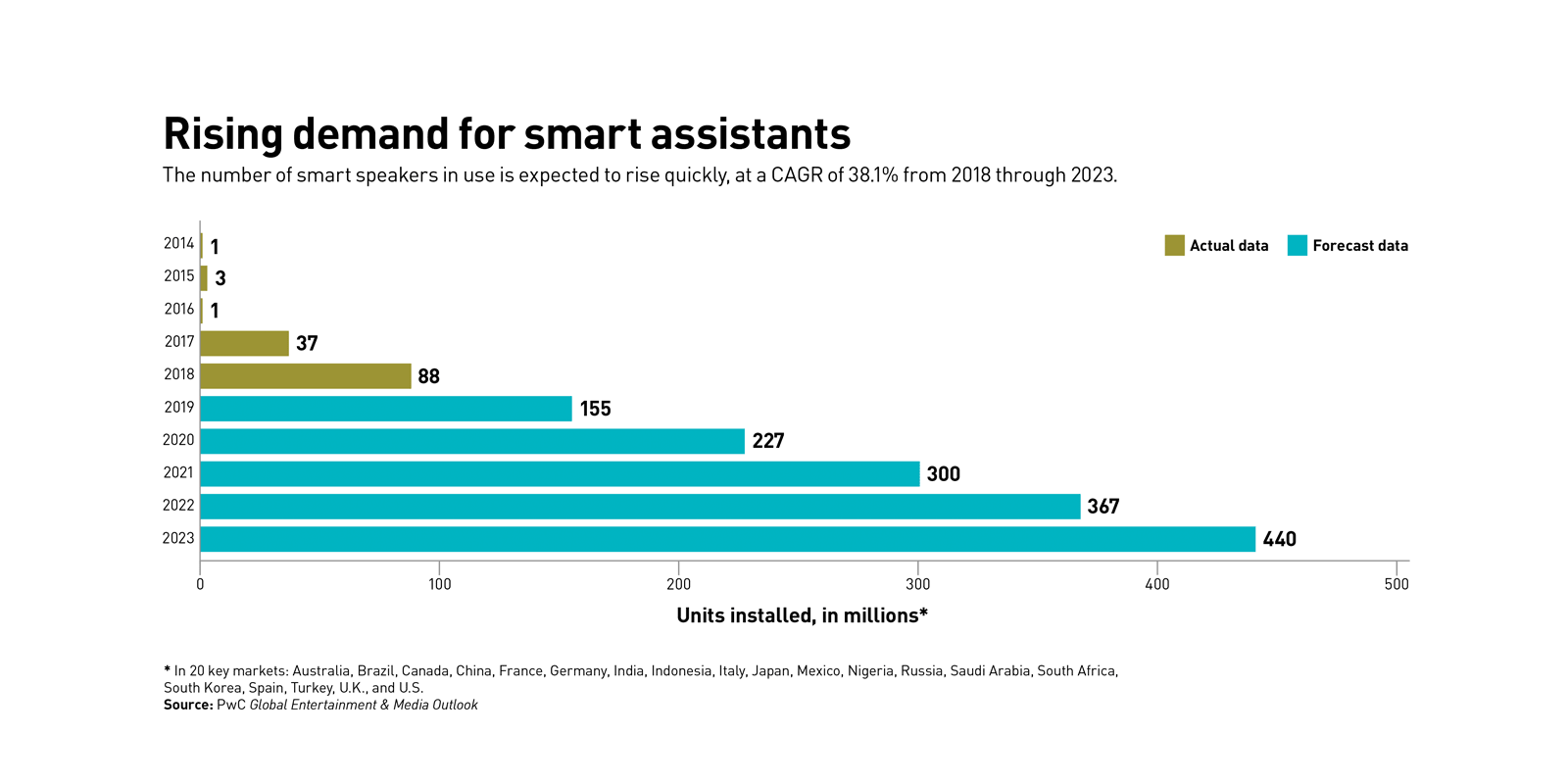 But voice tech doesn’t just mean delivering weather updates or playing music on demand. Fortified by machine learning, plus the analysis of the yottabytes of data inconspicuously mined by myriad devices, home speakers and voice assistants are pushing the realm of the Internet of Things (IoT) deep into people’s homes, as speakers sync up to appliances and home management and entertainment systems. By 2020, all of Samsung’s and LG’s appliances will be IoT compatible.

Voice tech’s arrival represents an important evolutionary step in user convenience. With computers, typed text originally was the primary input. Then came mouse clicking, followed by trackpad tapping and swiping. Mobile technology led to anywhere/anytime access. Voice offers the combination of ease of use (no hands) and immediacy. Of course, as is often the case in the early innings, uncertainty is common. “We are looking at the massive opportunity, but also the lack of sophistication among average consumers trying to figure out how to use the darn things and what they’re good for,” said Christine Bangah, a principal specializing in technology, entertainment, and media at PwC US in Seattle. Bangah was part of a PwC team that in 2018 compiled a Consumer Intelligence Series report, “Prepare for the Voice Revolution,” which surveyed 1,000 Americans between the ages of 18 and 64 about their perception and usage of voice tech and devices. Nine out of 10 respondents had a basic awareness of voice-enabled products and devices, and 72 percent of that group had used one. Most of the tasks commanded were simple: checking current news and weather, playing music, doing Web searches, and asking other quick questions.

In the media world, advertising tends to follow attention and consumer behavior; advertising and commerce grow in parallel on new platforms and in new channels. There are signs that a similar pattern is beginning to happen with voice. For now, only a small number of consumers are willing to v-shop for commodities such as pet food, toilet paper, and laundry detergent. Indeed, in 2018 v-commerce accounted for just 0.4 percent of digital sales, or US$2.1 billion, according to eMarketer.

But voice devices are poised to become an important new marketing platform. Global advertising on voice devices, practically nil today, is predicted to rise to $19 billion by 2022, nearly the size of the current magazine ad business, according to Juniper Research. And by 2023, Juniper calculates, the volume of v-commerce will rise to $80 billion.

Global advertising on voice devices, practically nil today, is predicted to rise to $19 billion by 2022, nearly the size of the current magazine ad business.

Marketers are preparing for the voice revolution with limited sorties, not all-out assaults. They are largely emphasizing providing information about branded products and services — content consumers are conditioned to seek via online searches — and stopping short of urging the user to make a purchase. For example, a father might ask Alexa for the ingredients in Oreos because he’s worried his son might be allergic to some of them. This strategy uses tried-and-true principles of search engine optimization (SEO), but applies them to voice commands rather than typing, highlighting a unique attraction of voice tech. “The SEO is based on how humans actually speak,” Sean Corcoran, executive director at Boston-based MullenLowe Mediahub, told AdExchanger in 2019.

Many brands are working with agencies and voice tech developers to custom-build branded skills, the newly coined term for audio-only versions of mobile apps. They’re activated by a spoken command to a voice device, prompting some type of branded content that the consumer listens to, no hands and all ears. New York–based digital marketing agency 360i partnered with HBO in 2018 on the network’s first skill, Westworld: The Maze, a voice-activated video game that allows fans of the popular science fiction series to experience personalized adventures. The New York Times is launching a daily news briefing for Alexa devices, as well as an interactive news quiz, tied in to the Sunday edition, that prompts readers to launch dedicated Alexa skills to learn more about the stories they’re reading. Consumer brands are testing the skills waters, too. Hellmann’s Alexa skill invites consumers to ask for and listen to recipe ideas using common ingredients. And a skill from tequila maker Patrón suggests new cocktails and coaches listeners through preparing them at home.

V-commerce is following hard on the heels of podcasting, whose already impressive rise is likely to be boosted further by the growing infrastructure of voice-related entertainment, media, and marketing businesses. According to PwC’s Global Entertainment & Media Outlook, podcasting ad revenues rose to $911 million in 2018. Global podcast revenue is set to rise at a 28.5 percent CAGR through 2023, when it will reach $3.2 billion.

Moves by some of the largest players in the entertainment and media industry are highlighting the attractiveness of podcasts as a business. In early 2019, music-streaming powerhouse Spotify purchased podcast producer Gimlet Media for $230 million and Anchor FM, an app and Web tool that helps podcasters record and distribute content, for $110 million. “With the world focused on trying to reduce screen time, [this] opens up a massive audio opportunity,” Spotify CEO Daniel Ek wrote in a company blog post. “As we expand deeper into audio, especially with original content, we will scale our entire business, creating leverage in the model through subscriptions and ads.” Spotify is reportedly prepared to spend an additional $500 million for similar acquisitions in 2019. Money is also flowing into startups that aim to improve the voice ecosystem, such as Audioburst, a Tel Aviv–based company that aggregates podcasts and recorded content and facilitates search across them.

The growth of podcasting has proved that in an age of constant distraction, there is a yearning for immersive long-form content that people can access and absorb in places in which it is either inadvisable or illegal to watch video: during commutes, in the car, while exercising, at work. So perhaps it is not surprising that one of the original forms of portable long-form voice content — the audiobook — is likewise thriving.

Audiobooks have historically been a small slice of the overall book market. But in recent years, they have emerged as a robust niche. In February 2019, the Association of American Publishers’ StatShot reported an impressive 37.1 percent jump in downloaded audiobook sales in 2018, to $469.3 million from $342.2 million in 2017. This, in a year when overall trade book sales in the U.S. rose just 4.6 percent. To be sure, revenue from electronic books was more than double that of audiobooks in 2018, at $1.05 billion. But those e-book sales declined by 3.6 percent from the previous year.

Given the continuing collapse of the retail channel for physical books, some of the most prolific and best-selling authors are eschewing print and embracing audio for their upcoming projects. Malcolm Gladwell, author of a number of nonfiction books that have sold phenomenally well, recently formed his own podcasting company, Pushkin Enterprises, to pursue new projects. In June 2018, Michael Lewis (author of, among other books, Moneyball, The Blind Side, and The Big Short) signed a multiyear contract with Audible, Amazon’s audiobook business, to create four original audio-only stories. The deal actually sidestepped Lewis’s plan to sample his next book as a 10,000-word piece for Vanity Fair. “You’re not going to be able to read it,” he told the New York Times. “You’re only going to be able to listen to it.”

As the infrastructure surrounding all things voice — devices, virtual assistants, v-commerce, podcasts, audiobooks — continues to grow, the suite of services and the large sponsors that enable those businesses to thrive will also get bigger. Participants in the vast and continually changing entertainment and media industries need to keep their eyes and ears wide open for opportunities.

It’s an ad, ad, ad, ad world
Some striking data in the latest edition of PwC’s Global Entertainment & Media Outlook explodes the notion that the advertising business is in decline.
by Daniel Gross
Digital issue