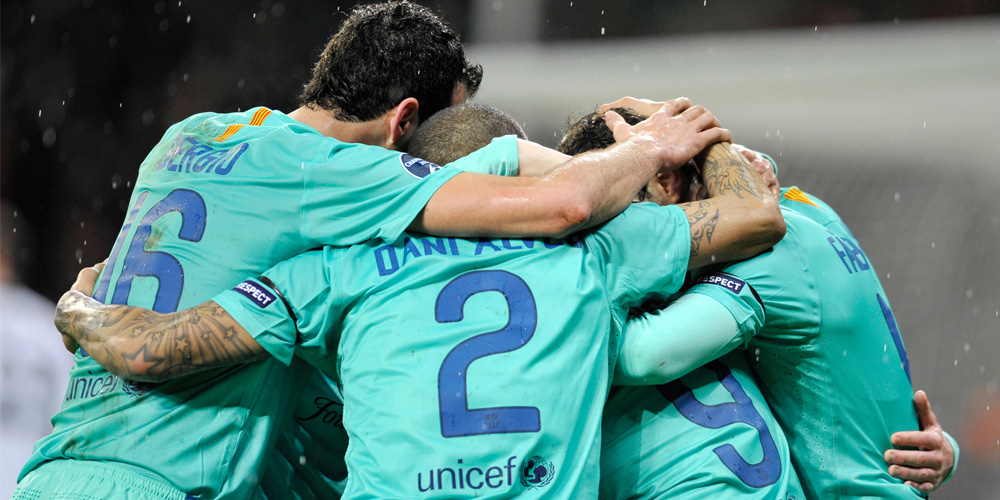 If you had to date the peak of FC Barcelona’s reign in global soccer, it might be November 25, 2012. That night, Barça, which plays in the Spanish topflight La Liga, won 4–0 at little Levante. When Martín Montoya replaced the injured Brazilian Dani Alves after 14 minutes, all 11 of Barcelona’s players on the field had come through the club’s youth academy, La Masia. Even Barça’s coach that day, Tito Vilanova, was a Masia alumnus.

Arguably, this homegrown 11 were the best on Earth. Soccer clubs pride themselves on having strong youth training programs, but this team was something special. Most of the players had won the World Cup with Spain in 2010. Another, the little Argentinian Lionel Messi, was widely recognized as the world’s best footballer. Barcelona at the time was all-dominant: in the decade from 2006 to 2015, it would win the European Champions League, the biggest prize in club soccer, four times.

How the mighty fall. For years now, Barça has regularly been thumped by better teams in European competition. This August, after running up debts of about US$1.5 billion, Barça was forced to let Messi join Paris Saint-Germain. The Catalan team couldn’t afford to offer him a new contract even after he had agreed to halve his pay.

With the club in decline while I was researching my recent book, The Barcelona Complex, I sometimes felt as if I were writing about Rome in 400 AD with the barbarians already inside the gates or perhaps a chronicle of the humbling of GE, a once mighty industry giant whose management relied on past strategies for success with disappointing results.

Barcelona’s fall from grace offers lessons for companies that lead or aspire to lead their sectors. The club fell into the trap set for every company that’s number one: it got lazy while its rivals copied its best ideas and built on them. It failed to create a sustainable succession plan for its aging players, and it was profligate with its finances. Barcelona failed to understand that greatness is always a moving target, not just on the pitch.

More than almost any other industry, professional sports revolve around the war for talent. The difficulty teams face in finding the people is something that most companies are starting to experience in the current tight jobs market. The cheapest way to find talent is to source it in-house, as Barcelona did brilliantly in the Messi era. But then the club fell victim to its own success. Once the team was packed with world-beating players, there was little scope for new talents to make their own developmental journey. When the playmaker Thiago Alcântara emerged from La Masia around 2010, he found his path to the first team blocked by the world’s best midfield in Xavi, Andrés Iniesta, and Sergio Busquets. Thiago ended up leaving for Bayern Munich. In 2020, he starred in Bayern’s 8–2 demolition of his old club.

The Brazilian Neymar did find a place in the great Barcelona side, but he too eventually saw his development blocked. Neymar aspired to something greater than playing as Messi’s right hand, running onto the Argentinian’s passes. He wanted to be Messi: the fulcrum of every attack, winner of Ballon d’Or awards for European Footballer of the Year. In 2017, he left to become the main man at Paris Saint-Germain. Messi considered him modern Barcelona’s most significant loss. (Ironically, the pair are back together again at PSG this season.)

More fundamentally, Barça fell into the trap that catches industry leaders across all sectors: complacency. When an organization is number one, the temptation is to stop thinking. Why innovate when you are already the best? Paco Seirul·lo, a physical trainer who over the decades has turned into the guardian of Barça’s culture—he is known as El Druida (“the druid”)—told me that the club had never bothered to study the great Masia generation to understand how it had emerged.

Meanwhile, every rival club was studying Barcelona. They followed the lead of the long-running advertising slogan of rental car firm Avis, which was number two in the market: “We try harder.” The German Hans-Dieter Flick was just one of countless European coaches who visited La Masia to discover its secrets. In 2020, Flick coached the Bayern Munich team that crushed Barça.

During Barcelona’s glory years, as one La Masia coach admitted to me, he and his colleagues never made study visits abroad to see what other clubs were doing. They traveled only to explain their success to admiring foreign colleagues at conferences. Over time, every big soccer club’s youth academy in Europe became La Masia: a university whose curriculum was devised by the legendary Dutch soccer player Johan Cruyff when he took over as manager at Barça in 1988 and explained that winning at soccer meant mastering the rapid passing game. For years, the on-field geometry of Barcelona’s interplay left opponents bewitched. But once everyone else has become La Masia, the original Masia loses its lead.

“Football is evolution,” summed up Pep Guardiola, coach of Barcelona in its peak era, from 2008 to 2012. Especially in Europe, where the best teams play one another constantly, the sport improves almost by the month. After a team lost to Barcelona, it would go home and work out what it was doing wrong. Everyone kept getting better—except Barcelona. The one-time innovators were overtaken, in a process that the economist Joseph Schumpeter labeled “creative destruction”: new entrepreneurs come along with new ideas, and the pioneering systems of yesteryear are junked. If you play the soccer of 2012 in 2021, you will lose.

When you’re number one, you also tend to get careless with your spending. While the money pours in, you stop counting every penny. In 2018, Barça became the first club in any sport ever to gross more than $1 billion in annual revenues. And so when Jorge Messi, Lionel’s father and agent, kept threatening that his son would leave unless he got another pay rise, the club kept giving in. From 2017 through 2021, Messi earned a total of more than €555 million ($674 million), according to highlights from his 30-page contract published in Spanish newspaper El Mundo, and not denied by player or club. Bayern Munich’s chairman Karl-Heinz Rummenigge said he had “had to laugh” when he saw the contract: “I can only compliment him on managing to negotiate such an astronomical salary.”

Everyone kept getting better—except Barcelona. If you play the soccer of 2012 in 2021, you will lose.

A senior Barça official told me Messi’s salary had tripled between 2014 and 2020. He added, “Messi is not the problem. The problem is the contagion of the rest of the team.” Whenever Messi got a raise, his teammates demanded one as well. By 2019, average first-team pay at Barça was $12.2 million a year, the highest for any sports club on Earth, according to the Global Sports Salaries Survey by Sportingintelligence.com. (Rival soccer clubs Real Madrid and Juventus were second and third in the rankings, with NBA basketball teams completing the top ten.)

In any talent industry, the talent has substantial power vis-à-vis the employer. But at Barça, the talent was so successful, experienced, and well-paid that its power became close to absolute. Quique Setién, head coach for seven unhappy months in 2020, said he was always aware that Messi could get him fired at any moment. By then, the survivors of the great Masia generation were effectively running the team and quite simply not working hard enough. Almost every day at Barcelona was take-your-children-to-work day. Kids would kick a ball in the changing room with their dads before a game. And whereas other Spanish teams would fly to road games the day before the game, to acclimatize, Barça usually flew on match day itself. The Barça players preferred it: they liked being at home longer.

As the dominant players aged, Barça’s training sessions slowed down. That was a shock for the Frenchman Antoine Griezmann, who had come from Atlético Madrid in 2019. There, he recalled, “Every training session was at the intensity level of a match.” Barça paid €120 million ($142 million) for Griezmann. In August 2021, it lent him to Atlético for free, his talent wasted for two years in what had become a dysfunctional team.

Barcelona is now in freefall, and yet this is also a strangely creative moment at the club. The people on the inside understand that having lost their greatest talent, it’s time to start rethinking. Some of the spirit of innovation that once made this the world’s leading club may now be returning.