Leading with Dignity: How to Create a Culture That Brings Out the Best in People 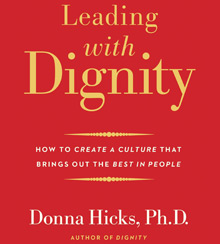 With bankruptcy looming, management appealed to employees to accept pay cuts and “pull together and win.” The workers did. After the company limped along for five long years, the turnaround came. The company’s leaders marked the occasion by giving themselves hefty bonuses, but didn’t bother to restore worker pay. A complete breakdown in the relationship between management and employees ensued, and Donna Hicks got a call.

Hicks is a conflict resolution expert. During her long association with Harvard University’s Weatherhead Center for International Affairs, she has worked with governments, corporations, and other organizations to reconcile seemingly unreconcilable differences between groups of people. In the mid-2000s, the BBC enlisted her to co-facilitate, with Desmond Tutu, first-time encounters between victims and perpetrators in the Troubles in Northern Ireland. Hicks found a thread connecting all of these experiences: Conflict is exacerbated by violations of dignity.

“The common denominator is the human reaction to the way people are being treated,” she writes in Leading with Dignity, her second, sometimes redundant, book on the topic, which tightens its focus to business. When people’s dignity is violated in the workplace, she writes, “they feel some of the same instinctive reactions that parties in international conflicts experience — a desire for revenge against those who have violated them. People want their grievances listened to, heard, and acknowledged. When this doesn’t happen, the original conflicts escalate, which only deepens the divide.”

Moreover, leaders play a major role in dignity violations and the outcomes that they produce. “The extent to which leaders pay attention to, recognize, and understand the dignity concerns underlying people’s grievances makes an enormous difference as to whether these conflicts can be resolved,” Hicks writes.

If you’ve been watching the leadership spectacle currently playing on the world stage, you might not be surprised to learn that most leaders, and the rest of us, too, have a woefully underdeveloped understanding of dignity. “Most people do not have a working knowledge of dignity,” Hicks writes. “I have found that most people are unaware of their own inherent value and worth, and are usually at a loss for how to recognize it in others.”

To remedy the situation, Hicks seeks to raise the “dignity consciousness” of leaders. This requires being connected to your own dignity, the dignity of others, and the dignity of something beyond ourselves — to a higher power, or the Earth, or the greater good. Hicks calls these connections “the 3 Cs” and says that they are the critical underpinnings of the ability to lead with dignity. But the first — being connected to your own dignity — provides a foundation for the other two. If you don’t recognize your value and worth, how can you recognize and support it in others?

If you don’t recognize your value and worth, how can you recognize and support it in others?

A fully developed awareness of the source of your dignity is a key support in this regard. Hicks says that this awareness evolves in stages. In the first stage, dependence, it derives from how others treat you. This conception of dignity is understandable in children, who depend on other people for their survival. But if you get stuck in this stage as an adult, you can become overly dependent on the approval of others. And if that approval isn’t forthcoming, you can end up adopting a victim mentality.

In the second stage, independence, the locus of your dignity is internalized. This is a healthier conception of dignity, but at this stage, says Hicks, you are still vulnerable to the opinions of others. If they don’t treat you with the dignity that you think you deserve, you are likely to fight back.

Leaders, argues Hicks, need to reach a third stage of dignity awareness, interdependence. “In this more evolved stage of understanding our inherent value and worth, we recognize that we do need others to protect and maintain our dignity, though not in the childlike way,” she writes. “We have moved beyond simply internalizing our worth to seeing the advantage of receiving feedback from others, even if it feels uncomfortable.”

Hicks’s ideas about how our conception of dignity evolves — or doesn’t evolve — provide an interesting lens through which to view today’s high-profile leaders. “Is the fear of losing dignity behind some of the many leadership failures we are seeing in the world?” she wonders.

In addition to providing a user’s guide to your own dignity, Hicks explains the behaviors that leaders should adopt to become dignity models. It’s likely you’ve heard them before: trust, empathy, mindfulness, and accountability. She also offers leaders a tool kit for embedding dignity in companies, including training and “dignity pledges,” among other things.

All this makes Leading with Dignity a convincing and useful book. For some leaders, it might even be a career-saving one. Remember that management team that gave itself bonuses, but didn’t bother to restore employee pay? Hicks advised its members to adopt one of five options, ranging from a simple acknowledgement that their actions felt like a dignity violation to employees to an apology, an admission of guilt, and a commitment to rectify the situation. The company’s leaders ignored all of them, maintaining they hadn’t acted improperly in any way at all. The internal rift was never healed, reports Hicks — and the company was sold.