Neither Snow Nor Rain: A History of the United States Postal Service

A massive, slow-moving government agency runs up growing deficits. The private sector, promising to do a better job, skims off the agency’s most valuable customers. The government, furious that private vendors are moving in on its monopoly, tries to stamp out competition. Meanwhile, in an attempt to cut costs, the behemoth quietly privatizes some of its own services.

If any of these problems — government bloat, public–private competition, the inevitable lobbying from private interests — sound familiar, they should. They’ve been with us for a long time. That agency we’re talking about here? It’s the post office. And the year is 1854. The private challengers: Wells Fargo and the fabled Pony Express. 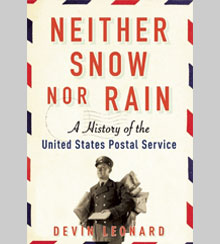 In Neither Snow Nor Rain, Devin Leonard, a staff writer at Bloomberg Businessweek, tackles the story of the U.S. Postal Service in a history that is equally rollicking and relevant. “Rollicking” is an old-fashioned word, and it’s an appropriate descriptor for a history that’s as full of mud, steamboats, and canvas-skinned biplanes as a reader could hope. Spanning the period from before the American Revolution to the present, this is history on an epic scale. Some of the heroics that went into the making of the Postal Service would be unimaginable today, such as the story of the pioneering airmail pilot who commandeered an untested plane, made an emergency landing on a farm and found himself staring into the barrel of a farmer’s shotgun…and took off again to make his delivery.

All the heroics, of course, are in the service of a crucial national project: binding the country, in which citizens were separated by great distances, wide rivers, and forbidding mountain ranges, together with a reliable, democratic means of communication. It’s obvious now that advancements in communications are a foundation on which further economic progress is raised. In the last decade, trillions of dollars of investment have gone into shaving hours, and then minutes, seconds, and nanoseconds from the speed with which news and information are delivered. Now imagine the effect when improvements in speed were measured in days, weeks, and months. As much as the Postal Service may serve as a stand-in for a lumbering, old-fashioned bureaucracy, for much of its history it was in fact at the cutting edge of communications technology, and it was a crucial enabler of the private sector.

The post office was put on a professional footing by Benjamin Franklin, who ran the mail service for the Crown and went on to become the new nation’s first postmaster general. Franklin — a man whose correspondence was so extensive that free mail privileges were a big part of why he wanted the job — made the mail work.

He did not, however, make it cheap. And neither did his successors. Mailing a one-page letter in the first half of the 19th century cost 25 cents, or about US$6.00 in today’s money. Though by law the post office held a monopoly on the delivery of mail, the high price point created an irresistible opportunity for private companies. Because they were allowed only to deliver packages, these companies would fill trunks with letters and then deliver them as “packages.” One of the renegades who carried mail in steamer trunks to Buffalo on boats and trains up the Hudson River was a broad-shouldered young man named Henry Wells. Wells went on to start his own stagecoach delivery company, which specialized in the storage and delivery of gold in San Francisco. His company, Wells Fargo, doesn’t deliver mail any longer, but it is the most valuable bank in the United States.

Initially, the Postal Service fought such disruptive services — in the 1830s and 1840s, couriers were often arrested as they disembarked from trains and ships. As time went on, though, the government and the private carriers reached an awkward détente (what might now be called a state of “co-opetition”), with private carriers buying and canceling stamps, then sticking the letters in their own bags. By the 1850s, the post office routinely contracted with private handlers to haul mail across the country as the West opened.

Some of the private contractors, meanwhile, were taking the most valuable parts of the post office’s business. The exploits of the Pony Express (more formally, the Central Overland California & Pike’s Peak Express Company) are justifiably legendary. Its riders took as little as 10 and a half days to cover the full distance from Missouri to California. Less well known than the bravery of the riders is the jaw-dropping price the Pony Express charged: $5.00 a letter, or roughly $130 in today’s prices.

Leonard traces parallels between the post office and the broader sweep of economic history. First, the post office squeezed the maximum it could out of men and horses. Then it embraced the new transportation technology with a vengeance. It put mobile mail sorting rooms on trains in the 19th century, and in the 20th century, it pioneered delivery via air.

Leonard’s treatment of the history of airmail is particularly riveting. Starting in 1911, airmail service was for many years both dangerous — so dangerous that the U.S. Army Air Service would not let its pilots do it — and money-losing. One of the lessons of Leonard’s broad sweep of history is that progress, within both the Postal Service and its private competitors, was dearly bought, with plane crashes, technological fiascos, and bankruptcies.

Starting in 1911, airmail service was for many years both dangerous and money-losing.

In the last section of this engaging and concise book, the story of the post office comes full circle: Having largely won the war with private mail carriers in the 19th century, the organization again takes up the fight in the late 1970s with the rise of overnight delivery service Federal Express. Pressed by Congress to give up its mail handling monopoly, the post office enters what feels like a period of decline and diminishment.

Like so many other incumbents that thrived in an era in which the printed word dominated, today the Postal Service is having difficulty amid the disruptions of the digital age. Mailed invitations have given way to electronic invitations, handwritten letters to email. Many of the businesses that were built on the existence of this cheap, pervasive communications platform — greeting cards, mail-order catalogs, magazines — are themselves struggling.

The U.S. Postal Service is in the unenviable position of having to offer universal, highly reliable service while grappling with perennial financial problems. Leonard writes with a hard-nosed understanding of the organization’s current problems, but also sympathy and a fair amount of hope. The biggest delivery service in the world, the post office last year delivered 154 billion pieces of mail, reaching every residence in America six days a week (and delivering packages for Amazon on Sundays) — still an extraordinary achievement that no other company can match.