Alexander Hamilton is having a moment. The fantastic Broadway musical Hamilton (go see it, if you can afford a ticket on the secondary market) has restored the oft-forgotten founding father and architect of America’s economic infrastructure to his rightful place at the center of our national narrative. Now a short, intriguing new book, just published by Stephen S. Cohen and J. Bradford DeLong  — scholars at the University of California at Berkeley — highlights another overlooked aspect of Hamilton’s legacy. 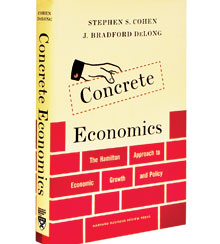 Early in this country’s history, the authors of Concrete Economics: The Hamilton Approach to Economic Growth and Policy (Harvard Business Review Press, 2016) argue, Hamilton established a precedent of designing a pragmatic approach to economic development. This pragmatic approach is one that was followed to great effect, the authors argue convincingly, for nearly 200 years. And it is one, they argue somewhat less definitively, that has been abandoned in the past 40 years — which helps account for some of America’s less-than-satisfying economic performance.

The authors aren’t talking about ideology in the traditional left/right, libertarian/socialist sense. Rather, they view ideology (dealing in abstractions, knowing things before they happen) as being in opposition to pragmatism (focusing on achieving specific concrete goals). “What we do know is that since the days of Hamilton, it is a fact that America’s successful economic policy has been pragmatic, not ideological,” they write. “It has been concrete, not abstract.”

Cruising quickly through two centuries of American economic history, the authors argue that the controversial template that Hamilton laid out in the late 18th century — “pushing policies to promote industry, commerce, and banking” — worked quite well and endured. The early lattice of tariffs, infrastructure spending, and public investments enabled America’s Industrial Revolution, and persisted through the 19th and 20th centuries. Despite sharp political disagreements over economic issues, including Andrew Jackson’s hostility toward the Bank of the United States and the fierce debates over the interventions of the New Deal, the policy pendulum has in fact swung back and forth in a relatively narrow band. Successive waves of changes — Teddy Roosevelt’s reforms, the New Deal’s “pragmatic experimentalism” aimed at fixing the housing and finance systems, and Eisenhower’s programs of funding interstate highways and government research — added layers to Hamilton’s original platform. And it was all about getting things done. “There were no questions of theory or ideology to wrestle with,” the authors write.

So what has changed in the last 40 years? Two things. First, other countries, especially the rising powers in Asia, adopted America’s Hamiltonian efforts: promoting rapid economic growth through developing manufacturing, using trade barriers to protect domestic industries, and investing in productivity-enhancing infrastructure. “It is not wrong to say that the East Asian development model was invented in the United States,” Cohen and DeLong write.

Second, the U.S. response to this development was less than practical. Cohen and DeLong argue that American businesspeople, intellectuals, and policymakers believed (this is the ideology part) that it was fine to move manufacturing jobs to Asia and elsewhere because the U.S. could easily develop new, high-value industries. And they further believed that three principal sectors — finance, real estate, and healthcare, all of which were propelled in part by government policy — would provide the necessary growth. And although these industries have created a large number of jobs, Cohen and DeLong argue that they haven’t been the same catalysts for growth and high-income jobs and new industries that the building of railroads or highways was in previous generations. Worse, finance and real estate are prone to developing bubbles and busts.

Cohen and DeLong provide a valuable lesson to people who run organizations of any type: public, private, for-profit, nonprofit. Ideologies can be very useful in founding a university or developing a theory. To make things happen in the real world, however, you have to be relentlessly pragmatic. It’s not enough to set up an intellectual frame for understanding how things should develop. You have to put plans in place aimed at achieving specific goals and outcomes — and then reassess them quickly if they don’t work out.

To make things happen in the real world, you have to be relentlessly, consistently pragmatic.

But I also think the authors are a little too down on America. In many ways, the original system that Hamilton laid down, however creaky it has become through successive additions over the years, continues to work. Sure, the U.S. has failed to replace all the manufacturing jobs it has lost. But the narrative doesn’t really account for the many highly pragmatic Hamiltonian developments of the past few decades. Think about all the new companies and new industries that have been able to develop scale and scope very quickly owing to the ready availability of financing, key government investments, and light regulation. The renewable energy industry has grown by leaps and bounds thanks to a network of incentives and research support. Fracking, which has liberated huge reserves of natural gas and oil from the ground, was made possible in part by the highly pragmatic approach taken by government and industry. The Internet — and all the U.S.-based global businesses that were ultimately built on it — grew out of a Defense Department program.

The U.S. may be 240 years old. But, as the song from Hamilton goes, in some crucial ways, it is still young, scrappy, and hungry.