The storyline of capitalism—and the technological innovation that simultaneously supports and drives it forward—is almost always one of ever-greater personal freedom and opportunity. Slaves and serfs, whose families had been chained to the plows of noble-born landowners generation after generation, are transformed into wage earners who sell their services in demand-driven labor markets. Wage owners pull themselves up by their bootstraps and educate their children, who then enter the professional ranks. With the liberal application of hard work, inventiveness, or entrepreneurial chutzpah, anyone can rise through the ranks of society. The sky is the limit. Or is it? 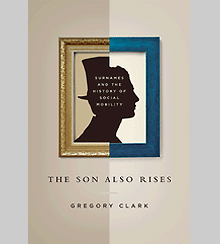 This is the question that Gregory Clark, economics professor at the University of California, Davis, seeks to answer in his new book, The Son Also Rises: Surnames and the History of Social Mobility (Princeton University Press, 2014). Clark has a predilection for investigating interesting questions, as well as for literary puns. His last book, A Farewell to Alms: A Brief Economic History of the World (Princeton University Press, 2007), sought to explain why the Industrial Revolution sparked and caught fire in England, and not in other parts of the world. His Darwinian answer was that England was peopled by descendants of the upper classes, who over hundreds of years had survived at higher rates than people in the lower classes. As a result, English upper class values, such as hard work, rationality, and education, which were conducive to an industrialized society, also survived.

Clark figured this out by collecting and analyzing data on the English economy from 1200 to 1870. In The Son Also Rises, he uses a similarly data-driven approach. This time, he uses uncommon surnames, such as Pepys, “to track the rich and poor through many generations in various societies—England, the United States, Sweden, India, Japan, Korea, China, Taiwan, and Chile.” Specifically, he matches up the wealth of parents and that of their offspring. The more correlation, the less social mobility.

Just as Thomas Piketty’s Capital in the 21st Century (Belknap Press, 2014), calls into question the role of capitalism in wealth creation, Clark calls into question the role of capitalism in social mobility. But both conservatives and liberals will find justification for their views in the facts uncovered in The Son Also Rises. Clark, who rightfully opens his preface with the words, “This book will be controversial,” found to his surprise that intergenerational social mobility cannot be taken for granted. Industrialization did not move wealth to the wider population, at least not as freely as the prevailing free enterprise storyline would suggest. (Clark basically says that “a hundred years of research by psychologists, sociologists, and economists” into social mobility has all been incorrect.)

Instead, Clark’s research reveals that the global level of social mobility is basically unchanged over the past 800 years. In England, for instance, he finds that the level of social mobility was the same after the Industrial Revolution as it was before it. “The rich beget the rich, the poor beget the poor,” Clark concludes. “Social status is inherited as strongly as any biological trait, such as height.”

But Clark does not say that mobility doesn’t exist, or that social positions never change. Indeed, his research reveals that upward and downward mobility are both continuously at play in human society. One critical factor is the intermarriage between rich and poor, which over time creates a constant regression to the mean. “In the end, the descendants of today’s rich and poor will achieve complete equality in their expected social position,” explains Clark. “This equality may require three hundred years to come about,” but it will inevitably come, unless a family takes dramatic steps (for example, through its choice of marriage partners) to maintain its position in society.

For me, the salient point is that social mobility is being driven by “innate inherited abilities,” not by the ascendancy of capitalism or democracy or any other economic or political ideology. People born rich may go on to be successful, but wealth is not the most important thing they inherit. Far more important are nature and nurture: the genetic abilities they get from their parents (which they will only pass on if they marry people as capable as themselves), and the confidence, education, and connections their families provide.

This is a difficult message for the unlucky people born to less capable parents; they have high barriers to social mobility, as they have throughout history. Capitalism may make it easier for some individuals to realize their potential, but it does not create that potential in the first place. That’s an insight worth remembering when you hear claims to the contrary.