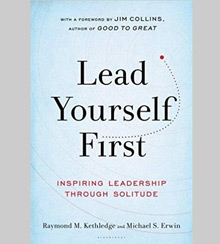 On July 4, 1845, Henry David Thoreau went to the woods to live deliberately. After spending two years, two months, and two days in a 150-square-foot cabin that he built himself for $28.12 and a halfpenny, Thoreau had worked out the gist of the transcendentalist classic Walden; or, Life in the Woods. In it, he wrote, “I never found the companion that was as companionable as solitude.”

CEOs and other leaders would do well to get on companionable terms with solitude, too, according to first-time authors Raymond M. Kethledge, a U.S. Court of Appeals judge, and Michael S. Erwin, a leadership development consultant and assistant professor at West Point. Leaders don’t necessarily have to get off the grid and live in a hut for two years. But in Lead Yourself First, the authors make an extended argument that leaders should reserve some alone time “to find clarity, creativity, emotional balance, and moral courage.” They illustrate their thesis with numerous examples.

Like Henry David Thoreau, CEOs and other leaders would do well to get on companionable terms with solitude.

In the week before D-Day, for instance, Dwight D. Eisenhower took to his tent to mull the critical decision to begin the invasion of Normandy with a parachute drop and glider landings behind the Nazi lines. The casualties were estimated to be 50 percent among the paratroopers and 70 percent among the glider troops. But without them, the troops landing at Utah Beach would face the full might of the Germans. As Eisenhower thought through the decision, he realized that the airborne operation was a linchpin in the success of the Utah Beach assault, which, in turn, was a linchpin in the success of the entire invasion. He gained the analytical clarity he needed to make that hard decision in solitude.

The role of solitude in creativity is, of course, well established. Often, the intuitive leap to “Aha!” requires an incubation period. For Thomas Edward Lawrence, Kethledge and Erwin tell us, the incubator of insight was an epic, 10-day bout with dysentery that left him sitting in a tent in the desert as the Arab Revolt raged around him in March 1917. On his sickbed, Lawrence realized that the Arabs didn’t need to destroy the far stronger Ottoman Empire force that occupied their land. Instead, the scattered Arabian tribes could undertake an audacious and coordinated program of guerrilla warfare, one that would — and eventually did — induce the Ottoman Empire to abandon Arabia. “Thus,” write the authors, “the legend of Lawrence of Arabia was born, and the Arab Revolt…was directed toward final victory.”

To illustrate the application of solitude in emotional balance, Kethledge and Erwin offer the example of Abraham Lincoln. In July 1863, after the Battle of Gettysburg, the Union forces under General George Meade had the opportunity to cut off and destroy the Confederate Army commanded by Robert E. Lee — an action that could have precipitated the immediate end of the Civil War. Lincoln repeatedly urged Meade to move quickly, but Meade dallied for several days and Lee’s army escaped with just hours to spare. Lincoln, devastated, retired to his room, wept, and poured out his distress and anger in a letter to Meade — which he never sent. Lincoln used solitude to regain his emotional balance.

Finally, write Kethledge and Erwin, leaders can use solitude to tap into the courage they will need to face difficult challenges. Here, Dr. Martin Luther King provides a moving and dramatic example. In January 1956, as the Montgomery, Ala., bus boycott sparked by Rosa Parks’s refusal to give up her seat became more and more difficult to sustain, and the personal threats against King and his family escalated, King found himself “faltering and growing in fear.” On the night of January 27, with his family asleep, he sat in his kitchen and prayed for guidance. “And,” as King later said, “it seemed at that moment that I could hear an inner voice saying to me, ‘Martin Luther, stand up for righteousness. Stand up for justice. Stand up for truth. And lo I will be with you, even until the end of the world.’” And so he did.

That’s the gist of Lead Yourself First. The rest of the book is a parsing of how solitude can nurture different aspects of clarity, creativity, emotional balance, and moral courage, illustrated by many more well-told tales of famous and not-so-famous leaders — including primatologist Jane Goodall and Nobel laureate Aung San Suu Kyi — who stepped away from the hubbub around them to enhance those traits. It adds up to a compelling, if perhaps overly long, exposition on the role of solitude in leadership.