Competing Against Luck: The Story of Innovation and Customer Choice

Since 2005, Strategy& has been conducting an annual study of the 1,000 biggest corporate R&D spenders. One conclusion has held true through all 11 installments: There is no statistically signiﬁcant relationship between the ﬁnancial performance of the so-called Global Innovation 1000 companies and their R&D spending. 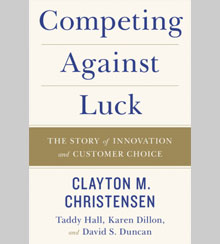 The fact that, in 2015, these companies collectively spent US$680 billion buying R&D lottery tickets bothers Harvard disruption guru Clayton Christensen. “Innovation processes in many companies are structured and disciplined and the talent applying them is highly skilled.… From the outside, it looks like companies have mastered an awfully precise, scientific process,” he and coauthors Taddy Hall, Karen Dillon, and David S. Duncan write in Competing Against Luck: The Story of Innovation and Customer Choice (HarperBusiness, 2016). “But the results show that, for most companies, innovation is still hit or miss.”

Christensen and his coauthors think they have an explanation for this conundrum: Companies know a lot about the characteristics and attributes of their customers, but they don’t know why customers buy their products and services. In other words, companies know the correlations between types of customers and their products and services, but they don’t understand what causes customers to buy their offerings. And without grasping causation, they can’t be sure whether their R&D spending will yield a winning ticket.

Competing Against Luck proposes that companies get to causation by asking customers, “What job did you hire that product to do?” This is a question that surely would have warmed the heart of Theodore Levitt, the Harvard Business School professor who immortalized an otherwise forgotten guy named Leo McGivena for saying “Last year one million quarter-inch drill bits were sold — not because people wanted quarter-inch drill bits but because they wanted quarter-inch holes.” But Christensen et al. take McGivena’s insight far beyond Levitt’s interest in customer needs and desires by cobbling together an approach to innovation that they plainly, if a bit clunkily, call the Theory of Jobs to be Done (aka Jobs Theory).

Jobs Theory holds that to create a product and/or service, you must first understand why your prospective customers will “hire” it. Then, you must translate that understanding into a job spec: “What do I need to design, develop, and deliver in my new product offering so that it does the consumer’s job well?” And finally, you must integrate your company’s capabilities and processes in order to “nail the job consistently.”

Anything that promises to connect $680 billion in R&D spending to actual financial performance is worth a flyer.

Southern New Hampshire University (SNHU) followed a process like this in building its distance learning program. When Paul LeBlanc was appointed president of SNHU in 2003, it was a small liberal arts college with a “sleepy” online education program. By 2016, the school was approaching $450 million in revenue — the result of a 55 percent CAGR over five years. What accounted for SHNU’s growth spurt? According to Christensen, the school realized that the job an online student, who was probably serving in the military, raising a family, or working full-time, was trying to get done was very different from the job a newly minted high-school grad heading off to a four-year college was trying to do. So it stopped treating nontraditional students like traditional students.

I can attest to the effectiveness with which SNHU crafted and delivered on its job spec for distance learners. A few years ago, my wife decided to enroll in an online MFA program and requested application packages via the websites of three schools. She was pleasantly surprised when, just minutes after sending the requests, an SHNU admissions counselor called her. Even better, by the time the applications from the other two schools arrived in the mail, she not only had been accepted into SNHU’s MFA program, but also was already attending classes! Eighteen months later, she graduated.

SNHU is only one of the dozen or so cases drawn from a variety of industries that are described in Competing Against Luck. There’s Intuit’s QuickBooks, which, the authors explain offered, “half the functionality of more sophisticated accounting software at twice the price,” but succeeded nonetheless because the company realized that small business owners didn’t want to learn how to do their books. They just wanted their books done. There’s Kimberly-Clark’s Depends, which succeeded because the company delved into the stigma and struggle attached to adult incontinence, and designed a diaper that was less like a baby’s diaper and more like an adult’s underwear. There’s GM’s OnStar service, which didn’t take off until the division realized that the job that its customers really wanted done was not a high-end, mobile concierge service, but 24/7 safety and emergency response when they were on the road. “In every case,” write the authors, “uncovering why customers make choices allows organizations to better create solutions that get hired.”

Of course, as with most business theories, putting Jobs Theory to work is going to require some effort. Uncovering the jobs that lurk behind a decision to buy is a granular task that must be trusted to produce the holy grail of innovation: actionable insight. Transforming jobs into job specs means addressing every aspect of the customer experience, from pre-contact to consumption. And aligning the business to the job to be done might require rebuilding a company from the ground up.

That said, there is something that feels intuitively right about Jobs Theory. It jibes with why I buy, and why I don’t. Moreover, anything that promises to connect $680 billion in R&D spending to actual financial performance is worth a flyer.