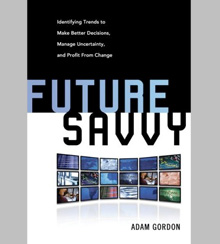 The world is moving faster than ever, right? Didn’t Alvin Toffler, who coined the term future shock, nail it when he said that the rate of change was going to increase? The rate of change is increasing, but, arguably, the impact of change on human culture has been holding steady since at least the Industrial Revolution, and maybe longer. I’ve wanted to see that case made for years, and futurist Adam Gordon makes it very well here, in an excerpt from his book Future Savvy. The book itself is a guide for prognosticators and scenario planners, a set of warnings against such common errors as overreliance on numbers, overlooking your own bias, and ignoring the oscillations of history by assuming that “greater, faster, different” will continue at an exponential rate. Of course, this argument shouldn’t lead you to complacency — the historical rate of change alone is plenty disorienting.

While we may experience “future shock” in response to change around us, and it often feels as though we are living in a unique era of unprecedented change and that “time is speeding up,” this perception does not stand up to logical or empirical analysis and is part of a low-quality world view that causes errors in forecasting.

It is true that the world has seen new products and services and lifestyles rapidly drive out old standards and traditions, particularly through transformation to information and communication technologies in the past twenty-five years. And these advances have yet to combine fully with other emerging technologies, principally bio- and nanotechnologies, that appear likely to allow us to build materials and engines at the atomic level, and even to take control of life itself and create synthetic life. Brain sciences promise transformational enhancements in human cognition and genuine artificial intelligence, among other things. However, these expected innovations and many others still do not mean that we are or will be experiencing more or faster change than that experienced in previous eras.

Over the past two centuries change has been at least as rapid and profound, as the world changed to accommodate the steam engine, railways, the automobile, airplanes, electricity, refrigeration, anesthesia, vaccines, antibiotics, X-rays, steel, concrete, the telephone, radio, movies, etc. Not only were these various new technologies and capabilities every bit as disorienting as [those] we face today, but they were also as profound. The need for railway schedules led to the first standardization of time. The needs of industry led to humans becoming primarily city and metropolitan dwellers in the past century, after being village and rural dwellers since the dawn of humanity. Early communications technologies created new mass industries in the media and entertainment. Contraceptive power over reproduction has allowed new roles for women, which has led to profound social change in work and home life.

This is to say that it is in fact very likely — if one could adequately judge such a measure — that on most fronts we are experiencing less future shock now than people 100 years ago. We are able to get fancy refrigerators that will warn us when food is going bad, but this does not compare with the original innovation of domestic and commercial refrigeration that fundamentally changed how kitchens or shopping were organized, and which created and broke whole industries (ice cutting and ice-transport shipping disappeared). Similarly, there may be innovations in noninvasive [surgery] and microsurgery, but does this compare with anesthesia for change value? We are amazed we can reach anyone at any time on their cell phone, but this is no more amazing than the telegraph that replaced stage coaches and smoke signals. We think we are at the fastest, most fundamentally disorienting moment in history, but people thought this in 1850, too, and in 1950, and had at least as much cause to.

So while the transitions we face in the early twenty-first century certainly involve constant, rapid change, they are not unique in terms of pace, scale, or reach, and there is nothing to suggest change is faster and more pervasive than before, or that it is speeding up. It is possible — probable even — that in new areas such as biotechnology or nanotechnology, change will be exponential for a while as discoveries are made and myriad product opportunities found, just as previous technologies also had their exponential period. But this will soon pass. As a systems view suggests, the “exponential change” view of the future is invalid, and forecasts based on this view will overestimate change. Understanding the balancing forces at work in all the systems around us helps us reign in and reality-test forecasts that are premised on this fallacy.