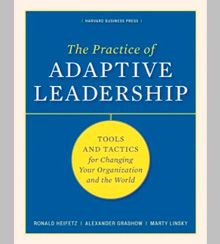 Callousness, which manifests as an inability or refusal to consider the needs, wants, and desires of others, is a trait common to many bad leaders. When demonstrated by a leader who is seeking to create change, it’s a surefire prescription for failure; the very people who are necessary to the successful adaptation of the organization are marginalized and become enemies of change. On the face of it, this excerpt from The Practice of Adaptive Leadership, a how-to book extending Ronald Heifetz’s seminal work on adaptive leadership, written with his associates Alexander Grashow and Marty Linsky, is a simple reminder for change leaders to keep their enemies close. But it is also much more. The authors define opponents of change in more humane terms, and offer a complex analysis of what happens in the minds of leaders when they get “connected to the opposition” and accept responsibility for the losses that change inevitably creates. And they explain how opponents respond. This excerpt is an antidote to callousness.

Excerpted from chapter 10 of The Practice of Adaptive Leadership: Tools and Techniques for Changing Your Organization and the World

Who is most likely to oppose what you’re trying to do? Potential opponents are stakeholders who have markedly different interests from yours and who stand to risk losing the most if you and your initiative go forward.

Once you’ve identified the opposition, stay close to them, spend time with them, ask for their input on your initiative, listen closely to their reality (especially where it differs from yours), and take their temperature to assess how much heat you are putting on them and how desperate they are becoming. Regularly get together for coffee, include them in meetings, and let them know you value their perspective and insights on your intervention. Of course, it is not a lot of fun to spend time with “the enemy.” Recently, we had a hard time persuading the CEO of a governmental agency who was pushing for adaptive change to spend time with officials from the union that represented many blue-collar employees and fought him at every opportunity. Understandably, he did not look forward to the abuse he received at meetings with these officials. But it was critical for him to do so if he hoped to win some of them over, find a more integrative solution, or at least prevent them from stopping his work.

Resisters to your initiative are people who feel most threatened by it. They may believe that they will not be able to make the changes you recommend, that they might lose their job, or that they’ll be worse off in some way if the initiative is carried out. You may agree or disagree with their perception, but it is their perception that counts for your purposes. Resist any temptation to try “straightening them out.” Our experience suggests this would be a fool’s errand and could actually set you back by stiffening their resistance. (Nobody likes being told that they “shouldn’t feel that way.”) Instead, accept that what you’re trying to do is not in their interest. Compassion and empathy have their own reward in heaven, but they are also critical tools for comprehending the potential losses at stake for your opposition.

Authentic empathy has consequences. If you really understand the losses that your initiative would inflict on your opponents, you have to take responsibility for inflicting them. From your perspective, you did not create the adaptive challenge at hand, and your purpose is simply to mobilize people to grapple with the problem; you are not deliberately trying to make their lives miserable. It might be a lot harder to keep pushing your initiative forward single-mindedly when you have compassion for the people who will have to bear the losses.

Second, stakeholders will be looking to you to project certainty and thereby diminish their worry that the costs they will pay might not be worthwhile. Empathizing with your opponents might lead you to ask yourself, “Am I really doing the right thing?” If you start doubting your cause, you may end up revising your plan or even abandoning it, or undermining the confidence of some allies.

So why force yourself to spend time with your resisters? First, you will never seem as evil in person as you can be in people’s imagination. Simply spending time in their presence can help take the edge off their hostility and thus soften their determination to block your efforts. For just this reason, when Marty [Linksy] was advising clients on media relations, he always encouraged people to accept invitations to go on hostile talk-radio shows or speak before opposition audiences.

There is another reason to make yourself spend time with resisters: by meeting with them, you can acknowledge the sacrifices you are asking them to make and how difficult and painful those sacrifices may be. For some people, that is all they need to hear in order to begin feeling less hostile toward you and your idea. Some may actually become supporters, while others may at least tone down their opposition.

Finally, spending time with the opposition enables you to assess firsthand how much pressure they feel from your initiative. You can then calibrate your tactics accordingly. For example, suppose you meet with union officials to discuss a cost-saving initiative that would require greater employee contributions to their generous health benefit plan. Watching body language and nonverbal cues in informal conversations might well give you information that you could not get in a more formal setting to indicate the importance to the membership of maintaining the current benefit as compared to other potential cost-cutting measures.

Reprinted by permission of Harvard Business Press. Excerpt from The Practice of Adaptive Leadership: Tools and Tactics for Changing Your Organization and the World. Copyright 2009 Cambridge Leadership Associates. All rights reserved.