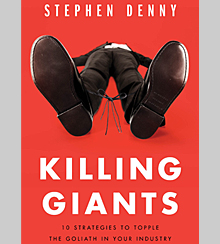 The conventional wisdom says never start a price war because it will end up hurting you as much as the other guy. But sometimes a surgical strike on a targeted segment of a market can hit competitors in a way in which responding hurts them far more than it hurts you.

That’s exactly what happened in the story you are about to read from Stephen Denny’s terrific new book, Killing Giants. In it, a candy bar marketer at Hershey’s used surgical pricing to win share in a targeted market segment from Nestlé, whose competing candy bar boasted a market share almost 10 times as great. Nestlé couldn’t afford to stay in the fight, especially when customers in other segments started demanding the same discount, threatening major losses. When the company backed down, the shrewd Hershey’s staffer won a sweet victory that came along with a 150 percent increase in sales.

Who says you can’t beat the market leader?

Excerpted from Chapter 4 of Killing Giants: 10 Strategies to Topple the Goliath in Your Industry

Sometimes, the giant you face is so big, you need to look up just to see the bottoms of their shoes. Imagine facing a competitor’s flagship product from a position as a bottom-tier brand so small you literally have no above-the-line marketing budget at all. Now, your job is to go out there and take a chunk out of your giant’s hide.

That’s pretty much the story that marketer Steve Mullen told me when he looked back on his days running Hershey’s Krackel brand in the eighties. Krackel was a 17-million-dollar brand facing a behemoth, Nestlé’s $150-million Crunch franchise. “We literally had no spending budget,” Mullen told me. “It didn’t justify any financial support whatsoever.” When viewed from this perspective, it doesn’t seem like Mullen and Krackel had much of a chance to do anything significant to upset the balance of power in this marketplace. What was needed was a different perspective, and in April of 1985, Mullen quickly found the vantage point he needed, beginning with his choice of the vending machine class of trade, a relatively quiet backwater channel that represented roughly 7 percent of Hershey’s total volume.

Your typical candy bar vending machine has thirty to fifty slots, and the vending distributors who keep them stocked and determine their in-machine assortments don’t like to dedicate two slots to the same category of candy bar. So either you get the slot or your competitor does. This was a zero-sum, all-or-nothing proposition. And Krackel at that moment was a nonentity in vending with absolutely nothing to lose.

“There’s a limit to how much you can usually put behind a brand in trade support, but in Krackel’s case it didn’t have anything,” Mullen told me. “It struck me that if we got our discounts down deep enough, one of two things would happen. One is that either the trade would de-list Nestlé from all of their vending machines just because Krackel would be so much more profitable — and the consumer didn’t differentiate that much between brands. The other was that Nestlé would have to meet our discounts. Either Krackel would pick up more facings — the number of slots that the bar would occupy — or Nestlé would have to fork up so many dollars that they would take money away that they might use to support other brands, too. So it was a win-win.”

Mullen’s proposal to management was to give the vending distributors a 30 percent trade discount on Krackel where other brands hovered in the 5 to 10 percent range. This was understandably a bold move. “I originally took it to my boss and he choked on it. He said we couldn’t afford it. Giving away thirty points was a big deal. I said, ‘Think of the options. If Nestlé tries to match us, the dollar cost to them is huge. That, or we blow Krackel out in every vending machine in the country.’” With nothing to lose — and aiming at the brand that paid for so many of its chief competitor’s other brands — Krackel could play the role of spoiler. “My boss balked at it at first, but the more he looked at it, the more he got this smile on his face. He said this is a pretty evil plot. The big guy can’t win on this and we can’t lose.”

Krackel launched across the country with its jaw-dropping trade discount, forcing Nestlé to meet this unexpected threat with a similar discount across the base of its entire Crunch volume in the vending class of trade. But that didn’t last. Not only did it drain the discretionary spending budgets across their entire company to fund this unanticipated attack, but Nestlé’s major national accounts — their big customers in the grocery and mass merchant channels — soon learned of this new corporate largess that apparently was not mentioned in their last most-favored-nations pricing meetings. So this temporary discount aimed at dealing with an inconsequential competitor in an inconsequential class of trade threatened to cascade across the entire base of Nestlé’s business. Once the pain was too great, Nestlé folded, leaving Krackel as the last bar standing and boosting the brand’s revenue by an incremental $25 million. More than that, it provided an entry point for other Hershey products into that vending class, riding the coattails of this once lowly brand.

What can we take away from Krackel?

This isn’t a strategy for everyone. But it does give us reason to look for areas of relative advantage, where localized efforts can have wide-reaching consequences. If we can force the giant’s hand, we’ve achieved a strategic victory.

Reprinted by arrangement with Portfolio, a member of Penguin Group USA, Inc. Copyright © 2011 by Stephen Denny.