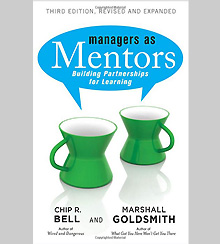 Leaders can have sophomore slumps, too. As you know, sophomore means “wise fool,” and the term is usually associated with the presence of overconfidence and subsequent missteps. But the wise fools in leadership positions are much like Marshall Goldsmith’s depiction of himself in the anecdote below, which is taken from the new edition of Managers as Mentors.

The story shows how difficult it can be for a leader to transcend his or her own deep-seated psychological issues. Like most seasoned professionals, I know that difficulty firsthand. I lead a team of 12 full-time staff members and about as many part-time contractors. When I first took the job, I sought an image of impeccability. It took every ounce of discipline that I had, and to maintain that standard, I sometimes regarded everything else in my life as a distraction.

But I gradually realized I couldn’t maintain that image. I slipped as a leader, and I had to come to terms with that. I am no longer the kind of wise fool who believes that trying to impress my staff, and my superiors, is essential to my job. I have had to learn that while caring even more about what happens to the people I work with, I must give up my concerns about what they think of me. I am grateful to this excerpt because, without belaboring the obvious, Marshall Goldsmith shows that he has been there, and he shows how to come out on the other end of sophomoric self-obsession.

An excerpt from chapter 7 of Managers as Mentors: Building Partnerships for Learning, 3rd Edition


As a Ph.D. student at UCLA in the early 1970s, I had a self-image of being “hip” and “cool.” I believed I was intensely involved in deep human understanding, self-actualization, and the uncovering of profound wisdom. Early in my Ph.D. program, I was one of thirteen students in a class led by a wise teacher, Bob Tannenbaum. Bob had come up with the term “sensitivity training,” had published the most widely distributed article to appear in the Harvard Business Review, and was a full professor. He was an important person in our department at UCLA.

In Bob’s class, we were encouraged to discuss anything we wanted to discuss. I began by talking about people in Los Angeles. For three full weeks I gave monologues about how “screwed up” people in Los Angeles were. “They wear those $78 sequined blue jeans and drive gold Rolls Royces; they are plastic and materialistic; all they care about is impressing others; and they really do not understand what is deep and important in life.” (It was easy for me to be an expert on the people of Los Angeles. I had, after all, grown up in a small town in Kentucky.)

One day, after listening to me babble for three weeks, Bob looked at me quizzically and asked, “Marshall, who are you talking to?”

“I am speaking to the group,” I answered.

“Who in the group are you talking to?”

“Well, I am talking to everybody,” I replied, not quite knowing where he was headed with this line of questioning.

“That is interesting. Let me think about it,” I replied. Then (after careful consideration) I said, “You?”

He said, “That’s right, me. There are twelve other people in this room. Why don’t you seem interested in any of them?”

Now that I had dug myself into a hole, I decided to dig even deeper. I said, “You know, Dr. Tannenbaum, I think you can understand the true significance of what I am saying. I think you can truly understand how ‘screwed up’ it is to try to run around and impress people all the time. I believe you have a deep understanding of what is really important in life.”

Bob looked at me and said, “Marshall, is there any chance that for the last three weeks all you have been trying to do is impress me?”

I was amazed at Bob’s obvious lack of insight! “Not at all!” I declared. “I don’t think you have understood one thing I have said! I have been explaining to you how ‘screwed up’ it is to try to impress other people. I think you have totally missed my point, and frankly, I am a little disappointed in your lack of understanding!”
He looked at me, scratched his beard, and concluded, “No, I think I understand.”
I looked around and saw twelve people scratching their faces and thinking, “Yes. We understand.”

Suddenly, I had a deep dislike for Dr. Tannenbaum. I devoted a lot of energy to figuring out his psychological problems and understanding why he was confused. But after six months, it finally dawned on me that the person with the issue wasn’t him. It wasn’t even the people in Los Angeles. The person with the real issue was me. I finally looked in the mirror and said, “You know, old Dr. Tannenbaum was exactly right.”

Two of the greatest lessons I began to understand from this experience were (1) that it is much easier to see our problems in others than it is to see them in ourselves, and (2) even though we may be able to deny our problems to ourselves, they may be very obvious to the people who are observing us.

There is almost always a discrepancy between the self we think we are and the self the rest of the world sees in us. The lesson I learned (and strive in my professional work to help others understand) is that often the rest of the world has a more accurate perspective than we do. If we can stop, listen, and think about what others see in us, we have a great opportunity. We can compare the self that we want to be with the self we are presenting to the rest of the world. We can then begin to make the real changes needed to align our stated values with our actual values.

I have told this story at least three hundred times, and I have thought about it more frequently than I have told it. Often when I become self-righteous, preachy, holier-than-thou, or angry about some perceived injustice, I eventually realize that the issue is not with the other person or people. The issue is usually me.

Today I work mostly with executives in large organizations. I help them develop a profile of desired leadership behavior. Then I provide them with confidential feedback, which allows them to compare their behavior (as perceived by others) with their profile of desired behavior. I try to help them deal with this feedback in a positive way, to learn from it, and (eventually) to become a good role model for the desired leadership behavior in their organization. Although I am supposed to be a “coach,” very little of my coaching involves “sharing my wisdom.” Most of it involves helping my clients learn from the people around them. In this way, the lesson I learned from Bob Tannenbaum has not only helped me in my personal life; it has helped shape the course of my professional life.

Reprinted with the permission of  Berrett-Koehler Publishers, 2013.