The business news headlines in the early fall of 2015 read like a scandal sheet. In September, the former owner of Peanut Corporation of America was sentenced to 28 years in prison for knowingly selling contaminated peanut butter that killed nine people and sickened hundreds more. Turing Pharmaceuticals, launched earlier this year by a hedge fund manager, purchased a 62-year-old drug that treats a parasitic infection called toxoplasmosis — the only drug of its kind — and bumped the price from $13.50 per tablet to $750. Volkswagen was coping with the fallout from revelations that engineers may have equipped diesel-powered cars with software aimed at deceiving emissions tests. 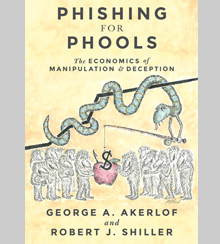 We tend to think of the people at companies who engage in such behavior as outliers, the few bad apples that spoil the barrel. But in their new book, Phishing for Phools: The Economics of Manipulation and Deception (Princeton, 2015), George A. Akerlof, Koshland Professor of Economics at University of California, Berkeley, and Robert J. Shiller, Sterling Professor of Economics at Yale University, argue that we should direct our attention to the barrel instead. The barrel is free markets, which, according to tenets that go back to Adam Smith, are guided by an invisible hand that ensures the individual pursuit of profit is transformed into common good. Unfortunately, that’s not the whole story.

“Free markets do not just deliver this cornucopia that people want. They also create an economic equilibrium that is highly suitable for economic enterprises that manipulate and distort our judgment, using business practices that are analogous to biological cancers that make their home in the normal equilibrium of the human body,” Akerlof and Shiller write. “Insofar as we have any weakness in knowing what we really want, and also insofar as such a weakness can be profitably generated and primed, markets will seize the opportunity to take us in on those weaknesses. They will zoom in and take advantage of us. They will phish us for phools.”

Phishing for Phools is an extension of the authors’ work on how psychological forces can warp markets, as described in their previous book, Animal Spirits: How Human Psychology Drives the Economy, and Why It Matters for Global Capitalism (Princeton, 2009). The two Nobel Prize–winning economists — Akerlof in 2001 for his work on the market effects of asymmetric information, Shiller in 2013 for his contributions to economic forecasting — define phishing in a broader way than usual. They say it is any activity that entices us to do something that is not in our own interests, but rather in the interest of the “phisherman” (as opposed to the rational behavior assumed in conventional economic theory). They see two kinds of phishing going on in free markets. The first includes emotional and cognitive glitches. A gambling addict who feeds the paycheck needed to feed his family into a slot machine has been legally phished by a casino. The second includes misleading information that is purposely created by the “phishermen.” Investors who received doctored account statements from Bernie Madoff’s firm were illegally phished in this manner.

Whether the phishing is legal or illegal, ethical or unethical, Akerlof and Shiller see it as being driven by the natural operation of free markets: “The free-market equilibrium generates a supply of phishes for any human weakness.” The two authors endeavor to prove this by describing an ongoing epidemic in phishing in a dismayingly wide variety of market contexts: in marketing and advertising; in industries where high-pressure sales tactics are common, such as auto sales, real estate, and credit cards; politics (the market for candidates); food and pharmaceuticals; innovation; tobacco and alcohol; and finance.

You’ll likely be familiar with many of the examples in the book, which are drawn mainly from contemporary inductees into capitalism’s hall of shame: Big Tobacco and its decades-long battle to discredit the link between smoking and cancer, the S&L crisis, the junk bond crisis, the subprime loan crisis. But they are worth rereading in order to understand what they have in common — that is, how and why they are all examples of phishing.

Happily, Akerlof and Shiller identify four obstacles to free-market phishing. There are “standards bearers,” who measure and enforce quality, such as the testing and certification of electronic appliances provided by Underwriters Laboratories. There are “business heroes,” such as Better Business Bureaus (and, presumably, rating sites, like Yelp and TripAdvisor). There are “government heroes” and their legal checks, such as the Uniform Commercial Code, and also “regulator heroes” like the Food and Drug Administration.

Unhappily, however, phishing continues, and the power of those who resist it is constantly being undermined by phishermen in search of larger hauls. As a case in point, the authors offer up the sad tale of the bond ratings agencies, whose cooptation by bond issuers resulted in reckless and inflated estimates that supported and intensified the explosion of subprime mortgages during the housing boom of the 2000s.

Phishing for Phools doesn’t offer much in the way of solutions. “The free market may be humans’ most powerful tool. But, like all very powerful tools, it is also a two-edged sword,” Akerlof and Shiller write. “That means that we need protection against the problems.” However, the only protection they prescribe is a greater recognition among economists of free-market phishing — a recognition that “it is inherent in the workings of competitive markets.” That would be a good a thing, I guess. But economists could debate the merits of this thesis until the end of time, and the rest of us would still be taken for phools.