I came of age playing pinball and was unimpressed by Atari’s Pong when it appeared in the mid-1970s—even though it launched an entire industry. So, never having become an aficionado of video games, I was surprised that NYU journalism professor Adam Penenberg was able to hook me right from the beginning of his new book, Play at Work: How Games Inspire Breakthrough Thinking  (Portfolio Penguin, 2013), an expansion of a Fast Company article he wrote in 2010. 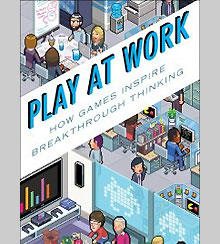 Penenberg writes about Ian Bogost, a professor of interactive computing at the Georgia Institute of Technology who designs video games that lampoon society. One of the games Bogost created is named Cow Clicker. It’s a mindless pursuit in which you collect points for clicking on a cartoon cow once every six hours and getting the members of your social networks to click on cows, too. It was meant to satirize social media, but then it became a hit. In fact, when Bogost added mooney (which is purchased with real money) to the game, some players paid for customized cows and extra points. Then Bogost removed the cows altogether and all you did was click on an open field. Many players soldiered on. What better illustration of the extraordinary power of video games to engross people could there be?

The power of video games to engage has also piqued the attention of the Defense Advanced Research Projects Agency (DARPA), the Pentagon’s R&D arm. In 2011, DARPA adapted a popular Microsoft Windows–based naval warfare simulation game called Dangerous Waters in order to discover the best tactics to program into a newly developed unmanned sub chaser. DARPA offered the game as free download on its servers and invited players to submit their tactical results. It was downloaded more than 50,000 times in a month and the best players outscored a Navy expert in tracking subs.

In addition to discussing crowdsourcing ideas, Penenberg describes how corporations and other organizations are using games and game mechanics for a variety of reasons, including changing unhealthy behaviors, training employees and increasing their productivity, and enhancing the effectiveness of marketing and customer service. For instance, the Diabetes Hands Foundation developed a Facebook game, HealthSeeker, in which players are awarded points for demonstrating healthy behaviors like skipping milk and sugar in their coffee. Microsoft developed games to enhance and speed the software debugging process by enlisting players throughout the company. LiveOps, a virtual call center operator, layered game elements, such as points, badges, and leaderboards, onto its operating platform to enhance employee performance.

The most interesting part of Play at Work is Penenberg’s inquiry into what makes games so engaging to so many of us—globally, 350 million people spend a total of 3 billion hours each week playing video games, according to Jane McGonigal, author of another book on this topic, Reality Is Broken: Why Games Make Us Better and How They Can Change the World  (Penguin Press, 2011). The short answer is that game mechanics that pose challenges and utilize continuous feedback loops have compelling cognitive hooks, and players derive satisfaction from the social relationships formed while playing games. (See Linda Holmes’s recent story for NPR for a lovely description of the latter.)
It’s all almost enough to convince me to click on a cow.