Warren Buffett, who will turn 85 this August, has had an extraordinarily long run of business success—such a long run, in fact, that there has been much speculation in recent years about how Berkshire Hathaway will fare after its chief architect is gone. Of course, many companies survive, and prosper, after the loss of charismatic leaders. Apple, for example, recently posted a record quarterly profit of US$18 billion. But as it was with Steve Jobs, the concern about Buffett is understandable—the Oracle of Omaha is credited with personally parlaying an investment in a fading New England textile manufacturer in 1962 into the unlikely conglomerate that is now perched at number four on the Fortune 500 list. 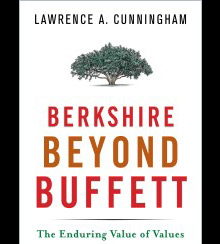 Berkshire’s 2013 revenues were $182 billion, on which the company reaped a profit of $19 billion. Under Buffett’s guiding hand, the Berkshire family has grown to include 50 or so direct subsidiaries—a few of which qualify as conglomerates in and of themselves—and the company has tens of billions of dollars of cash on hand, with which he could acquire even more. “If Berkshire were a country, and its revenues its gross national product, the company would be among the top 50 world economies, rivaling Ireland, Kuwait, and New Zealand,” writes George Washington University Law School professor Lawrence A. Cunningham, the author of Berkshire Beyond Buffett: The Enduring Value of Values (Columbia Business School Publishing, 2014).

Shelves of books have been written about Buffett and Berkshire, including Alice Schroeder’s terrific biography, The Snowball: Warren Buffett and the Business of Life (Bantam, 2008), which this magazine named as one of the best business books in 2009. But Cunningham takes a new tack: He asks what the company’s “moat” is—that is, what protection it has from competitive challenges. Cunningham rejects out of hand the idea that Buffett’s presence is the moat, writing “mortality means no person can be a moat, because that would not be a durable advantage.” It’s also not the company’s financial might, Cunningham adds. The float provided by Berkshire’s insurance businesses and its investments in the stock of other companies only “strengthen[s] Berkshire’s fortress,” he says.

“What, then, is Berkshire’s moat?” he writes. “The answer: Berkshire’s distinctive corporate culture. Berkshire spent the last five decades acquiring a group of wholly owned subsidiaries of bewildering variety but united by a set of distinctive core values.”

Cunningham finds nine shared cultural traits among Berkshire’s subsidiaries. This conveniently allows him to use “BERKSHIRE” as an acronym, even though it requires some clunky labeling. The traits:

·         Reputation, as in personal and corporate integrity

·         Self-starters, as in entrepreneurial behavior

·         Hands off, as in delegating decisions and responsibility

·         Rudimentary, as in easy-to-understand businesses

The foundation for these traits is Buffett’s investment philosophy, but often they already exist in the businesses he acquires: He buys what he values. And when the Berkshire values aren’t present or seem threatened, he spreads and reinforces them. After Buffet discovered that a senior Berkshire executive had profited personally from an acquisition, for example, he accepted the executive’s resignation and drafted a memo to all employees that warned, “Lose money for the firm, and I will be understanding; lose a shred of reputation for the firm, and I will be ruthless.”

When the Berkshire values aren’t present or seem threatened, Buffet spreads and reinforces them.

Although Cunningham’s inquiry into Berkshire’s values and culture is interesting (as are the histories of the companies that make up the conglomerate), Berkshire Beyond Buffett isn’t all that convincing. Will the company prosper without its founder? It certainly might—it’s a profit-generating powerhouse. But the book didn’t persuade me that Berkshire’s culture (and not Buffet or something else entirely) is the principal source of its competitive advantage.

Cunningham argues that a person can’t be a durable competitive moat, but isn’t Buffett exactly that? He built Berkshire one acquisition and investment at a time over a half-century. And how long is “durable” when it comes to competitive advantage anyway? There are some smart people who are convinced that there is no such thing these days.

Further, while some company cultures seem to serve as moats—the culture in Disney’s parks and resorts comes to mind—isn’t it more likely that culture is really what Cunningham characterizes as a fortress strengthener, like a float that could keep a small country above water? In and of itself, would a culture built on the “BERKSHIRE” values be able to save the proverbially doomed buggy-whip company? I don’t find these questions addressed in the book.

Despite the outstanding issues, I found Berkshire Beyond Buffett a worthy read. Cunningham’s thesis hasn’t convinced me to run out and buy a block of Berkshire’s A stock at $200,000+ per share. (Oh, to have a personal float of such magnitude!) But the book does provide insights into the values and culture that have buoyed one of the great conglomerates of all time.