In 2010, elBulli was named the second-best restaurant in the world. In 2011, superstar chef and co-owner Ferran Adrià shuttered the small restaurant in a small town on Spain’s Mediterranean coast, marking the end of a remarkable, three-decade run of culinary success. By that time, Adrià and his staff were receiving 2 million requests for reservations annually — from people who were willing to travel to the northeastern corner of Spain to eat the 8,000 meals conjured up during the six months the restaurant was open each year. Moreover, 3,000 or so of the world’s most talented culinary pros were applying for elBulli’s 30 unpaid internships. 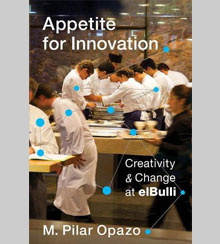 What accounted for this unprecedented level of demand from foodies and the people who feed them? In Appetite for Innovation: Creativity and Change at elBulli (Columbia University Press, 2016), M. Pilar Opazo, a post-doctoral research scholar at Columbia Business School, says that it was the “search for radical innovation and endless reinvention.”

Adrià, of course, plays a leading role in the book. A culinary autodidact who started as a dishwasher, he began working at elBulli, a one-star Michelin restaurant serving French nouvelle cuisine, as a temporary intern in 1983. By 1990, when elBulli, then serving a locally inspired Mediterranean menu, earned its second Michelin star, he was its co-owner.

“We could have kept doing the Mediterranean style forever.… But we didn’t. I don’t really know why,” Adrià tells Opazo. Then, after a pause, “Well…we got bored. That’s why.”

That’s a nice bit of understatement. Actually, Adrià became obsessed with the pursuit of culinary innovation. He eliminated elBulli’s à la carte menu — if you were lucky enough to eat there, you ate a tasting menu created from scratch during the six months it was closed. During the downtime, he sent his staff around the world to search out inspiration. In 2002, Adrià didn’t open elBulli at all. Instead, he directed the staff to codify the restaurant’s intellectual capital in order to revitalize the ongoing effort to invent new techniques, tools, and concepts, such as the foams, frozen airs, and spherifications that have become basic elements in the deconstructed dishes of molecular gastronomy.

While all this was going on, elBulli’s reputation was growing apace. It earned its third Michelin star in 1997. Between 2002 and 2009, Restaurant magazine named it the best restaurant in the world five times. In an unprecedented move, Adrià also began sharing his methods and recipes with the rest of the culinary community — building an influential platform of the sort that Silicon Valley unicorns seek. Then, in 2011, the chef announced that elBulli would close permanently. It would be replaced by the elBulli Foundation, a nonprofit dedicated to the exploration of innovation in its own right.

As tasty as elBulli’s fantastical creations must have been — frozen parmesan foam and rose-scented mozzarella and melon caviar, oh my — the lessons in innovation that the restaurant offered were what attracted the attention of large companies, business schools, and, eventually, Opazo herself. Those lessons are the subject of Appetite for Innovation, an ethnographic study in which the insider’s view of an intriguing subject more than makes up for the inherent clunkiness and redundancy of the academic presentation.

Opazo examines elBulli with a sharp sociological eye, creating a detailed case study in what she calls the “production of innovation.” She makes clear the essential role of leadership in the restaurant’s success. As you might expect, Adrià’s vision and charisma — in combination with a chef’s power in the kitchen — are fundamental drivers in the elBulli story. But Adrià doesn’t simply issue dictates. He creates a culture of innovation, with a language and supporting documentation, that unites his staff in pursuit of his interest in “not copying,” but extending the culinary repertoire.

Adrià became so obsessed with exploration that he eventually shut down the exploitation altogether.

Opazo also explores the inner workings of elBulli and its outreach efforts, explaining the interlocking roles they play in the quest for continuous innovation. But perhaps the most valuable lesson in the book is, as the author unblinkingly points out, “the unintended consequences of the relentless production of innovation, its connection to the closure of the elBulli restaurant, and the need for the organization’s reinvention.”

That latter bit is the sticking point for executives who hope to emulate Adrià. In the early 1990s, while the chef was beginning his rise, Stanford Graduate School of Business professor James G. March was exploring the need for companies to balance “the exploration of new possibilities and the exploitation of old certainties” (pdf). Adrià, however, was so obsessed with the exploration that he eventually shut down the exploitation altogether — launching a nonprofit innovation lab. No corporate leader can afford to follow his example that far.