At the annual World Economic Forum (WEF) in Davos this week, approximately 2,500 politicians, business leaders, and assorted experts are considering many of the issues raised by five sociologists in Does Capitalism Have a Future? (Oxford University Press, 2013). It’s likely that the WEF attendees will end up in a place similar to the sociologists—with a general consensus that the global economy is facing huge challenges, conflicting views about their causes and consequences, and only speculative guesses about possible solutions.

Leading the batting order of solo essays (which are sandwiched between an introduction and conclusion written by the entire author team), Yale senior research scientist and former International Sociological Association president Immanuel Wallerstein asserts that capitalism is approaching a “structural crisis much bigger than the recent Great Recession.” This crisis, he says, will come from a profit squeeze caused by an inexorable rise in the prices of labor and raw materials, and tax rates, combined with political instability. Randall Collins, a professor at the University of Pennsylvania, thinks that the primary driving force behind this instability will be the gutting of the middle class as up to two-thirds of the jobs that support it disappear. 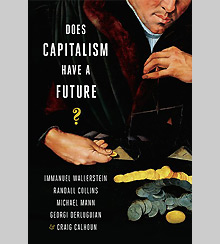 UCLA professor Michael Mann takes issue with these scenarios of capitalism’s demise, but crafts his own bleak predictions. The first is a systemic collapse brought on by nuclear war, which he argues is the ultimate black swan; the second is a collapse caused by an ecological crisis, which he says is “highly predictable—unless extraordinary evasive action is taken.” Unfortunately, reining in the latter crisis will require that capitalism be radically reformed, in addition to large scale and collective reforms on the part of nations and individuals. None of which, Mann concludes, appear likely at this time.

Georgi Derluguian, who teaches at New York University Abu Dhabi, accepts the idea that the end of capitalism is nigh and tries to suss out what that might look like by examining the collapse of communism—or more accurately, its transformation into corporate oligarchy in Russia and state capitalism in China. He sees the distinct possibility of “mass civic uprisings” like those that occurred during the collapse of the Soviet bloc, but he doesn’t predict class warfare. Rather, he suggests that whatever system replaces capitalism, it will be a meet-the-new-boss-same-as-the-old-boss situation.

Readers of Does Capitalism Have a Future? have to wait for the final solo essay, by London School of Economics and Political Science director Craig Calhoun, for a more optimistic view. Calhoun doesn’t think that capitalism has run its course and he argues that it can weather the intensifying storm as a political system by reshaping its economic tenets. He admits that capitalism faces threats, but he thinks it is more likely that it will evolve into something more akin to China’s state capitalism, rather than simply disappear. So, this is not a business-as-usual scenario either.

If the sociologists are right, this is an optimal time for global business leaders to be considering the “profound political, economic, social and, above all, technological forces [that] are transforming our lives, communities and institutions.” But of course, that presumes they’re actually doing what the WEF’s executive summary for this year’s meeting in Davos says they’re doing.