Labels make for interesting reading in the era of globalization. For US$1, I can buy a pound of apples from New Zealand or a pair of gym socks made in Honduras. How can goods like these be shipped thousands of miles and still be sold for a profit in my hometown of Williamsburg, Va.? Rose George’s new book, Ninety Percent of Everything: Inside Shipping, the Invisible Industry That Puts Clothes on Your Back, Gas in Your Car, and Food on Your Plate (Metropolitan Books, 2013), offers part of the answer: container ships, like the Maersk Kendal. 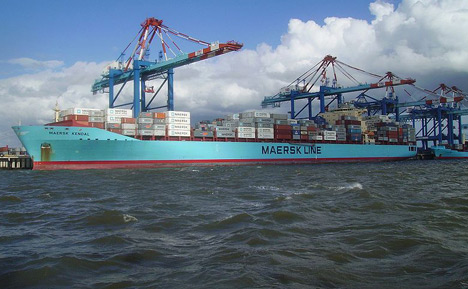 George shipped out on the Kendal for 39 days—“six ports, two oceans, five seas”—as part of her research, much like John McPhee did for his book on the U.S. Merchant Marine, Looking for a Ship (Farrar, Straus and Giroux, 1990). Four stories high and three football fields long, the “midsized” Kendal holds 6,188 20-foot containers. Its owner, A.P. Møller-Maersk A/S, a Danish company with $60 billion in annual revenues, is currently financing the construction of a fleet of 20 “Triple-E” ships that are a third longer than the Kendal and hold three times as many containers—reducing the cost of shipping a container by 20 to 30 percent. Three Triple-Es are already in service. They are too big to enter any port in the U.S. or pass through the Panama Canal. Instead, they travel between Europe and Asia via the Suez Canal.

But ships alone, not matter how big, are not enough to supply us with apples, socks, and myriad other goods from around the world. Cost-effective cargo transportation also requires a highly efficient shipping process. The key element in this process, explains George, is the standardized steel shipping container or box, which enables loading and unloading in less than a day, optimal use of space, and minimal handling. (See Marc Levinson’s terrific The Box: How the Shipping Container Made the World Smaller and the World Economy Bigger, reviewed here). There are more than 20 million boxes in service, according to George. As a result, shipping by sea is “so cheap that it makes more financial sense for Scottish cod to be sent ten thousand miles to China to be filleted, then sent back to Scottish shops and restaurants, than to pay Scottish filleters.”

For those wondering if the environmental costs of such shipping is properly factored into its price, George reports that it is the “greenest of mass transport.” Ocean-going transport emits only a tenth of the CO2 per ton per mile of a truck and a hundredth of that of air freight. But, given of size of the industry, that still adds up to “a billion tons of carbon a year and nearly 4 percent of greenhouse gases.”

Rose George’s voyage on the Kendal turns out to be humdrum as a mode of adventure travel. She spends days below decks in bad weather; the captain himself does not venture on deck for more than a month. Nevertheless, Ninety Percent of Everything is filled with excursions that make for good reading.