Big box retailers are getting smaller. Some are being compelled to do so by the market: Circuit City and Sports Authority liquidated. Others are shutting down less-trafficked locations. And some are doing so by design. Literally.

Take Target. In 2014, it launched a beta version of a smaller store with far fewer offerings in its hometown of Minneapolis. As significant as the new format is the fact that when these stores began to roll out elsewhere, they shifted the retailer’s geographic and product focus away from the traditional suburbs and toward cities and college towns.

In an age of e-commerce and muted spending, Target, like many retailers across the U.S., is trying find a way to reverse declining foot traffic and revenue. U.S. retailers saw low sales growth in 2015, the slowest since a 2009 decline, and so far overall retail sales are up only 2.9 percent in 2016 (pdf). This, despite falling gas prices and an improving economy and jobs market, which, theoretically, should spur higher spending. Indeed, Target reported a drop in same-store-sales, a closely watched gauge of retailer performance, in its third quarter and lowered earnings expectations for the full year.

While Target is taking some of the usual steps such as cutting prices and bringing in new executives, the company is notably doubling down on mini-Targets. The plan is for the upscale downscale retailer to continue to roll out small shops in college towns and urban centers, which feature what it calls “curated” products (read: a lot less shelf space means room for only stuff that appeals to millennials, such as dorm-room and apartment-sized home goods and fast fashion). For example this fall, Target opened a mini store in State College, Pa., with pantry items geared toward how students eat and Penn State merchandise, and another in Cupertino, Calif., featuring fresh grab-and-go food choices for commuters’ lunches and tech gear. 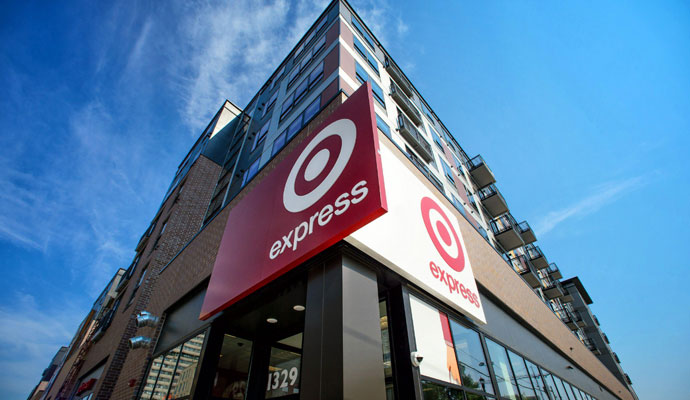 Target’s large stores, which carry a huge range of goods and groceries, can be about 175,000 square feet. But the smaller stores are a fraction of that size, at around 20,000 to 50,000 square feet. Fewer square feet means fewer employees to pay, lower rents, smaller energy bills, all while still selling goods at the same cost as in its traditional big boxes and instilling brand loyalty in the next generation of consumers.

An old newsroom adage holds that when something happens three times it’s a trend. And there is definitely a trend of really big retailers going small.

As we’ve noted, Whole Foods is opening a chain of lower-priced natural-foods stores in hopes of luring price-conscious and millennial customers who may be tempted to trade down. The company’s 365 by Whole Foods stores are going into hip neighborhoods like Los Angeles’s Silver Lake as well as affluent suburbs such as Lake Oswego, Ore., outside of Portland.

Much like the new Target stores, the 365 markets differ significantly from the typical Whole Foods superstore. They have a smaller layout, employ fewer people, use more technology, and stock a smaller selection. But they offer lower prices. And the problem with that is Whole Foods risks 365 cannibalizing sales from the mother ship.

Target, like many retailers across the U.S., is trying to find a way to reverse declining foot traffic and revenue.

Whole Foods is willing to take this risk because, aside from the goal of customer retention, it hopes it can test out new ideas in the 365 stores that will benefit the small stores and be instructive to the entire chain. The jury is still out on how successful the venture will be in the long-term.

Walmart’s Express stores, which got off the ground in 2011, stand as another example of big box miniaturization — but a negative one. Walmart stuck its smaller stores in locations that were already well served by its superstores, leaving them wide open to cannibalization. Indeed, the retail giant closed all 102 of its Express stores earlier this year, choosing to refocus on its supercenters and online sales.

Target is looking to avoid these pitfalls. It is planting mini-Targets in densely populated areas that are not necessarily served by a larger Target. And rather than going down-market or discounting, it is using these stores as an opportunity to customize its offerings to specific locations. If this strategy works, the company stands to reap all of the benefits that smaller, experimental stores have to offer (pulling in customers from competitors, testing new and innovative ideas, lower overhead) with less of the risk (cannibalization).

As baby boomers and gen Xers get in the habit of making everyday purchases from a smartphone instead of wandering through the aisles of big box stores, and as younger consumers who have never known a time when a couple of clicks couldn’t get all manner of goods delivered to their doorstep in a matter of days, or even hours, enter the marketplace, it’s clear that traditional retailers will have to get creative. Those who want to thrive not only have to figure out how to make the brick-and-mortar shopping experience convenient and at the same price point as online competitors, a challenge in and of itself, but also need to provide an experience that lures shoppers out from behind a screen. Mini versions of big boxes that cater to a specific neighborhood’s tastes and shopping needs appear to be a step in that direction. But whether they are the answer to that difficult puzzle remains to be seen.