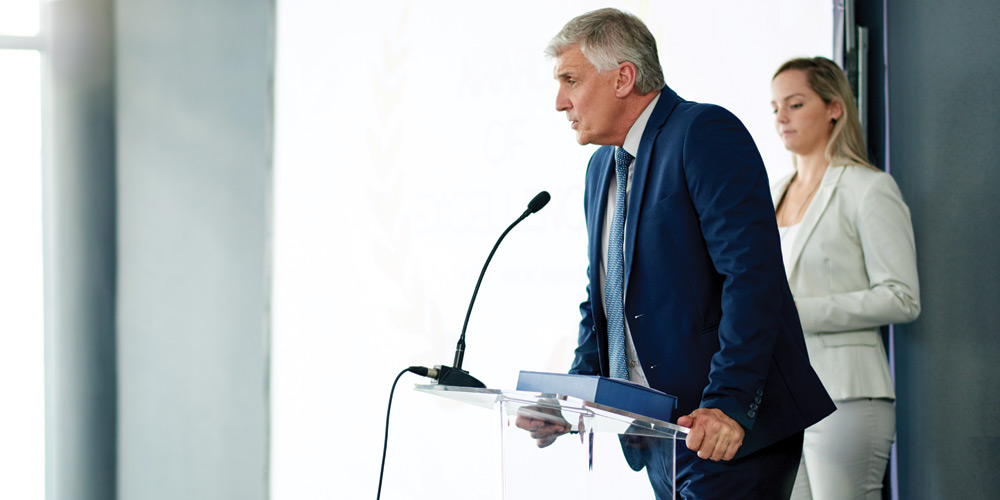 I have studied crises for more than a decade and worked with senior executives for far longer than that. After a while, patterns emerge. There are consistent threads woven between product failures, natural disasters, terror attacks, cyber-breaches, and the other calamities that beset organizations. Among the most interesting to me are the emotionally flat public statements coming from people at the top. Executive after executive comes across as uncaring, disconnected, or otherwise out of touch in their “you’re it” moment. They fail to bridge the empathy gap between the top of the organization and the public.

That failure to understand the thoughts and feelings of others has real consequences: Leslie Gaines-Ross, chief reputation strategist at the public relations firm Weber Shandwick, said that in research the firm has done, “85 percent of global consumers form reputational impressions about companies based on how companies react in times of crisis, thereby underscoring the importance of getting it right from the start.”

There is no shortage of crisis communications gaffes. And there’s also no shortage of qualified crisis communications professionals, but they are often seated at the far end of the table, separated from the boss by the general counsel and CFO. Though lawyers and finance people can offer valuable advice and should be part of the crisis response team, their training and roles incline them to play defense as they anticipate litigation and shareholder concerns. That’s part of their job. But when their defensive tendencies override a communication specialist’s recommendations, the company’s message can often be tone-deaf, at best, creating the impression of an empathy gap.

Empathetic leaders can draw on the skills honed through their preparation to build trust among their reports and with outside stakeholders.

In more than a decade of research, my colleagues and I have found that executives called to lead through crisis must carry out three core functions. One is to communicate effectively. (The others are being present and making appropriate decisions.) Shouldn’t CEOs — general managers at the apex of their organizations — have the communication skills to detect and correct these instances of incompassionate language? Shouldn’t they default to simple, clear, and sensitive messages or the advice of a communication specialist rather than the safe language of the legal and finance departments? I see four root causes of the executive empathy gap — and, fortunately, there are ways to solve each.

1. Problem: Too much alpha. The men and women who get the corner office do so after winning an intense competition, which often starts when they’re vying to get into elite business schools. They are rewarded for individual achievement, not compassion and empathy. And business education is largely framed by an economic logic that posits self-interest as the principal behavioral driver in people. By contrast, scientists have shown that, outside of the b-schools, empathy and altruism have been essential to the evolutionary success of humans and other social species. Perhaps, that is, until it is trained out of us.

Solution: Remember to be human. In 2008, Canadian food processor Maple Leaf Foods faced a crisis when its products were tainted with listeria. Twenty-three people died and 57 others became seriously ill. CEO Michael McCain took responsibility and issued a highly empathic statement, which included the following: “To those people who are ill, and to the families who have lost loved ones, I offer my deepest and sincerest sympathies. Words cannot begin to express our sadness for their pain.” The statement was followed by quick, substantive action, including sanitizing the plant and widening the recall to extend to products not thought to be contaminated.

In subsequent interviews, McCain said, “Going through the crisis, there are two advisers I’ve paid no attention to. The first are the lawyers, and the second are the accountants. It’s not about money or legal liability; this is about our being accountable for providing consumers with safe food.”

2. Problem: Gender imbalance. Research cited by primatologist Frans de Waal in his book Mama’s Last Hug indicates that women, on average, are biologically more empathetic than men. It’s a pan-mammalian trait linked to the necessity of nurturing offspring. A study published by the University of Cambridge in 2018 — the largest-ever examination of differences between the sexes — showed similar results. However, as has been amply documented, men dominate C-suite roles — only 33 Fortune 500 CEOs are women, about 7 percent — so there is likely an empathy deficit in the executive suite.

Solution: Diversify your team. The antidote to having too many men is to hire and develop more women. Research on the benefits of gender diversity has for some time indicated that not only will you have a more emotionally competent team, one that’s perhaps better equipped to communicate effectively and with empathy in crises, but you’ll have a higher performing one, too. As a start, companies should provide support, mentoring, and training to women and coach managers about implicit bias. Other steps to improve executive diversity — and by extension effectiveness — include cultivating a pipeline of women in middle and senior management, creating a culture receptive to women leaders, developing creative solutions to structural issues that hold women back, and moving more women into general management and P&L roles.

3. Problem: The CEO bubble. CEOs of large companies often exist in a rarified environment, where the information they receive is heavily filtered. They have people to handle things for them. They work long days that are tightly scheduled, during which most of their time is spent with other professionals discussing company concerns. This squeezes the time available for everyday empathy-building activities such as spending time with family and neighbors, hearing from frontline workers and regular customers, and chatting with the sandwich slinger at the deli. Thus, even once empathic CEOs may find their skills have withered.

Solution: Handle your handlers. Support personnel often derive status and power by controlling access to their luminary boss. However, there is a line between efficient operations and suffocating isolation. Ensure you spend time with people outside of the executive suite. When I first met Michael Eskew, then CEO of UPS, he invited my colleague and me to lunch — not in the executive dining room (there isn’t one) or a high-end restaurant. We dined in the company cafeteria where Eskew mingled easily with the rank and file.

4. Problem: Overreliance on written statements. No matter the crisis, a written statement of apology from the CEO invariably emerges (though often too slowly and after too much wordsmithing). However, most emotional communication is nonverbal. People judge authenticity and concern for others by reading facial expressions and body language. They need to see that the person in charge cares.

Solution: Get trained to be seen. CEOs who aren’t naturally personable in crowds (and even those who are) should undergo media training. At a minimum, top executives should be prepared to release a video statement after an adverse incident. Better yet, they should be able to appear in person and speak without notes. Among the best examples of this that I have seen is Southwest Airlines CEO Gary Kelly’s video response after a passenger was killed by an engine part on one of the company’s flights. He was direct, sincere, and empathic. The personal presence of AirAsia CEO Tony Fernandes at a crash in 2014 is another exemplar of effective, authentic communication.

Getting ready to face the adversity of your worst day — by learning to build and communicate empathy — generates dividends in your daily relationships and work. Empathetic leaders can draw on the skills honed through their preparation to build trust among their reports and with outside stakeholders. In fact, in one study, empathy was the strongest predictor of ethical leadership.

To bridge the empathy gap, leaders must get in touch with their humanity and step out of their executive bubble, and companies must work toward putting more women in the C-suite. Top executives must also undergo media training so that speaking with the public — even off the cuff — feels natural. Then, should a crisis hit, the person at the helm will be well qualified to reach out to the public with genuine empathy.