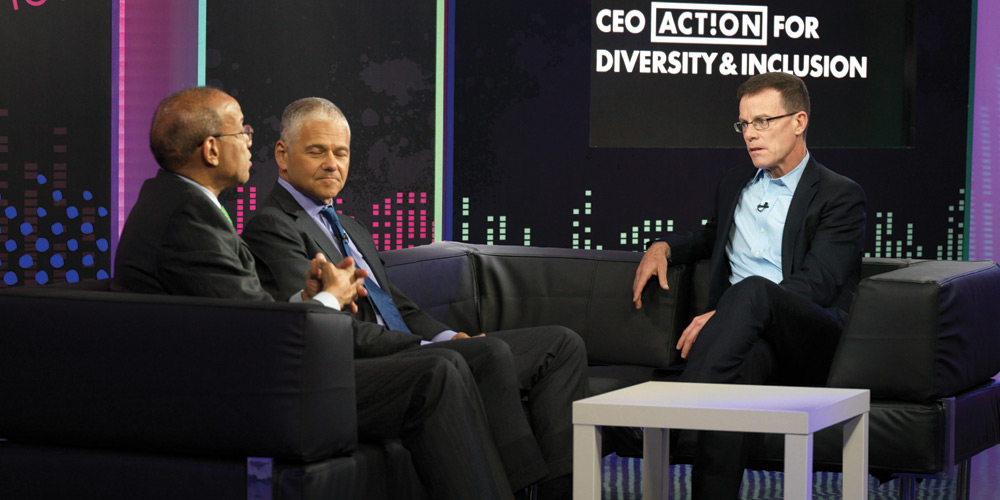 This interview is part of the Inside the Mind of the CEO series, which explores a wide range of critical decisions faced by chief executives around the world.

In 2017, when we launched CEO Action for Diversity & Inclusion with 150 companies, our goal was to rally the business community to take measurable action: to cultivate our workplaces as environments where diverse experiences and perspectives were welcomed and where employees would feel comfortable and encouraged to discuss diversity and inclusion.

One key element of the initiative is the CEO Pledge that business leaders sign upon joining. The pledge’s initial three core elements were to hold difficult conversations about diversity and inclusion; to educate people about unconscious bias; and to share best — and unsuccessful — practices.

This year, we added a fourth element to the pledge: To engage with the board of directors. Specifically, this means committing to a diversity and inclusion–related strategic plan that will be prepared by management and reviewed with the board.

Now, the coalition has more than 750 business or nonprofit organization signatories, representing more than 15 million workers in the United States. There is a core group of more than 2,000 C-suite executives — CEOs, CHROs, and CDOs — who are working together to share practices for conducting the difficult, uncomfortable, and courageous conversations that lead to substantive change in the workplace. They see diversity and inclusion not just as talent issues or sources of competitive advantage, but as an opportunity to influence society.

There is still a long way to go. In the United States today, black Americans make up 14 percent of the workforce — but less than half of 1 percent of the nation's CEO population. The gender pay gap still exists; women on average have to work 62 days more than men in similar jobs to earn the same pay. For minorities, that gap is even bigger. Mental illness affects one in five workers, highlighting the tremendous need we have to support employees who are part of that group. And although some may say we’ve made progress regarding women’s inclusion in the workforce, only 33 of the Fortune 500 CEOs are women, about 7 percent. The more we focus on driving inclusive workplaces, the more those numbers will improve.

In this conversation, two chief executives and I discuss the personal commitment that a senior leader must make to diversity and inclusion, and how that commitment translates into action. The dialogue was adapted from an onstage discussion at CEO Action’s meeting (an event for signatories and members) on June 12, 2019.

TIM RYAN (PwC, CEO Action steering committee chair): As companies get involved in transformation efforts, what’s the role of diversity and inclusion?
Efraim Grinberg (Movado): For us, it’s particularly important. Our company is in the fashion wristwatch business. We have to understand numerous different cultures and ethnicities to be successful with all of our brands. In addition, we operate with a global workforce. A quarter of our employees live in Asia, a quarter in different countries in Europe, and 50 percent in North America. To get the best ideas, and to be the most successful, we really have to have a diverse workforce.

RYAN: What do you think “diversity and inclusion” will look like three years from now?
JOHN ROGERS (Ariel): I’m hopeful that things will continue to get better. More business leaders and elected officials are pushing for diversity and inclusion. Civil rights organizations are coming together more, and women’s organizations are having an impact. I think we need to move the activity from the big Fortune 500 companies to the next tier. Small and medium-sized companies are not as diverse as their larger brethren, and in the private equity world, where so many companies are being launched, it’s even worse. So, we’ve got a lot of work to do.

RYAN: When you think about the progress we’ve had versus where we need to go, what worries you?
GRINBERG: When I was first invited to join CEO Action, immigration was just becoming a topic of serious conversation in the United States. My family were immigrants; I was born in Cuba and came here when I was 2 years old. So I understand the value of this country to immigrants, and the power of what immigrants can do in the workforce. To me, it is important to keep this country as a place that continues to attract talent from all over the world, and to include immigrants among the leaders of this country.

We need to move diversity and inclusion activity from the big companies to the next tier. Small and medium-sized companies are not as diverse as their larger brethren, and in private equity, it’s even worse.”

ROGERS: It worries me that the minority business community has struggled in the past few years. In Chicago, we had so many extraordinary businesses: Johnson Publishing with Ebony and Jet, and Johnson Products with Afro Sheen and Ultra Sheen. We had the largest black-owned banks in the country, and large black-owned insurance companies. They’re almost all gone.

You might say, “Why does that matter?” First, many of the executives and employees in those companies ultimately ended up becoming leaders in larger majority-oriented companies. If we don’t have a strong, vibrant minority-owned business community, the pipeline of talent that a lot of companies look for won’t be there. At Ariel, several of our former executives are now partners at the largest investment banks in Chicago; if we didn’t exist, there’d be less diversity on LaSalle Street.

RYAN: John, you mentioned that elected policymakers are getting involved in this issue. We’ve seen this at the federal level and state level. Companies headquartered in California, for example, now have to have at least one woman on the board. In Illinois, there is new legislation requiring publicly held companies to [publish] data on the diversity of their boards. What do you think of legislative mandates?
ROGERS: The mandate in Illinois will be very helpful; exposure in and of itself will make a difference. Companies that are not diverse will feel a lot of pressure to do the right thing. In 2013, Black Enterprise magazine began to expose the diversity data for corporate boards in Silicon Valley. It was horrible. Reverend Jesse Jackson took that data and started showing up at annual meetings there, and all of a sudden, those giant companies had diversity on their boards for the first time.

RYAN: What are some of the challenges you’ve faced as a CEO in driving to be a more inclusive workplace?
GRINBERG: We’re a small, suburban company in New Jersey. We have a lot of women in our headquarters, but we may not have as many people of color there as we have in other regions. The challenge has to do with where we are located and our ability to recruit in some geographies. Another challenge is to keep the discussion top of mind.

ROGERS: Getting people out of their comfort zone is the biggest challenge. Employees will hire someone that they know from a prior job, or someone they grew up with. They sometimes forget that they’re supposed to be searching for diverse talent. It’s the same when you remind them to look for minority suppliers and professional-services firms. They’ll call the same law firm, investment bank, or advertising agency they’ve always called, and forget that there are diverse firms out there that may deserve the opportunity. Or they won’t push their majority suppliers to have minority leaders on the team serving them. You have to remind people [by asking if they can] think of diversity in every decision they make, and it’s sometimes a little uncomfortable to have to ask that question. But it’s the right question to ask.

RYAN: John, you’ve been engaging your board for years around diversity and inclusion. Why is that so important?
ROGERS: We have been working with an extraordinary diverse board at Ariel. The board members can hopefully take some of the lessons they’re learning at Ariel back to their home base and spread the word.

Having the board engaged creates an opportunity for me to have more candid conversations with others around these issues. If you don’t have the right kind of organizational support for these conversations, they end up being awkward and stilted; they don’t happen enough; or they don’t get the follow-through that’s necessary.

RYAN: You are on a number of corporate boards. Do you see boards getting engaged differently on this topic?
ROGERS: Every board is different. I’ve been lucky to be involved with the New York Times Company, Nike, McDonald’s, and Exelon. Every one of those companies has been focused on having a more diverse workforce and board, and those conversations are ongoing. Some companies like McDonald’s, with the leadership of a chair like Andy McKenna, have a long history of fostering diversity among their franchisees and strongest suppliers.

If we can create an environment in our workplaces — and in our country — where everyone has an equal and fair shot at success, the sky’s the limit. And for us, I can’t think of a better legacy as a group of CEOs and leaders than creating a world where everyone has a fair shot to achieve their full potential.