On December 3, 1989, during the summit meeting that marked the end of the Cold War, Sergei Akhromeyev—a marshal of the Soviet Union and Mikhail Gorbachev’s personal military advisor—told George H. W. Bush, “We have read every one of your submarine messages for ten years and have been unable to find or kill even one of them. We quit.” 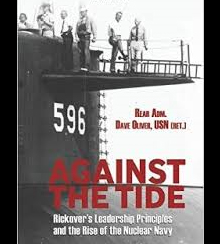 Akhromeyev was talking about the U.S Navy’s fleet of nuclear submarines, which, starting with the 1954 launching of the Nautilus, undermined the U.S.S.R’s assured second-strike capabilities and tilted Cold War geopolitics in the favor of the United States. “Shrouded in secrecy, Nautilus’ successors could penetrate any and all underwater defenses the Soviets could develop,” explains retired rear admiral and defense company executive Dave Oliver in Against the Tide: Rickover’s Leadership Principles and the Rise of the Nuclear Navy (Naval Institute Press, 2014). “American submarines became so technically advanced that they were essentially invulnerable.”

The prime mover behind the construction of this fleet is four-star admiral Hyman G. Rickover, the unlikely leader of a long-shot endeavor that dates back to the dawn of the nuclear era. “In addition to trying to simultaneously invent and adapt a new technology to an otherwise unvalued naval vessel,” Oliver (who spent much of his career serving under the admiral) writes, “Rickover was personally not terribly charming, needed lots of money, had 98 percent of the Navy arrayed against him, was proposing shattering the cookie jars of many other admirals, and was seen as downright disrespectful of the submarine heroes who had just won the first global war.”

So how did Rickover pull it off?

One thing he did was to manage up—way up. By 1947, the Soviet occupation of Eastern Europe and the U.S. policy of containment were creating what George Orwell had been characterizing as “cold war,” the U.S. economy had not yet entered the long postwar boom, and the wondrous potential of nuclear power was still being lauded. Rickover danced to these tunes. He pitched the nuclear navy to the Eisenhower administration and the U.S. Congress as a low-cost, high-tech alternative to a conventional navy. He built the Nautilus from used parts—bringing in the first nuclear sub for less than US$70 million. Thus, he bypassed the military hierarchy.

Rickover also understood and respected the power of culture—in this case, the heavily entrenched culture of the U.S. Navy. To drive innovation and establish new ways of working, he tried to avoid building his subs in Navy shipyards. (He preferred to use privately owned yards, where he did not have to buck the entrenched hierarchy.) And he refused to use most of the officers already serving in diesel subs because he wanted to start with a clean slate.

Finally, Rickover was unrelenting in his drive to marry safe, consistent processes with continuous improvements. This, explains Oliver, gave him a leg up on the task of transforming a powerful and unproven technology into a dependable source of military advantage. To be sure, submarining has always been a dangerous business, and nuclear subs are no exception: the Navy lost two of them—the Thresher and the Scorpion—and their entire crews in the 1960s. But the nuclear navy has never had a reactor accident.

Rickover was unrelenting in his drive to marry consistent processes with continuous improvements.

Oliver has a weakness for hyperbole, illustrated by statements like this one: “It’s impossible to overstate the massive resistance Rickover encountered when he promoted nuclear power.” But despite his obvious admiration for Rickover’s abilities and achievements, he does not shirk reality in Against the Tide. “Even with his exceptional management and personal work habits,” Oliver tells us, in a final lesson that leaders everywhere might heed, “Rickover would have failed if history had not been on his side.” As always, timing plays an essential role in success.