In early March, the Wall Street Journal reported that a vital U.S. industry, trucking, is having difficulty hiring and retaining drivers. In 2015, according to the American Trucking Association, there was a shortage of 50,000 drivers. The turnover rate for drivers at large trucking companies stands at a crippling 81 percent.

Nearly eight years into the U.S. economic expansion, and with 78 straight months of jobs growth, it is getting harder for employers to fill open positions of all kinds. There were 5.5 million job openings in the U.S. at the end of January. But the macroeconomic climate poses a particular challenge to trucking companies.

As trade, consumption, and manufacturing continue to grow, there is more demand for trucking’s services. When a product, package, or pallet goes from Point A to Point B in this country, it has to get on a truck. Disruptive technology can’t help — at least, not yet. Drones are being tested only for very small deliveries. And for all the hope, hype, and fanfare about autonomous vehicles, the prospects of large fleets of self-driven semis roaming the nation’s highways seem far in the distance. 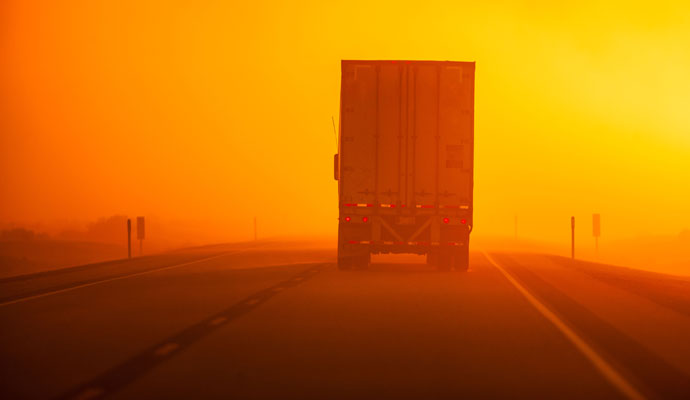 That means that the only option for the trucking industry is to make it more attractive for real human beings to sit behind the wheel. That is tougher than you might think, in part because of the nature of the job, which employers can’t do much about. Driving a truck is clearly not for everybody. You have to sit behind the wheel of a large vehicle, often in traffic, for many hours of the day. Schedules can be unforgiving. Long-haul truckers have to be away from home for long stretches. It’s lonely.

But the problem may also stem from the way employers structure the employment relationship they have with truckers, which is something they can do a lot about. As the Journal reported, Steve Viscelli, a sociologist at the University of Pennsylvania who drove a truck while gathering material for his book The Big Rig: Trucking and the Decline of the American Dream (University of California Press, 2016), blames trucking’s inability to staff up properly on “an industry labor model that relies heavily on inexperienced drivers and independent contractors.”

Viscelli found two significant issues. One is that trucking companies want drivers to be independent contractors. You can understand why. Such an arrangement offers the company greater flexibility, cuts down on overhead and benefits costs, and makes the whole organization more agile. And trucking companies might reasonably think that this would be appealing to workers. In recent years, the combination of a slack labor market and the rise of new technology-fueled platforms that match demand and supply of labor for short-term stints for drivers, cleaners, programmers, and other service providers have led to the rise of the gig economy. The changing structure of the workplace has opened opportunities for people who wish to control their schedules, be their own bosses, and not be tied down. According to one study, last year some 40 million Americans were self-employed, most of them by choice (pdf).

But I think, as a society and as analysts, we overlook how many people prefer the stability and other emotional benefits that a gig economy can’t provide. Not everybody wants to own their own business, be their own brand, or work as an independent contractor. More people than we think may prefer the stability of a biweekly paycheck that comes with benefits, colleagues, and a central office.

As for those who are full-fledged employees, it’s not clear that trucking companies are doing enough to make the positions compelling.

What’s more, if you’re going to base your business model around independent contractors — especially independent contractors who increasingly have more choices — you have to structure the deal so that it makes sense for them. And in trucking, Viscelli found, the companies often don’t. Many independent truckers lease or buy vehicles from the companies on unfavorable terms. As the Journal noted, they “owe so much that they may end up working 70 or 80 hours a week just to pay back what they owe and cover expenses such as fuel and insurance.”

As for those who are full-fledged employees, it’s not clear that trucking companies are doing enough to make the positions compelling. “In 2015, heavy and tractor-trailer truck drivers earned a median wage of [US]$40,260, according to the Bureau of Labor Statistics,” the Journal notes. That’s not bad, but it’s not great for jobs with tough working conditions. Viscelli found that when he drove a truck, rather than being paid a salary or an hourly wage, he was paid for the miles he managed to drive — “not time waiting to load and unload [the] rigs or sitting in traffic.”

It may seem simplistic and crude to note that there is an easy solution to worker shortages: Make the jobs more appealing than others available by paying more and offering more benefits. But there’s a deeper dynamic at work here. As informal, independent, and self-employed work continues to grow, we should recognize its appeal while acknowledging its downsides. If you are trying to fill lots of open positions, it may be more constructive to have as a baseline assumption that the median job candidate would prefer to have job security, tenure, insurance, healthcare, a pension, and some reward for loyalty.

Lots of the people who we think may be content to work at gigs actually may want jobs.