Much has been written about China’s supersized demand for natural resources—oil and gas, metallic ores, and agricultural commodities—and the effects it could have on the global economy, politics, and the environment. Often these prognostications are suspect: It’s only natural to wonder whether self-interest is skewing a metal trader’s prediction that Chinese demand will drive copper’s price to stratospheric levels or a lobbyist’s prediction that a Chinese company’s acquisition of a U.S. oil company threatens national security. 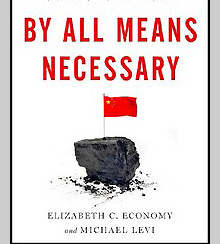 That’s why I was quite interested in By All Means Necessary: How China’s Resource Quest is Changing the World (Oxford University Press, 2014), a new book written by Elizabeth C. Economy and Michael Levi, senior fellows at the Council on Foreign Relations (CFR). Economy is an expert on China and author of the seminal book on that nation’s environmental challenges. Levi is an expert in global politics and energy economics. They make for an authoritative team.

The faintly ominous ring of their book’s title notwithstanding, Economy and Levi are dispassionate and evenhanded. Contrary to many experts, they find that, by and large, China is not trying to secure the resources it needs by buying up ore deposits and oil fields—actions that could lead to a stranglehold on vital material. Instead, it is procuring natural resources mainly through trade. This has contributed to radical price increases and more competitive markets. But, according to the authors, further natural resource price shocks are unlikely because the markets have adjusted to Chinese demand.

In response to political fearmongering, Economy and Levi conclude that “the impact of China’s resource quest on international politics and security has been modest thus far.” They admit that China’s willingness to trade with nations like Iran has “helped blunt the impact of Western sanctions.” But they do not find that China has contributed to wars, like the one waged in the Sudan, where China’s state-owned oil company CNPC plays an instrumental role in extracting and refining oil and where 50 percent of the oil produced annually is exported to China.

The authors are less sanguine about the environmental effects of China’s resource needs, mainly because the same challenges that the nation faces domestically are present when it tries to obtain natural resources overseas. When Chinese companies seek to extract resources in nations with lax environmental regulation, a sort of double whammy can occur because neither party is policing the situation. There is a silver lining though: As Chinese companies interact with other more environmentally responsible multinationals, they are actually improving their practices—either because they’re feeling international pressure to do so, or because they’ve found that being responsible can also be profitable. And with corporate responsibility on the state agenda in China, the authors also expect to see better practices in the overseas ventures of Chinese firms.

As Chinese firms interact with more responsible multinationals, they are improving their practices.

The authors of By All Means Necessary also analyze the winners and losers among the main players affected by China’s quest for resources. Resource consumers who must buy in the marketplace will pay more, but the owners of those resources will profit from higher demand. Overseas investors have a major new competitor with which to contend and will need to avoid a “race to the bottom.” Governments, especially the U.S. government, will need to factor China’s resource needs into their actions to maintain their own stockpiles and to avoid igniting resource wars. National security is a two-way street.

None of these conclusions sound particularly dire, especially when you consider that China is simply assuming its place among the rest of world’s most resource-hungry nations. And if you dip back into history and examine the behavior of other nations in their quest for natural resources, such as Belgium in the Congo in the late 1800s and the U.S. and the U.K. in Iran in the 1950s, China looks like a shining exemplar…so far.