One of the defining characteristics of tech and media companies is coming under fire: the provision of free food, drinks, and snacks.

Faced with rocky public markets, some venture-backed technology companies are dialing back on the amenities they provide employees, including free lunches and dinner. Shareholder activists also look to in-house cafeterias as a potential way to trim fat. Eric Jackson, an investor who has been critical of Yahoo, charged that the company is spending US$450 million annually on employee food. CEO Marissa Mayer has countered that the total was more like $150 million. 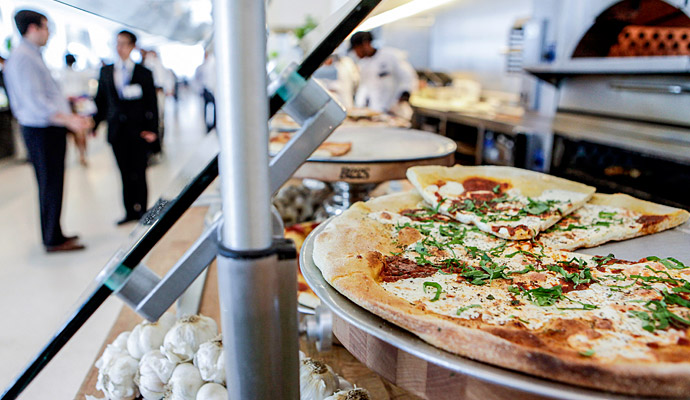 To a degree, analysts and critics see the provision of quinoa salads, cappuccinos, fruit bowls, and pistachios as just another sign of once-hard-headed companies growing soft, coddling millennials by providing them with the comforts of home in the office.

But here’s the thing. Offering free meals and caffeine is actually a highly effective — and cost-effective — means of motivating and controlling young employees. And in most instances, companies realize significant returns on these investments.

Offering free meals and caffeine is actually a highly effective — and cost-effective — means of motivating and controlling young employees.

As I understand it, the phenomenon of providing young, college-educated, overworked employees with free meals started at investment banks and law firms in the 1980s and 1990s. The proposition: If you stayed at work past a certain hour, say, 7:00 p.m., you could order dinner into the offices on the company’s dime. (Stay even later, and you could take a car service home.) This was a transparent effort to encourage young people who were getting paid fixed (not hourly) salaries to stick around the office for an extra hour or two each day. Sure, a law firm may have paid out $25 for a young associate’s takeout dinner. But the firm was billing that associate’s time out at $200 per hour or more. So even if the offer of a free meal incentivized the associate to do an extra 10 minutes of billable work per day, the investment was worth it.

The practice spread in the 1990s to media and technology companies. At my first job in New York in the early 1990s, at a financial information and media company, the employer was famous for its spread: free snacks and coffee, cereal and fruit baskets, ramen noodles and soup, every type of soda and packaged salty snack you could imagine. Why? The company’s founder and CEO was a benevolent, paternalistic dictator type. But this was a scrappy, understaffed crew, working in an environment in which beating the competition by seconds mattered. He couldn’t afford to have people leaving their turrets every time they were hungry and thirsty. The investment in maintaining a free in-house convenience store was designed to discourage people from leaving the building for 15-minute coffee breaks and 30-minute lunch breaks.

The logic becomes even more compelling if your offices are in a suburban office park (as is the case for many technology companies in Silicon Valley) or in an up-and-coming part of the city that may lack consumer amenities (as is the case for many media and tech companies in New York and elsewhere). At another point in my career, I worked at IAC, in a beautiful, architecturally significant building — located on an otherwise desolate block of the far west side of Manhattan. Going to get coffee, or a bagel, or lunch required an excursion. And that 30 minutes could have been spent creating content, or coding, or selling ads.

At many workplaces, people don’t get paid by the hour, and don’t get overtime. So if you’re an employer, it’s in your interest to encourage people to stay at the office, and to be energized and caffeinated while there. If the provision of free food and drinks can save 30 minutes of time, five days a week, for 50 weeks a year, that adds up to 125 hours of downtime avoided, the equivalent of about three weeks of full-time work.

And the more you pay your employees, the more economic sense it makes to feed them on-site gratis. Consider an engineer in Silicon Valley, or on the far west side of Manhattan, with a salary of $150,000. Add in benefits and overhead, and the engineer costs the company $200,000 per year — whether she works 50 hours a week, or 54 hours a week. That comes to about $100 per hour. Now, if you can save that employee 30 minutes a day or encourage her to work 30 minutes longer by forestalling the need to stop for breakfast, or go out for a coffee break, or eat lunch at the desk instead of going out, or not stepping away for a 3:00 p.m. snack, or staying until 7:00 p.m. until dinner is served instead of going home at 6:30 — that’s worth $50 to you. Providing somebody with $25 of free food and drinks per day at a cafeteria is an investment that pays off double every single day.

Maybe there is such a thing as a free lunch after all.