As the technological revolution rolls on, innovators are running out of industries and areas to disrupt. Retail banking? Check. News and entertainment? Check. Shopping for clothes and groceries? Check. Driving? We’re getting there. Juicing? Well, maybe not so much.

In every instance, technology, software, robots, and machines are being deployed to displace human labor, or eliminate the need for it entirely. And now it is coming to an area few would have considered ripe for disruption: lunch.

From this consumer’s perspective, lunch is working pretty darn well and isn’t in need of reengineering. In fact, in Manhattan, and in many cities large and small, we’re in something of a golden age for lunch. The choices on offer are immense, tasty, and generally quite affordable. You’ve got your stand-by pizza, diners, delis, Chinese, sushi, and fast food. In recent years, we’ve added chains that specialize in sandwiches, burritos, quality hamburgers, made-to-order salads, banh mi, and even poke. Every week, a new food truck with a new specialty — schnitzel, halal kebabs, mofongo bowls, dumplings — rolls onto the scene. Lunch in Manhattan is a smorgasbord. And while the lunch options in midtown are still powered almost entirely by human labor, there are a plethora of options that are both cheap and highly efficient. The line at the Chipotle around the corner from my office is often 50 deep — but you get your food in about five minutes. 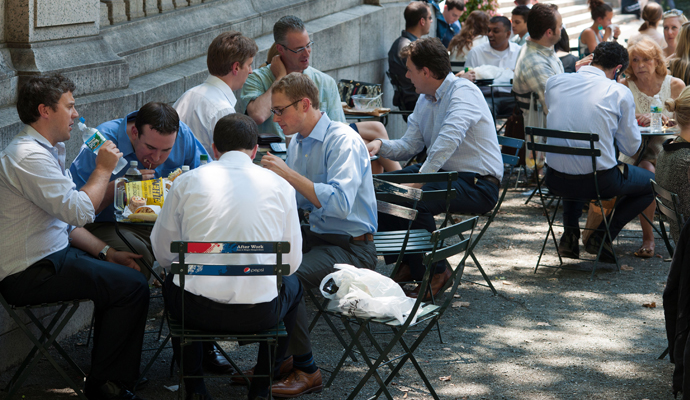 But lunch joints face a challenge. The minimum wage is rising in many cities, and the labor market is tight. So it’s hard to staff up operations at the comparatively low wages to which quick-service restaurant operators have become accustomed. According to the Bureau of Labor Statistics, there were 647,000 openings in the accommodations and food service sector at the end of March. And innovators can’t resist innovating.

Which is why I had lunch recently at Eatsa — a small but growing chain with outposts in (where else?) San Francisco, New York, and Washington, DC. Here’s how it works: You walk in, and, if you haven’t already placed your order via the web or a mobile app, swipe your credit card at one of the kiosks. You then choose one of about 10 quinoa-based meatless bowls (Hummus & Falafel, Cantina Kale Salad, Aloha Bowl), select from among the small number of extras, and pick a drink (no mainstream sodas). Instantly, your name appears on the illuminated board at the front of the shop and you can track your progress as the customers ahead of you in line pick up their meals.

In Manhattan, and in many cities large and small, we’re in something of a golden age for lunch.

Also at the front of the store, instead of a counter, is a wall with a couple dozen numbered cubbies. When your order is ready, one of the cubbies illuminates with your name in green. Tap the door twice, pick up your bowl, grab a fork and knife from the dispensers, and you’re on your way. The cost: $6.95 (sans extras, that is). Human interaction? Essentially none.

On the afternoon of my visit, a single “concierge” stood in the front of the thronged room, directing people to kiosks and fielding my questions. On a typical day, somewhere between 800 and 1,000 people come in, mostly at lunchtime. There are people behind the counter — the number is a trade secret. Because there’s comparatively little variation, and no cooking of meat, the turnaround from order to fulfillment is quick.

Of course, this model isn’t entirely new. In the 20th century, generations of diners thronged to the Horn & Hardart automats, which were essentially coin-operated cafeterias. But Eatsa, based in San Francisco and relying on touch screens, mobile payment systems, and newfangled ingredients, seems very much of this moment.

And on one level, it seems to work. Eatsa, unlike many of the giant fast food restaurants, isn’t a publicly held company. So we don’t have insights into its margins or sales, or whether this largely automated operation has a financial advantage over its more human-intensive peers. But the customers I talked to seemed enthusiastic and generally left satisfied.

Still, the experience left me a little cold. It’s hard to get too inspired by a restaurant concept that revolves around an unobjectionable but uninspiring grain like quinoa. The falafel was OK, but far below the quality of that on offer from one of a half-dozen places in a few-blocks vicinity. The larger problem is a lack of soul. Eating at Eatsa is a deeply impersonal experience. For some, especially those who regard eating as a necessary pit stop to fuel epic bouts of coding, that’s the point of applying technology to the food industry. Peopleless restaurants are a feast for utilitarians.

But what about the rest of us? Part of the pleasure of lunch, especially in an era when most people spend a good chunk of the day sitting in front of a computer with headphones on, is the human interaction it entails. Talking with your work friends and new colleagues while you stand on line, bantering with the men and women behind the counters (some of whom may grow to recognize you and anticipate your needs and quirks), watching what the people ahead of you are ordering for inspiration and tips, even exchanging a simple hello with the person running the cash register. Generally speaking, these interactions — which may be the most we get over the course of the day — come without excessive waits or excessive expenses. To my mind, lunch as it currently exists isn’t exactly in crying need of disruption, especially at the cost of losing the personal touch.

Engineer the people out of a process, and you may drive out some of the time and cost. But you may also engineer some of the humanity out of it.