Breakfast, we’ve long been told, is the most important meal of the day. It sets a precedent for healthy living and fuels the body for the work and play ahead. It’s also playing a key role in pushing businesses to find opportunity in the problem of food waste. It turns out, in fact, that ovular eggs and a square meal may be important players in the circular economy.

That omelet you made this morning? Its eggs were among the 1.3 trillion consumed around the world, an average of 179 eggs per person, each year. And your morning cup of java? It was part of the 12 billion pounds of beans consumed annually.

Think for a moment about how many eggshells and coffee grounds are left behind, the cost of disposing of them, and the greenhouse gases — especially methane — that they will generate as they decompose. Now consider that the World Bank projects (pdf) that the amount of solid waste humans produce around the world will rise from 3.5 billion tons per day in 2010 to 6 billion in 2025. 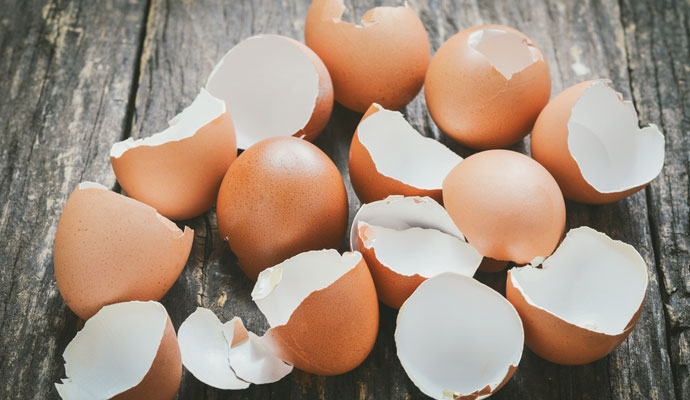 As the demand for landfill space goes up and awareness of the environmental impact of waste rises, businesses will have to pay more to dispose of after-products. In the United States, landfill costs are rising by 2.9 percent annually, according to the market research firm IBISWorld. In Europe, 20 nations have imposed landfill taxes that already cost waste producers more than €2 billion each year and likely will rise further.

So it’s not surprising that companies are finding that it makes economic sense — as well as environmental sense — to turn breakfast waste into useful products.

Last summer, Just Egg, a Leicester, England–based mayonnaise and hard-boiled egg processor that handles as many as 1.5 million eggs each week, started turning used eggshells into chalk powder, which can to be used as a filler to strengthen plastics. Founder Pankaj Pancholi added the powder-producing extension to his existing plant, and partnered with Leicester University scientists who are looking to extend the idea to other companies; Just Egg will earn back the £300,000 cost of the new equipment through saved landfill costs, which run £45,000 to £50,000 a year, and from the plastics companies it expects to buy the powder.

Though the numbers make sense, Pancholi says his motivation for building the plant extension was not primarily financial. “I don’t want to throw a good product on a landfill site,” he told me, adding that getting calcium carbonite from his eggshells also means that less will be needed from chalk mines. “How much will people keep digging?”

Pancholi isn’t alone in seeking more uses for egg waste. In the United States, scientists at Wayne State University have hatched a process for turning eggshells into battery electrodes. Because electrodes use both the shell and the stinky membrane, scientists can skip the tricky step of separating them.

Scientists at Wayne State University have hatched a process for turning eggshells into battery electrodes.

On a per-serving basis, coffee generates far more waste product than eggs. Every day, millions of us lift soggy filters laden with wet grounds and toss them into the garbage. But with coffee waste, there may also be grounds for optimism.

Starbucks offers free bags of coffee grounds to use as compost in gardens. That’s a good start. But the London-based startup Bio-Bean has found even more value in coffee waste. Each year, it collects more than 10 million pounds of grounds and recycles it into biodiesel and biomass pellets. The pellets cost less than oil and natural gas, making them cost-effective not only for coffee shops but for furnace owners.

Nuclear plants are experimenting with using coffee grounds along with spent whisky grains to soak up nuclear waste because of the way they bond with metallic particles and absorb radioactive isotopes. Doing so not only makes it safe to pack and store the neutralized waste, but it is faster and cheaper than traditional cleanup and storage methods.

Designers have turned to coffee grounds to create a composite board called Çurface (pronounced “surface”) used in modern, minimalist furniture. The Taiwanese firm Singtex uses them in an odor-absorbing yarn that, in turn, goes into products sold by more than 110 companies, from American Eagle jeans to Timberland shoe linings. An intriguing coffee-based ink cartridge won the 2009 Greener Gadgets design competition but has not yet come to market.

These ideas may seem quirky or cute. And not all of them will be able to compete on price, quality, or effectiveness with existing products. But as is often the case when it comes to new innovations, it’s the thought that counts. These are manifestations of the rapidly growing circular economy. Indeed, the idea of transforming and repurposing waste into useful materials is catching on, particularly among larger companies. In a recent UPS/GreenBiz (pdf) survey, three-quarters of respondents from firms with more than US$1 billion in revenues said that they used at least some circular economy principles.

And it may turn out that there is big money in eggshells, coffee grounds, and other detritus. The European Commission estimates that European companies alone could save between €466 billion and €914 billion each year, or as much as 8 percent of annual turnover, through a combination of more efficient production and circular economy strategies that repurpose waste.

Of course, the circular economy is in its very early stages. And there are significant obstacles to building more circular businesses. A third of the respondents in the UPS/GreenBiz survey said that when it came to circular economy initiatives, they couldn’t make a sufficient business case, that logistics cost too much, and that executive leadership or consumer understanding still fell short.

Despite the challenges, early adapters shouldn’t hesitate to experiment. There’s no reason to walk on eggshells when you could be turning them into profits.