Let There Be Water: Israel’s Solution for a Water-Starved World 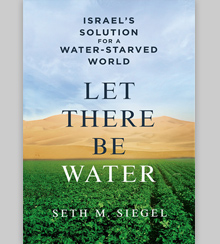 Not too far into Seth Siegel’s revealing book about how Israel became a “water superpower,” he tells the story of the moment when drip irrigation was invented. Drip irrigation is so powerful a technique — dramatically cutting the amount of water that crops require while increasing the amount of food each plant produces — that it may rescue the world from both hunger and thirst in the next 40 years.

In 1933, Simcha Blass, a young water engineer in what was then British-ruled Palestine, was supervising the drilling of a well on a farm. In a row of trees along a fence line, Blass noticed that one tree was significantly taller than the others — even though the trees were all the same species, were roughly the same age, and grew in the same conditions.

It’s rare to see that crystalline moment of curiosity in which an important new idea is born. Blass poked around the base of the big tree and found a tiny leak in a metal irrigation pipe, which was depositing a steady trickle of drips directly onto the tree’s roots.

“I became busy with other plans, but the drop of water that grew a gigantic tree refused to leave me,” Blass would write in his autobiography 40 years later. After he helped launch Israel’s water system, when his own career had improbably foundered, Blass returned to the power of those drops of water, and invented the first rudimentary micro-irrigation technology. He conducted the early studies that not only showed how much water the technology saved, but incredibly also showed that giving plants less water, precisely applied, would cause them to grow more crops.

That is exactly what Israel itself has done over the last 70 years. It has turned water scarcity into water mastery. Siegel’s book aims to do two things: To tell the story of how a tiny country with almost no water resources has become so water rich that it can afford to export billions of gallons of water a year to other countries, and to show how Israel’s prowess is relevant now to a world thirsty for water and water expertise, from California to Brazil, from China to Iran.

Israel has infused its society with a sense of the value and the innovative opportunity of water. This sense is felt in grade-school classrooms and in water utilities themselves. In Israel, wastewater — what those of us in more developed countries often call sewage —is cleaned and reused. Unlike in the U.S., where utilities have to fight public opinion to get recycled water back into the water system, reuse water in Israel is in heavy demand. Most of it goes to agriculture, where it makes up half the irrigation water used by the country’s farmers. In Israel, 85 percent of wastewater is cleaned and reused. Spain has the world’s second-highest recycling rate, at 25 percent. In the U.S., Siegel says, we reuse just 8 percent.

Siegel, a Cornell-educated lawyer who has spent most of his career as a businessman, doesn’t have any apparent prior expertise in water issues, and this is his first book. Yet he appears to have interviewed almost everyone involved in water innovation, water policy, and water management in Israel. And Israel’s journey has some made-for-the-movies moments and characters.

The first significant pipeline into Israel’s Negev desert was built in 1946, amid post–World War II shortages of metals of all kinds. The same Simcha Blass who would go on to invent drip irrigation was in charge of building that pipeline. He found an unlikely stockpile of water pipes: During the Blitz on London, the city constructed an extra piping system to supply water to fight fires caused by the nightly bombing. After the war, the system was dismantled, and Blass managed to have representatives in Europe quietly buy up the pipe and get it to Palestine.

Siegel also tells the story of the first wary partnership between China and Israel designed to help solve China’s continent-wide water problems. In 1983, nine years before the two nations formally established diplomatic relations, China secretly invited Israeli water experts in, and agreed to follow their guidance on smarter irrigation practices and more appropriate crops. But with one condition: The Chinese “demanded that all markings had to be removed from the irrigation equipment and seed packaging that might indicate their Israeli origins.”

“In Israel, 85 percent of wastewater is cleaned and reused. Spain has the world’s second-highest recycling rate, at 25 percent.”

Siegel is not a practiced author, and Let There Be Water has some rough patches. The book starts slowly, with a cookie-cutter essay on global water problems segueing into uninspiring opening pages on what Israeli children are taught about water use in hygiene class and on the passage of early water laws. And Let There Be Water is often frustratingly vague just when you want it to be specific. That first water system built with pipes from the London Blitz to supply desert farms was so expensive that early settlers nicknamed it the “Champagne Pipeline.” But Siegel doesn’t tell us what the pipes cost (or tell us that the cost is lost to history). Siegel describes how Israel raised household water rates nationwide by 40 percent in 2008, resulting in both a widespread outcry and a 16 percent drop in residential water use. But he doesn’t tell us what Israelis pay for water at home — before the rate increase or after.

When Siegel anticipates readers’ questions, however, he nails it. How in the world did Israel get its farmers to adopt purified sewage for their crops? The price of that irrigation water was discounted, its supply was guaranteed regardless of drought, and farmers got 20 percent more than their normal allocation if they took the reuse water. Now, they can’t get enough (and the discounts and bonuses have long since been phased out).

One Israeli official makes an arresting point to Siegel. He compares the current moment in water management to the moment, thousands of years ago, when humans started to cultivate food instead of simply gathering it: We grow food where it needs to be grown and transport it where it needs to be eaten.

Now, the official says, we’ve reached the same point with water —because of reuse, desalination, and micro-irrigation. We can “manufacture” the right water for the right purpose in the right place. The only issues are determination and cost.

That’s truer in a coastal state such as Israel than in, for instance, Nebraska. But Israel’s determination to create water security is a half-century-long lesson in the liberating economic power of smart water, and a vivid illustration that scarcity doesn’t need to lead to deprivation. It can often drive exactly the opposite: innovation and even abundance.