Climate Shock: The Economic Consequences of a Hotter Planet 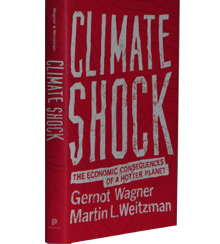 Discussions about the dangers of climate change are often couched in terms that are emotional, value-laden, even biblical. But the world needs to start thinking about climate change in the cold, practical language of insurance and risk management. Viewed through this lens — or green eyeshade — spending money to address climate change in the short term through mechanisms such as a price on carbon emissions, investment in clean energy technology, and forest preservation funds could become a much more palatable topic for a broader class of leaders.

That’s the argument you might expect two economists to make. And indeed, it is roughly the underlying thesis of Climate Shock: The Economic Consequences of a Hotter Planet, written by Gernot Wagner, senior economist at the Environmental Defense Fund, and Martin L. Weitzman, professor of economics at Harvard University. The book delivers a brief but thorough look at the changing climate from economists’ perspective, comparing global warming with other risks and dangers that humanity faces.

The most eye-opening figure in Climate Shock is Wagner and Weitzman’s own analysis that the likelihood of an indisputable global catastrophe — defined as an eventual global average temperature increase of more than 6 degrees Celsius (11 degrees Fahrenheit) — occurring as a result of climate change is around 10 percent. The world would change irrevocably if only half that amount of warming were to occur.

A catastrophic temperature rise could impose costs of between 10 percent and more than 30 percent of global economic output, or between US$7 trillion and more than $22 trillion in 2013 terms. Those costs would be associated with the massive industrial infrastructure investments needed to transition to a world with a new climate and higher sea levels. These economic costs would come on top of the harder-to-quantify loss of human and animal lives and ecosystems.

Given these odds, and considering the huge sums of money at stake, the authors point out that it makes supreme economic sense to invest substantially in addressing climate change in the near term. The jumping-off point for their discussion is governments around the world putting a price on carbon dioxide emissions of at least $40 per ton, through taxes on either energy use or energy production. That’s higher than the price in many other regions — for example, the U.K. has a carbon price floor of £18 (US$27) per ton — but lower than the price in more aggressive emissions battles. Sweden has a carbon tax of $150 per ton.

Economists find so-called Pigovian taxes, such as taxes on carbon emissions, to be elegant, relatively easy to collect, and rational. But even modest carbon taxes have been remarkably contentious issues. Australia just repealed its carbon tax. And the authors note that even fantastical notions, such as building an asteroid detection and deflection system for the earth, seem somehow less controversial than investing in creating ambitious policies to address climate change. Why? Because, the authors point out, climate change is uniquely “global,” “long-term,” “irreversible,” and “uncertain.”

Even fantastical notions, such as an asteroid deflection system, seem less controversial than ambitious policies to address climate change.

And therein lies the very large rub. It’s hard to convince people to insure against a phenomenon or possibility that they don’t believe will affect them imminently, or in which they don’t believe at all. A study released this spring did not find a single U.S. county in which a majority of residents believed global warming would hurt them personally. As is the case with much of the literature on climate change, if you don’t believe in the science on global warming, you won’t find this book compelling. It is not designed to change the minds of nonbelievers about the fundamental science of global warming.

However, the book does serve as a call to arms for business owners and leaders, economists, and policymakers who have been searching for a purely rational, finance-focused take on climate change. Although it includes talk of planetary catastrophe (an obviously necessary topic to include in a work on climate change), the book refreshingly avoids the kind of doom-and-gloom hand-wringing that marks some of the current popular environmental literature on the subject. (In 2012, Wagner expressed his optimistic take in an interview with strategy+business.)

I also appreciated the authors’ bold suggestions for helping address climate change. Carbon pricing is the underlying economic solution. But there’s also an entire chapter dedicated to “What You Can Do,” which includes “vote well,” “recycle well,” “scream well” (be a vocal activist), and profit from fighting climate change. In this way, the book tries to bring the global issue down to the personal level.

The focus on the financial and practical rationales for fighting climate change make the book somewhat dry and plodding at times. And as one might expect from two data-focused economists, it reads more like a group of lectures collected in book form than a consistent nonfiction volume that weaves a narrative, guiding the reader from start to finish.

Activists such as Bill McKibben, New Yorker writer turned global warming alarmist, face significant (and reasonable) criticism for creating movements with unobtainable goals. McKibben wants the world to return to a state in which the concentration of carbon dioxide in the atmosphere is 350 parts per million — where the level was 25 years ago. That’s technologically and economically impossible. Other “solutions,” like divestment from fossil fuels, offer a measure of emotional satisfaction but may not produce useful results. And yet there’s something to be said about the emotion-driven campaigns that can galvanize groups. Climate Shock highlights the potential jolt to balance sheets. It remains an open question as to whether the fear of that shock will be sufficiently powerful to spur the largest and most powerful institutions to action.