Critics of Silicon Valley are having a bit of fun with Juicero, the San Francisco–based startup seeking to disrupt the juicing industry by selling a US$399 Wi-Fi-enabled juicer and $8 bags of fruits and vegetables. The company had raised nearly $120 million in venture capital funding. But when Bloomberg tested the machine against the hands of one of its reporters — a breed not generally known for its muscularity and physical fitness — it found that people can do the job of juicing just as well, and just as fast, as the Juicero.

There’s a tendency to view this story as evidence of our own decadence. Can people really not find better uses for their money? Think of the scholarships, or investments in public infrastructure, that $120 million could fund. And in an age when so many lack access to clean water, electricity, and food, shouldn’t we be applying our collective engineering talents to more, um, pressing problems?

Just as the artwork of Italian Renaissance descended into overwrought Mannerism, something similar seems to be happening with engineering and technology. Engineers keep layering functions, adornments, and bells and whistles onto highly complex products and systems that already work pretty well, simply because they can, or to provide some marginal differentiation in the marketplace, or to goose revenues by forcing consumers to upgrade. 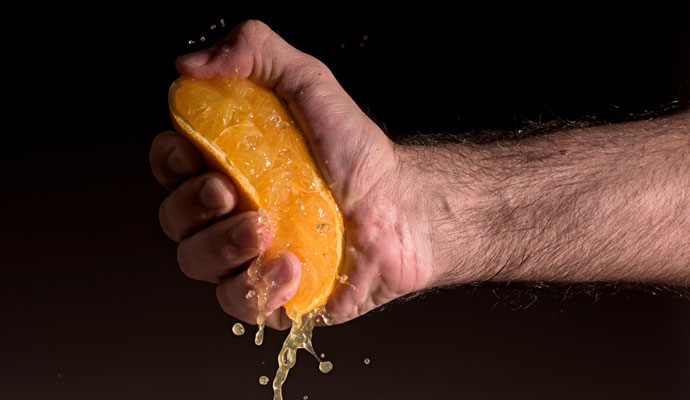 The result can often wind up delivering products that don’t really meet a clear need. I mean, if Juicero is the answer, what precisely is the question? I suspect the Apple watch has been met with a relatively cold reception precisely because there’s a limit to the level of functionality that most people want from their wristwatch — and it has long since been reached.

As a consumer — and I know I’m pushing up into the higher reaches of the desirable demographic — I often feel overwhelmed and hence paralyzed by the level of engineering in basic products. I learned to drive on a manual car in which you had to roll down the windows by hand. But when I sit down in the cockpit of even a basic rental car, I’m baffled by the welter of interfaces that offer me the ability to control speed, climate, music, seat position, and connectivity. And the more complex these products gets, of course, the more complicated and expensive it is to repair them.

I just counted the number of buttons on my television remote: There are 62. That’s not even the device that changes the channel. And when I ask the millennials in my household to tell me if it is raining, they ask Alexa or Siri instead of simply looking out the window. (Guess which is a quicker and more accurate method?)

I just counted the number of buttons on my television remote: There are 62.

But these developments should cause us to critique engineering cultures, not rail against them. Engineers, bless them, derive meaning from automating processes and add functionality and speed without increasing the use of resources or cost. And for that we owe them a debt of immense gratitude. Investors and corporate managers turn them loose on supply chains, huge machines, electronics, heating systems, wireless communications — you name it — and tell them to work their magic. And the results have been remarkable: the iPhone, personal computers, e-commerce, giant wind turbines.

The problem is that it’s hard to tell people when to stop. Engineers, like every other profession, often become enamored of their own work. And it’s highly arrogant for an outsider to stipulate just how much innovation and convenience is too much, or when the line crosses from cool and useful to laughable and useless.

There’s a great scene in the movie Amadeus in which the emperor tells the genius composer his latest piece is too busy. “There are simply too many notes. That’s all. Just cut a few, and it will be perfect.” Mozart’s unbelieving response: “Which few did you have in mind?”

If we start asking engineers to stop trying to innovate and reinvent, it will inevitably lead to similar questions: Which few functions don’t you want? Which few systems do you not want to improve? Which few products that you didn’t know you wanted should we not invent?

The Juicero, which has inspired a latter-day John Henry moment, may not in fact offer a meaningful improvement on existing methods of turning fruits and vegetables into liquids. But the occasionally fatuous bauble is the price we pay for having all the really fantastic can’t-live-without devices that run our lives.