Bottom Line: With manufacturing put into the hands of small firms and even consumers, traditional value chains may no longer be as advantageous.

It’s long been a lament of astronauts: If only there were pizza in space. So a couple of years ago, NASA awarded a US$125,000 grant to a mechanical engineer to solve the problem. He produced a prototype 3D printer that “prints” layers of food out of powdered cartridges. First comes a layer of dough (cooked via a heat plate at the bottom of the printer); then some tomato powder, water, and oil for a sauce; all topped by a mouthwatering “protein layer.” A 3D-printed pizza has to be at least better than freeze-dried.

If 3D printing can deliver pizza to outer space, what can it do back home? That’s becoming less and less of an idle question as the 3D printer continues to move away from its origins as a bulky, ultra-expensive plaything for hobbyists and early adopters.

Thanks to dramatic reductions in price and rapid advances in open-source development, 3D printers have gained ground at both mainstream manufacturing plants and boutique design shops. Even models priced below $1,000 can print ever faster, bigger, and at a higher quality, meaning that households may soon choose to invest in a printer and make, rather than buy, more of the products they use. Some researchers, and the Economist, have argued that the technology could launch the next industrial revolution, in which large-scale industrial processes are replaced by people fabricating their own things. 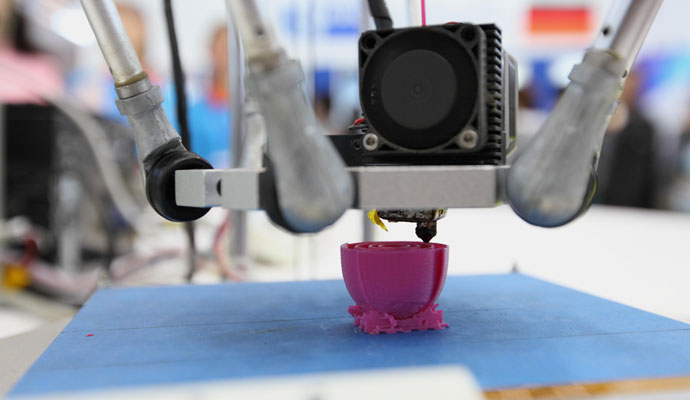 Indeed, advocates say 3D printers threaten to undermine some of the basic tenets of the international economy: namely, that multinational companies (MNCs) enjoy an advantage because of their sprawling global value chains. Operating on a worldwide scale allows these firms to exploit cheap labor pools and distribution methods, favorable import/export regulations, and rapidly advancing communications capabilities. If someone in the U.S. can 3D print a gadget in their home that used to have to be made in China and shipped overseas, it’s not hard to see how the business landscape could shift for manufacturers, middlemen, and retailers alike.

Based on a comprehensive review of the latest research, media reports, and expert analysis on 3D printing, the authors of a new study have determined which industries have the most at stake. They have also pinpointed several sector-specific factors that will likely determine how disruptive the technology will be to an industry’s global value chain.

Companies that make products out of solid wood, leather, natural textiles, or paper probably won’t be affected, the authors suggest, because natural materials aren’t suitable as the filament used for 3D printing. Neither will firms in the business of producing raw materials — such as petroleum products out of crude oil or basic metals out of iron ore. Instead, it is the smallest, simplest products that are the easiest to replicate with 3D printing, which is why the technology is already having an impact on companies in industries as diverse as jewelry, medical and musical instruments, sporting goods, and toys.

And according to the authors, some other industries you might not expect are ripe for the adoption of the technology. Although right now about the most you can hope for from the 3D printing of edible products is an elaborately shaped chocolate candy, the space pizza underscores how 3D printers can create complex goods without the input of a highly skilled worker, and the food and restaurant industry should take note. Similarly, the 3D printing of apparel is currently limited to plastic items, but as it expands to include more synthetic materials, such as nylon, the clothing industry could be drawn to 3D printing — especially because patents and copyrights aren’t prevalent in the fashion world.

The authors point out that the number of Google Scholar papers about 3D printing using metals has increased markedly, from 686 in 2011 to 2,530 in 2013. A similar uptick can be seen in studies about 3D printing with ceramics — clear signs that industries tempted to dismiss 3D printing as a plastics-only enterprise are short-sighted.

If 3D printing can deliver pizza to outer space, what can it do back home?

Overall, 3D printing seems more applicable to companies that value customization and responsiveness to consumers’ fast-changing preferences, or those in which small batches of specialized products take precedence over mass-produced commodities that exploit economies of scale. Industries that are already highly automated and revolve around large production runs probably won’t much benefit from, or be challenged by, the flexibility 3D printing provides. But when even a short delay can prove costly, 3D printing can be especially handy — which is why shipping companies have begun to install the devices on their cargo ships so spare or replacement parts for their vessels can be quickly produced at sea.

So what does this all mean for the global value chains that have buoyed MNCs over the past several decades? The authors suggest that the diffusion of 3D printing in an industry points to shorter, more localized value chains — in the hands of far more players — where manufacturing takes place closer to the end-user. With smaller firms, and even households, able to manufacture certain products, the requirement of large numbers of low-paid workers, long a driver of MNC strategy, significantly diminishes. So does the need for firms that produce intermediate products, which could find themselves leapfrogged because of 3D printers’ ability to turn raw materials, which are less expensive to import and export, into finished goods.

At the extreme upstream of the value chain, companies that are involved in the extraction and supplying of raw materials probably have the most to gain from the rise of 3D printing. Not all raw resources can be sourced locally, of course, or by the average household or niche printing business. So if 3D printing does take hold, the authors posit, the need to deliver small batches of raw materials to many more players means that MNCs with control of the requisite resources will gain a much more important role.