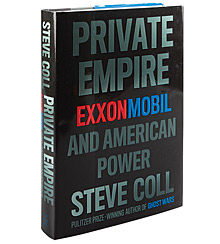 In Private Empire: ExxonMobil and American Power, Steve Coll, a Pulitzer Prize–winning journalist, weaves a strong, behind-the-scenes narrative of how one of the largest companies in the world operates. It is a lengthy account; the book’s 685 pages track the ExxonMobil Corporation’s history since the Exxon Valdez spill in 1989, and Coll covers topics as seemingly disparate as lobbying in Washington, DC, and drilling for oil in the Arctic Ocean.

ExxonMobil is the largest remnant of John D. Rockefeller’s Standard Oil Trust, which was broken up in 1911 by the Supreme Court and divided into 34 separate companies. Today, the company stands atop the Fortune 500 list with 2011 revenues of US$452 billion and profits of $41 billion.

More than a century ago, another journalist found this company to be a rich subject for a book. In 1902, Ida Minerva Tarbell, a star among the muckraking journalists of the day, began publishing her exhaustive profile of the company created by Rockefeller to house and exploit his holdings in the burgeoning oil industry. Her exposé extended to 19 consecutive issues of McClure’s magazine, and in 1904, she turned those articles into a two-volume, 815-page book published by Macmillan under the title The History of the Standard Oil Company.

Few books have had the impact Tarbell’s had. Its compelling account of how Rockefeller assembled the pieces of his empire, buttressed with stories of competitors being smashed under his iron hand, led to a series of lawsuits that culminated in the Supreme Court’s declaration of the company as an “unreasonable” monopoly. Steve Weinberg, professor emeritus at the Missouri School of Journalism, called Tarbell’s book “arguably the greatest work of investigative journalism ever written” (see “Best Business Books 2008: Life Stories,” by Nell Minow, s+b, Winter 2008).

Rockefeller’s genius lay in his recognition that it didn’t matter who pumped the oil—the spoils would go to those who refined and transported it. He built a network of refineries and pipelines that dominated the industry, using his volume as leverage to extract low rates and rebates from the railroads. He coerced other refineries to join Standard Oil, warning them that if they didn’t, they would be “crushed.” Tarbell discovered from her assiduous research that Rockefeller’s chutzpah was such that he even bullied the railroads into granting him rebates based on the higher shipping costs paid by his competitors.

Steve Coll’s title, Private Empire, is an apt description of the fruits of Rockefeller’s labor, but his book is neither exposé nor hagiography. Nowhere is there a hint of the kind of skullduggery unearthed by Tarbell. Run now by engineers who keep a low profile, ExxonMobil has tentacles stretching to every corner of the world.

The company’s reach and power are obvious in the vignettes Coll relates. Rex Tillerson, who succeeded Lee Raymond as CEO in 2006, negotiated an oil-drilling deal with Iraqi Kurds without bothering to inform the Obama administration in advance. In 2001, when Indian Prime Minister Manmohan Singh asked then President George W. Bush to put pressure on ExxonMobil to allow India’s state-owned oil company to participate in an offshore Russian drilling project, Bush replied: “Nobody tells those guys what to do.”

Those guys are blunt, too. At an industry meeting in Washington, DC, Raymond was asked why the company wasn’t building more refineries in the United States. “Why would I want to do that?” Raymond responded.

“Because the United States needs it…for security,” said the questioner.

“I am not a U.S. company and I don’t make decisions based on what’s good for the U.S,” Raymond replied.

“Exxon’s attitude toward the other majors has always been, ‘We are Oil—the rest of you are kids,’” a competing executive told Coll. During the discussion that followed BP’s disastrous 2010 Deepwater Horizon blowout in the Gulf of Mexico, Tillerson openly criticized BP and said that ExxonMobil would never have made the mistakes BP made. Speaking at a private dinner with editors and writers at the Metropolitan Club in Washington, DC, he said that although BP had fine engineers, the company failed to emphasize safety or individual accountability, as Exxon had done after the Valdez spill in Prince William Sound. “They’ve always been an outlier,” said Tillerson. “We work with them all over the world and we’ve seen this.” (Soon after, writes Coll, “a ruptured ExxonMobil pipeline dumped about a million gallons of oil in coastal areas of Nigeria, soiling shorelines dotted by impoverished seaside villages.”)

Unsurprisingly, Coll found that executives at other oil companies regard the executives at ExxonMobil as ruthless, self-isolating, and inscrutable, but also as priggish Presbyterian deacons who proselytized the Sunday school creed Rockefeller had lived by: “We don’t smoke; we don’t chew; we don’t hang with those who do.”

Coll found out firsthand how ExxonMobil guards its privacy. The company authorized eight executives to provide background interviews, which were “helpful but limited.” None of these executives agreed to be quoted by name. Tillerson, the CEO, flatly refused to be interviewed, and ExxonMobil “was the only party of the dozens reached during the fact-checking process that declined to participate.” Fortunately for Coll, he had resources such as court transcripts, Freedom of Information Act requests, and State Department cables released by WikiLeaks.

Coll gives a grudging nod to the business acumen of the company he depicts—just as Ida Tarbell did before him. The penultimate chapter in Tarbell’s book is titled “The Legitimate Greatness of the Standard Oil Company,” and in it she states that “this huge bulk, blackened by commercial sin, has always been strong in all great business qualities—in energy, in intelligence, in dauntlessness. It has always been rich in youth as well as greed, in brains as well as unscrupulousness.”

Coll similarly reports, “Around an industry conference table, Exxon’s delegation usually dominated. ‘You don’t really like them, but you respect them a lot because you know they are really smart,’ said a competing executive.”

In the conclusion of her book, Tarbell faults Standard Oil on ethical grounds, decrying people who justify the “force and fraud” employed by Rockefeller by saying, “It’s just business.” No such lament comes from Steve Coll, who concludes that ExxonMobil’s ascendancy reflects “in part the growing relative power of corporations in the American political and economic system.” He notes that corporate profits in 2011 “made up a larger share of American national income, when compared to workers’ wages and small business income, than at any time since 1929 when such statistics were first recorded.” And he points out that ExxonMobil, which is big enough to have “its own foreign, security, and economic policies,” still has its triple-A credit rating, which the federal government has lost. A private empire indeed.