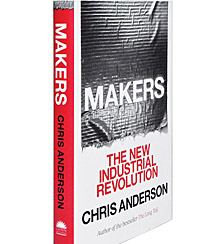 If you’re looking for the future of manufacturing, Chris Anderson, former editor-in-chief of Wired, would have you check the garage. In his latest book, Makers: The New Industrial Revolution, Anderson describes how inexpensive and increasingly sophisticated digital fabrication tools, a growing culture of do-it-yourself enthusiasts raised on the Internet, and the spread of open intellectual property practices are ushering in a new industrial revolution.

Makers builds on the premise of Anderson’s first book, The Long Tail: Why the Future of Business Is Selling Less of More (Hyperion, 2006). In The Long Tail, he argued that although the highly networked digital economy might appear to be dominated by a few large players, a wealth of opportunity exists for small players because such an economy does not require distribution scale to reach the ends of the demand curve. These opportunities, Anderson contends in his new book, are supporting the rise of the “maker” movement and changing the face of manufacturing.

The maker movement is native to the Internet, over which weekend tinkerers share plans and post tutorials in online forums. Fueled by websites like Instructables.com and publications like Make magazine, makers are not only making things for themselves and for their friends and colleagues, but also starting businesses that sell components, kits, and finished products.

Several maker businesses have become multimillion-dollar companies in recent years. Anderson cites SparkFun, an electronics component manufacturer with annual revenues around US$30 million; MakerBot, a 3-D printer maker that has attracted $10 million from investors, including Amazon’s Jeff Bezos; and 3D Robotics, which was poised to achieve more than $5 million in sales by the end of 2012. He offers no growth predictions for the movement, but clearly he is betting on it: In November 2012, Anderson left his job at Wired to be the full-time CEO of 3D Robotics, which he cofounded.

What’s different about maker companies, says Anderson, is that they regard their customers as participants in the business. For instance, they publish the plans for their products online, because they know that eager customers will offer improvements. Some companies, such as 3D Robotics, reward or hire these customers for their contributions. Anderson’s description of how his company integrates customers’ work is one of the stronger chapters in the book, and a useful read for any executive who wants to make community more than a buzzword.

Distributed knowledge isn’t the only factor contributing to the growth of the maker movement. Inexpensive digital fabrication tools have played a huge role, and now makers are beginning to make their own 3D printers, laser cutters, and robot mills (see “A Strategist’s Guide to Digital Fabrication,” by Tom Igoe and Catarina Mota, s+b, Autumn 2011). Of course, they’re sharing the plans for these new tools online as well.

The impact of these developments on manufacturing could be significant. Launching a successful manufacturing company no longer requires reaching a mass market, as long as you can reach the right customers, wherever they are. Crowdfunding, through presales on such sites as Kickstarter.com and Launcht.com, is making it possible for manufacturing startups to raise their initial capital without selling ownership stakes to venture capitalists. Online marketplaces—for example, Etsy.com and Fab.com—are giving unknown designers a greater ability to reach their target audiences, and supplier aggregators such as MFG.com and Alibaba.com make it possible for a garage shop to work with vendors around the world.

Anderson recognizes that the world of makers isn’t a utopia. Yes, makers create jobs. But, he notes, “It’s actually more correct to say that small businesses destroy a lot of jobs that they create, since most small businesses fail before their third year.” A global network of small suppliers is likewise fragile. Its transport infrastructure is subject to the whims of an increasingly volatile global climate and political upheavals, and small companies don’t have the pull that large ones do to put pressure on their shippers when things go wrong. What makes this situation work for small businesses is not that it’s perfect, but that it’s good enough. If part of their enabling infrastructure fails them, they innovate to get around it. It’s the momentum, not the stability, that Anderson is banking on to create growth.

To avoid disruptions, large manufacturers would do well to keep an eye on the maker movement. “General Motors and General Electric aren’t going away,” says Anderson, “but then again, neither did AT&T and BT when the Web arose.” Telecommunications companies are now platforms for many-to-many communication and innovation. Small Internet service providers are their customers, not their competitors. It’s a good lesson for manufacturers: Those companies that see themselves as platforms for innovation will do best in a many-to-many market.