The Second Machine Age: Work, Progress, and Prosperity in a Time of Brilliant Technologies 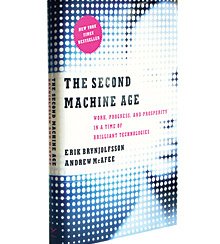 Saying that the pace of change in today’s business world is accelerating has become a leading cliché among executives and business consultants. But most of us leave it there. You can’t prove it, right? Besides, it’s not like we’re the first people to live through a time of aggressive transformation. Consider how British business leaders must have felt during the reign of King George III, as the steam engine, the cotton gin, and the railroad upended the old commercial world order.

In their new book, however, Erik Brynjolfsson and Andrew McAfee make the case that the cliché is indeed true, and they do it in a highly persuasive manner. The Second Machine Age: Work, Progress, and Prosperity in a Time of Brilliant Technologies not only demonstrates that technological change is accelerating faster than ever before, but explains why it’s so difficult for us to get a handle on it. It is a book that will change the way you think about the world, and the future.

The authors start by telling the story of the driverless car. In 2002, the U.S. Defense Advanced Research Projects Agency (DARPA) offered US$1 million to the winner of a race for completely autonomous vehicles; they were to compete on a 150-mile course in the Mojave Desert. When the race was held in 2004, none of the entrants finished the course—in fact, the farthest any got was 7.4 miles. Economists, pundits, and journalists were quick to proclaim that as smart as computers were, driving a car was something they would never be able to do. Brynjolfsson, a professor at MIT’s Sloan School of Management and director of the MIT Center for Digital Business, and McAfee, the center’s associate director, acknowledge that they agreed with the naysayers at the time. But less than six years later, the autonomous car was a fact, and since then, Google’s version has logged hundreds of thousands of accident-free miles thanks to the relentless and exponential gains in computing power and memory predicted by Moore’s Law.

Why was everyone wrong? The authors argue that “our brains are not well equipped to understand sustained exponential growth. In particular, we severely underestimate how big the numbers can get.” They use a tale about the invention of chess, retold by futurist Ray Kurzweil, the current head of engineering at Google, as their central metaphor to show why this is so.

Our brains are not well equipped to understand sustained exponential growth.

The emperor of India, so this version of the story goes, was so impressed with the ingenuity of the game’s inventor that he invited him to name his reward. The inventor asked that the emperor pay him in rice by putting one grain on the first of the chessboard’s 64 squares, two on the next, and so forth—multiplying each subsequent number by itself (or raising it by the power of two).

Such is the power of compounding that by the time you reach the 32nd square, you’ve got 4 billion grains—about the yield of one large rice field. But if you were able to continue to the 64th square, you would have 264-1, or more than 18 quintillion grains of rice—a pile bigger than Mt. Everest, and more rice than has been produced in the history of the world. (Once the emperor figured this out, some versions of the story say, he had the inventor executed.)

It’s the second half of the chessboard where the numbers overwhelm our ability to comprehend them, and that, Brynjolfsson and McAfee believe, is where we are today when it comes to the exponential growth of computing capabilities. They go on to examine the ways that computerized technologies and smarter machines are already remaking the way we work, our business models, and our society. The crucial question is what people are going to do for a living in the second machine age as exponentially smarter machines become capable of doing much of the work done not only by laborers, but also by managers and professionals. These are changes that will come very quickly, conclude the authors, as we venture further onto the chessboard’s second half.

Brynjolfsson and McAfee do address the increasing concentration of wealth and income inequality that the second machine age is enabling, but they soft-pedal the troubling implications of the word inequality by calling it instead “the spread” between the smaller number of people who stand to benefit as wealth accumulates and the number of people who will lose as their jobs disappear. This optimistic spin is echoed at the end of the book, where the authors argue that individuals can prosper if they learn to race with the machines rather than against the machines. They also call for a set of prophylactic policy reforms to ease the transition that are hardly revolutionary, but are nevertheless sensible, such as improving education, investing in infrastructure, encouraging startups, and switching to a smarter, more innovation-friendly tax system.

In their generally rosy outlook, the authors are following in the footsteps of British economist John Maynard Keynes. Keynes foresaw the implications of rising productivity and the coming of what he dubbed “technological employment” in a 1930 essay titled “Economic Possibilities for Our Grandchildren.” He envisioned a day 100 years out when humankind would become so productive that nobody would need to work as much, and would, as a result, turn away from the pursuit of wealth: “For the first time since his creation man will be faced with his real, his permanent problem—how to use his freedom from pressing economic cares, how to occupy the leisure, which science and compound interest will have won for him, to live wisely and agreeably and well.”

It’s easy to be more pessimistic. Keynes’s target date for this prediction was 2030, and at least so far, the evidence is not encouraging. For instance, instead of a turning away from the pursuit of wealth, what we’ve seen in some of the world’s most prosperous nations is an increasing appetite for multimillion-dollar apartments, mansions in gated communities, fancy cars, and gold-plated bathroom fixtures.

Keynes—and Brynjolfsson and McAfee—may turn out to be right, of course. The main message of The Second Machine Age is that we’re about to find out.

Topics: execution, authors, defense, brain, investing
Get s+b's award-winning newsletter delivered to your inbox. Sign up No, thanks