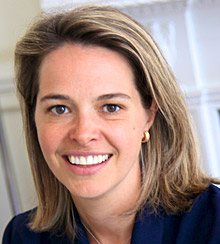 In a multicultural workplace, misunderstandings happen. If your British manager tells you something is “interesting,” does he really mean the opposite? Why do your Dutch coworkers feel so comfortable talking back to the boss?

Erin Meyer helps companies navigate these subtle cultural cues. In her new book, The Culture Map: Breaking through the Invisible Boundaries of Global Business (Public Affairs, 2014), the affiliate professor of organizational behavior at INSEAD looks at the ways people from different cultures can learn one another’s social cues in professional settings. According to Meyer, multinational companies have spent significant time and energy trying to figure out how to appeal to a wide array of consumers, and not enough time figuring out how to help their own employees work together.

How to Lead a Successful Global Team

INSEAD professor Erin Meyer discusses how companies can boost the efficiency of their multinational teams by focusing on how they communicate across cultures.

It all starts with communication, Meyer says—being open about a colleague’s behaviors that might seem different from yours, talking about those differences, and sharing that knowledge with other colleagues. Her research has powerful implications for managers leading multicultural teams. Meyer, who appeared on the 2013 Thinkers 50 “On the Radar” list, recently spoke with strategy+business about how her work can help companies make the most of their global resources.

S+B: What are some of the key challenges multinationals face when designing global teams?
Meyer: Most multinational companies think, “Cultural differences, that’s about how to exchange business cards, or what kind of gifts to buy,” instead of recognizing that [managing these differences] is really about understanding psychology—the subtle differences in what types of arguments we find persuasive and what leads us to trust a person from another part of the world. Companies often put someone in a leadership role abroad simply because that person was a top performer at home. They think, “This guy’s a dynamo, let’s give him more responsibility.” But sometimes, the people who have been the most successful in their own culture—especially, for instance, if they’re over 40, and they’ve had some 20 years of thorough conditioning on how to succeed—struggle when put in charge of a team in another country because it calls into question much of what they have learned over their career.

The people companies hire for global positions need to be extremely flexible. They need to understand, for example, that in Denmark it motivates people when the boss acts like a facilitator among equals, but in Russia the staff responds better when the boss is clearly in charge. Fifteen years ago, when companies weren’t so globalized, managers mostly just had to be good at motivating people from their own country. But now multinational companies need to think hard about how to prepare their managers to adapt their leadership style to be effective in all the different countries they might be working in, and that’s complex. [For more on the challenges that come with international work, see “The Untapped Value of Overseas Experience,” by Dan Wang.]

Of course, you’re not going to find someone who knows how to motivate employees in every world culture. Even if you could, trying to adapt to every member of a global team just leads to chaos and inefficiency. What you need is someone who knows when to adapt to different team members’ cultural norms and when to set a strong team culture to supersede those norms and bring everyone onto the same page.

S+B: When looking for managers to lead global teams, how valuable is international experience?
Meyer: I generally see that people who are living in a foreign country react one of two ways: either by learning a lot or by totally shutting out the new culture. The best interview technique to find out if someone is going to be good at working in another country is to ask them, “When you were living abroad, what are some things that you noticed and learned about how people there work differently?” People who are going to be effective will give positive descriptions of what that other culture did differently. If they say, “What’s great about them is that they are so hierarchical in that culture that when the boss says, ‘Go right,’ everyone goes right, and it creates this beautiful efficiency,” it’s a sign they can look at something that would be foreign to their own culture and see the positive in it.

But many people, when you ask them that question, will respond by telling you what people from another culture did inappropriately: “They’re not good communicators. They’re chaotic. They don’t voice their opinions in front of the boss.” And that is a sign that those individuals may have more difficulty.

S+B: What are companies doing wrong in their hiring process?
Meyer: One problem that arises—and this often happens with U.S. companies—is that they have a strong American culture in their organization. When they’re in China, for example, and are hiring Chinese employees for their company, they’re choosing the most “American” Chinese talent they can find. Internally, that makes things easier. But it has two clear disadvantages: First, it may make it more difficult for these firms to be close to their customers. I worked with one Brazilian sales director for a big American consulting firm. His explicit communication style and task-based approach was perfect for his American boss, but not at all suitable for his Brazilian clients. It’s because [company leaders] hired him with their American lens.

Second, people in various parts of the world are trained since childhood to see things differently. If you recognize that, and you manage a global team, it can be a huge advantage to have some team members who see the forest while others see the trees. But if you’ve hired the people who are the most similar to your own culture, then you lose out on the advantage of diversity.

"If you hire the people most similar to your own culture, you lose out on the advantage of diversity."

S+B: Has the type of cultural sensitivity that we’ve fostered, especially in the U.S., impeded multinationals’ efforts to approach multiculturalism as you’re suggesting? How do we work around that?
Meyer: In the United States, because of our history, we are sensitive about discussing group identity. And culture is the personality of a group. People worry, “If I start talking about culture, then I may be suggesting that everybody from that culture is the same.”

But the problem is, if you don’t talk about culture, everyone continues to view everything through their own lens. And then they make erroneous or negative assessments of what’s going on. For example, when I worked with a team of American and Thai coworkers, the Americans did 90 percent of the talking, and their interpretation of the situation was that their Thai counterparts were shy and had nothing to contribute. Neither point was true. In an American environment, we are trained to make our voices heard at all costs. We sometimes interrupt one another, and we don’t like silence. In Thailand, people are conditioned to wait carefully for the other person to finish speaking. They leave a moment of silence to really consider what the other person has said, and then they speak. If the Americans had known this, they would have realized it wasn’t about personality, but rather about cultural differences—and they could have implemented a few simple meeting rules to achieve a more balanced participation.

We all come from somewhere. Where we come from affects the way we view things, and the way we understand one another. In every international situation, some things are cultural, and some things are personal. If it’s cultural, then you need to help people in the room understand that, for example, when someone speaks in a way that is startlingly direct, that’s because where he comes from, that communication style is appropriate, and is not considered rude. If it’s personal, then you need to sit down with that person and teach him to improve his communication skills. Once the dialogue gets going and everyone has a language with which to start articulating these differences, it’s much easier. It’s not a big deal anymore.

S+B: Are there trade-offs or negative aspects to multiculturalism?
Meyer: The advantage to having people from all over the world on a team is that you may find that you have more innovation and creativity, and that you’re closer to your local markets. The disadvantage is that multinational teamwork is usually a lot less efficient than monocultural teamwork. When we’re all from the same culture, we don’t have to talk about how we work together. We have the same assumptions—we just get to work. If we’re from all over the world, and if we don’t spend time talking about how we’re going to work, we end up wasting a lot of time because we have different assumptions. Global teamwork has big rewards, but it also requires a big investment.

Some companies today are just starting to focus on what Germans do best, what Indonesians do best, what Brazilians do best, and so on, and how they can take those skill sets and leverage them as assets for the company. If you’re mixing up cultures in a random way, without encouraging openness and dialogue and preparing people to understand how to truly collaborate, then you’re losing those benefits. Companies need to think about all of these things when designing multicultural teams.