Bold: How to Go Big, Create Wealth, and Impact the World 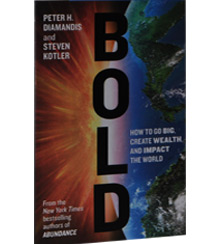 What comes first: the TED talk or the book?

That’s the fundamental question readers might reasonably ask after finishing Bold: How to Go Big, Create Wealth, and Impact the World, the new book by Peter Diamandis and Steven Kotler. Bold follows up on the duo’s previous bestseller, Abundance: The Future Is Better Than You Think (Free Press, 2012), a paean to the ability of technology to solve even the most pernicious problems, which launched several TED talks. And Bold appears to be written either with the same intent or as a result of that process.

Bold claims to be a guide on how to tap into new innovation and capitalize on it. The main and recurring theme is that innovation now occurs at an exponential pace. Readers familiar with mathematics may tire of the repetitive descriptions of the difference between exponential and linear growth. Sample: “Unlike the +1 progression of linear growth, wherein 1 and 2 becomes 3 becomes 4 and so forth, exponential growth is compound doubling: 1 becomes 2 becomes 4 becomes 8 and so on.”

And because innovation now occurs at this rapid pace, say the authors, only the smartest and the quickest will prosper while large meandering firms that can’t keep up will be wiped out. Instagram, the photo-sharing app bought by Facebook for US$1 billion, is an example of a bold company.

Each chapter coins a new word or phrase to describe a long-present phenomenon and then lists a series of steps to take in order to achieve it. For instance, one chapter describes how to achieve flow, which is vital for success. Flow is simply being engaged and productive in your work. In another chapter the authors acknowledge that credibility is necessary to raise money and gain traction in the market. To illustrate this point, they construct a figure with one horizontal line labeled “credible” and a parallel line above it labeled “super credible.” Layered on top are several squiggly lines trending upward at different rates, which represent potential paths. Readers are instructed to choose the one that puts them above the “super credible” line. Diamandis attempts to establish super credibility by frequently letting the reader know he attended MIT and has a relationship with Elon Musk, the uber-credible founder of Tesla and SpaceX. At times while reading this book, I couldn’t help but visualize a dark room, a large crowd, a speaker clad in black taking a pregnant pause, and PowerPoint slides.

Although the book is coauthored, it is written in the first-person singular from the perspective of Diamandis, who, in addition to MIT, studied at Harvard and has a medical degree. But instead of practicing as a physician, Diamandis pursued various entrepreneurial ventures in the boldest of pursuits: space exploration. One of his companies, Planetary Resources, mines asteroids. In addition, he runs the XPrize Foundation, which sponsors contests wherein winning teams that find solutions working toward “bold and audacious goals” win cash prizes of $1 million or more. Diamandis also founded Singularity University, which offers workshops out of Silicon Valley on “exponentially growing technologies” and aims to address “humanity’s grand challenges.”

Humble, these authors are not.

Indeed, Bold holds up a mirror to the often self-satisfied culture of America’s technology industry — which has plenty of accomplishments to be proud of, but which has also developed a sense of hubris and can be plagued by a lack of self-awareness.

Bold provides a powerful glimpse into the central contradiction at the heart of the Silicon Valley culture. On the one hand, its denizens have outright disdain for existing, storied institutions, maturity, and wisdom. But on the other, the hostility coexists with relentless name-dropping to establish “super credibility.” When raising funds for Planetary Resources, the authors tell us, Diamandis and his partner included “folks like Larry Page, Eric Schmidt, Ram Shriram (Google’s first investor), Ross Perot, Jr., Charles Simonyi (Microsoft’s chief architect), and Richard Branson.” Enlisting such boldface names can “help turn dank coal into glittering diamonds.”

Reading Bold, one can fully understand what leads a 25-year-old to believe he possesses the knowledge, expertise, and insight to change the world and totally dismiss older, more experienced people around him, while telling you he once saw Steve Jobs drink herbal tea.

That said, some of the nitty-gritty pieces of advice in Bold are fairly helpful. They include counsel on working hard; setting reasonable, achievable goals; and cooperating with your coworkers. Those who aren’t lucky enough to have MIT and Google founder Larry Page vouch for them can build “super credibility” through small, hard-won, and solid achievements.

The final three chapters would make a useful book in their own right. The prospective title? I suggest How to Get People to Give You Money and Work for Free. Bold explains the world of crowdfunding and crowdsourcing. Rather than offering debt or equity in exchange for capital, the authors suggest giving gifts or a T-shirt in response to donations. When Diamandis raised capital for Planetary Resources, a $25 donation was rewarded with a “space selfie” (someone takes a picture of your picture from outer space). He raised more than $1.5 million in 32 days. Bold suggests that anyone, even if they don’t have important people backing them (and at this point the authors again present a list of their powerful friends), can easily raise $100,000.

When Diamandis raised capital for Planetary Resources, a $25 donation was rewarded with a “space selfie.”

These chapters stress the importance of building and cultivating an online community, which you can later tap to raise capital, or to launch a contest among your avid followers to do your grunt work. To be fair, the single prize-winning team (but no one else) will be paid for their efforts — in cash, not space selfies.

Bold is heavy on anecdote, light on data. The authors claim the world is rife with possibilities for forming the next Google, but don’t reconcile that with drop-offs in IPOs since the tech bubble. They also don’t explain why, despite a bounty of earth-shattering innovations ripe for the picking, productivity been relatively flat since the 1970s.

But one can’t deny there is something seductive about the narrative. While reading it, you can’t help but believe that you, too, even if you don’t possess the authors’ money and connections, have the potential to change the world. You just have to try, fail forward, and ignore anyone who tells you different.

Topics: innovation, authors, crowdfunding, writers, data
Get s+b's award-winning newsletter delivered to your inbox. Sign up No, thanks