My father was a used-car salesman. And it was my experience of watching him work that led me to be fascinated with all kinds of business practices — some legitimate, and some that probably crossed the line. 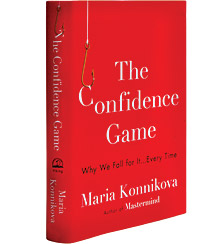 Perhaps that’s why I find Maria Konnikova’s book The Confidence Game (Viking, 2016) so compelling. Konnikova, a contributing writer at The New Yorker, has written a book that is so detailed about the art and history of the confidence man that it could almost serve as a textbook for aspiring criminals.

Writing in a clear and straightforward manner, Konnikova details both lesser-known frauds (a Canadian doctor who falsified his credentials and went on to operate successfully on 19 sailors) and infamous cases like that of Bernard Madoff. Among her many tales is the alarming story of a physics professor in his sixties who became so convinced of a young bikini model’s love for him that he was tricked into smuggling drugs for her.

The unfortunate and super-smart physics professor was suffering after a recent divorce. He went online seeking romance but instead found himself involved in a drug-trafficking operation. Konnikova makes it clear that technological changes, such as the kind of online dating sites where the professor connected with the model, are opening up new avenues for scam artists to reach vulnerable targets. Online scams made up 40 percent of all consumer fraud in 2011, up from 20 percent in 2007, according to statistics Konnikova cites from the FTC and AARP. Technology, warns Konnikova, is ushering in a new “golden age of grift.”

But while the means may be constantly changing, the human impulses that motivate con men and con women haven’t changed much. Whether they operate online or in person, con artists share a “dark triad,” as Konnikova calls it, of traits: psychopathy, narcissism, and Machiavellianism. They prey on the unrealized dreams of their targets, selling them the future they desire and secretly believe they deserve.

Konnikova makes it clear that while it may be easy to dismiss con artists as outliers who operate beyond the norms of society, the formula used by con artists bears some similarity to the one that drives much of automotive, beauty, and financial advertising. Take, for example, the recent interest by many companies in the power of storytelling to tap into the belief systems and values of their customers. Marketers construct elaborate psychological profiles to understand the unmet needs of their customers, and then craft narratives to influence their behavior.

To be sure, most companies are not full of psychopaths. But many companies employ their share of narcissists and Machiavellian princes. The author cites a study of 1,000 marketers, which found that 10 percent of them scored at the top of the range for narcissism — far above the average in the general population. As such, they were masters of manipulation and deception.

The author cites a study of 1,000 marketers, which found that 10 percent of them scored at the top of the range for narcissism.

“If confidence men operate outside the law,” says the linguist David W. Maurer, author of The Big Con, “it must be remembered that they are not much further outside than many of our pillars of society who go under names less sinister.” Indeed, the appeals of con men hinge on some of the very same concepts behind legitimate sales pitches: fear of scarcity, appeals to legitimacy, promises of future wealth or idealized love interests, and social consensus.

Of course, the slope from a legitimate business practice to a con can be a fast and slippery one. Many a corporate fraud begins with minor tweaks to the books — a few invoices that can be recognized as revenue now and, hopefully, be made up for later — only to have things spin out of control as the market tanks or a recession hits.

Konnikova reminds us that we are all vulnerable to fraud, and that, in some ways, we are all susceptible to using unsavory business tactics ourselves. Each of us lies, on average, three times during a normal conversation with an acquaintance, according to psychologist Robert S. Feldman. And, according to one study the author cites, almost one quarter of adults believe it is OK to falsely increase their insurance claim to make up for the deductible.

Facts like these and others in Konnikova’s intriguing book will make you sweat. You’ll end up wondering what your colleague in the next cubicle is up to, and whether there is truly a legitimate institution behind that website where you just logged your credit card number.

Still, by reading Konnikova’s book carefully, you can reverse engineer a few pieces of worthy advice. Don’t get too caught up in your emotions; instead, try to make sure you are observing and listening objectively as much if not more than simply feeling. Doing so could help keep you from getting swept up in the prospect of outsized and ever-increasing returns — or, say, from falling for the unlikely affection of a bikini model.

Also, check with others and then actually listen to them. One colleague of the physics professor, for example, told him blatantly that he was about to be scammed and dragged to prison for transporting drugs. Did he listen? No.

Finally, stand up at the front of your company and make it blatantly clear: We don’t cheat, lie, or steal here. Repeat this performance at the family dinner table. Then stick to it.

And remember the old adage: If it seems too good to be true, it probably is. 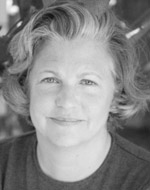 Nancy Nichols is a former senior editor of the Harvard Business Review and founder of the Great Ideas Studio.