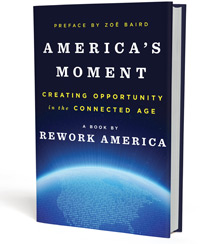 Self-help and public policy have long been popular genres in the book trade. But in this age of diminished expectations, aggressive external competitors, and widespread fear of robots taking everyone’s jobs, we’re seeing a new genre form: self-help for America.

The drumbeat of new campaign manifestos and techno-visionary guides to the future seems to have reached a crescendo in recent months. Whether it’s a road map to regaining U.S. military hegemony or a prescription for how to jump-start growth, everybody has an idea for turning the U.S. around.

Most of these books are written by individuals with an ax to grind or a brand to build, and that can limit their impact. But the latest entry into this crowded field is a group effort that eschews ideology for persuasive argument. America’s Moment: Creating Opportunity in the Connected Age was written by a collection of academics, tech executives, elected officials, and consultants convened by the Markle Foundation — Starbucks CEO Howard Schultz, for example, and U.S. Senator Cory Booker, along with Google executive Laszlo Bock and Liz Shuler, secretary-treasurer of the AFL-CIO. The book promises transformative solutions to the thorny problems that the United States faces today: “Prepare for the Life You Want,” reads one particularly self-helpy chapter title (it covers education reform). As is typical of manifestos born in the business world, the book positions itself as a post-partisan grab bag of ideas for pragmatists in power.

And a grab bag is exactly what it ends up delivering. Authorship by committee is never a great way to put together something that feels internally cohesive. But this book doesn’t need to work as a seamless whole in order for its elements to be useful. Its component parts — including pieces on building community wireless networks and changing how government research grants are allocated — could be advanced alone or as a group, by any number of different parties well equipped to take them on. Take heed, technocratic leaders: This checklist could keep you busy for a while.

America’s Moment begins with what is emerging as the consensus technocratic diagnosis of the problems of the digital era: The institutions that powered the U.S. through the 20th century — government, corporations, universities — are woefully inadequate for the society that emerged in the 21st. They’re hierarchical when the new world is networked; analog in a digital age; still preparing people for jobs that are rapidly disappearing rather than the ones that entrepreneurs are inventing. If the rolling industrial, economic, and technological revolutions we saw in the 20th century were “about our mighty structures,” the authors write, “this one is about the might of our combined talents, organized and deployed with unprecedented flexibility.”

Mercifully, the authors resist the favored techno-evangelist approach of declaring that none of those institutions matter anymore, now that ad hoc groups of people can get a project financed. Rather, they generally argue that those institutions can still play a role — if they use the leverage that technology offers to empower individuals rather than control them, as corporate structures of old did.

Take education. The explosion of online courseware has prompted some digital pioneers — such as PayPal cofounder Peter Thiel, who was not on the writing committee — to declare that formal higher education is no longer necessary. While embracing the now-mainstream view that four-year college degrees shouldn’t be considered the only route to a middle-class life, the book explains that instructional videos should be seen as a tool that helps teachers spend classroom time actually helping kids practice and internalize what they’re learning, rather than droning on from a lectern.

The authors celebrate the flexibility afforded by new “sharing economy” platforms, which allow people to earn money by working directly for individual clients, rather than through an employer. But they recognize the erosion of economic security that comes with it, and suggest ways in which the social safety net might adapt to make sure that people don’t lose the protections that used to come with traditional jobs. One proposal is creating more portable retirement plans, to match what the Affordable Care Act did for health insurance.

People who have spent a lot of time in what might be dubbed “the economic solutionism space” will recognize many of the other ideas, as well as the committee members they came from. The AFL-CIO has talked up apprenticeships and union training programs that help people upgrade their skills while working, rather than getting an expensive degree up front. Google has pushed for the use of shared spectrum to make better use of the airwaves for public use.

There’s a tendency in our debate to polarize issues: the 1 percent versus the rest; Wall Street versus Main Street; China versus the United States. Such stark contradictions, however, don’t always help us understand issues. And perhaps the book’s most important contribution is to note that there’s an artificial divide between the “old” industrial, goods-based economy and the “new” service-based economy. In fact, as one chapter notes, these two realms overlap in important ways. Manufacturing that relies on advanced technology, such as a “microfactory” that produces custom cars, is as knowledge-based as any Internet startup. The “Internet of Things” may be driven by software and apps, but it works only if powerful devices can be produced cheaply and effectively.

Manufacturing that relies on high technology, like a “microfactory” that produces custom cars, is as knowledge-based as any Internet startup.

America’s Moment, although quite comprehensive in its range of contributors, is a little light on economic populists who might have offered a more aggressive take on how to break down concentrated market power in industries such as financial services and industrial agriculture. But the book does manage to address some issues that the Thomas Piketty crowd might agree are problems — for example, the potential of reckless financial engineering to destroy value and the challenge of channeling cash away from unsustainable consumer spending and into businesses with growth potential.

With all its graphs and statistics, America’s Moment is probably too wonky for a mass audience. Nevertheless, because it is easily digestible, relentlessly nonpartisan, and straightforward, it may be pitched perfectly to the smaller readership of people who can actually put its contents into practice. And that’s the readership that may really matter. It may not be a hit at next summer’s political conventions, but Davos 2016 should eat it up.

Topics: training, authors, agriculture, retirement, startups
Get s+b's award-winning newsletter delivered to your inbox. Sign up No, thanks