Foolproof: Why Safety Can Be Dangerous and How Danger Makes Us Safe 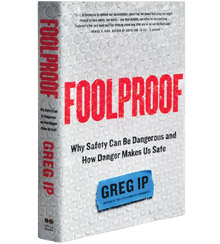 More than seven years after the onset of the worst financial crisis since the Great Depression, debate over its origins continues. The left blames deregulation or Wall Street greed. The right indicts government policies that promoted home ownership for those who couldn’t afford it. Regardless of your partisan slant, there were plenty of failures to go around.

But what if the epic face-plant of 2008 was the result of too much success, not too much failure?

That’s the argument made by Greg Ip, the Wall Street Journal’s chief economics commentator, in his thoughtful new book. In Foolproof: Why Safety Can Be Dangerous and How Danger Makes Us Safe, Ip says that the global financial system was ultimately the victim of its own success. Central bankers vanquished the inflation of the 1970s and the stock and currency panics of the 1980s and 1990s, and tamed the business cycle. Recessions, which used to occur every few years, appeared only once per decade. As a result, investors grew complacent. The era of steady growth and low volatility known as the Great Moderation, which had begun around the mid-1980s, created an “illusion of safety,” Ip writes, that enabled and encouraged increasingly risky financial engineering. The result: Trillions of dollars in wealth vaporized and the U.S. saw double-digit unemployment for the first time in more than 30 years.

“The most important factor,” Ip writes of the 2008 crisis, “was the sense of safety that resulted from years of successfully fighting crisis and recession.”

The novelty in Ip’s argument lies in the patterns he identifies beyond the world of finance. Just as efforts to make global markets safer spawned unintended negative consequences, so too have attempts to sand down life’s rougher edges: We get consequences such as runaway forest fires, nuclear meltdowns, and airplane crashes. Ip’s inspiration is U.S. economist Hyman Minsky, whose chief insight he summarizes as “stability is destabilizing.”

Ip posits a philosophical tug-of-war between “engineers,” who believe that complex systems can be mastered, and “ecologists,” who believe that such efforts inevitably lead to unintended and dangerous consequences. He doesn’t say so, but the former approach is emblematic of the human-over-nature approach embraced by contemporary Chinese leaders who have gambled China’s stability on their ability to divert water to drought-ridden areas via thousand-mile canals.

Foolproof appears at an opportune moment. The 21st century thus far has offered those in the U.S. a crash course in the costly trade-offs between safety and risk: the 2001 terrorist attacks; the invasion of Iraq less than two years later; 2005’s Hurricane Katrina; and the financial panic of 2008.

Ip’s writing ranges widely, displaying his command of the finer points of the financial system, aviation, flood control, and health. If the retelling of the recent crisis seems familiar, there is plenty of fresh material in his account of an ill-fated National Park Service attempt several years earlier to clear accumulated brush outside Los Alamos, N.M., with a “prescribed burn.” A fire intended to be confined to a 900-acre parcel instead exploded across 48,000 acres, consuming 200 homes and requiring 1,400 firefighters and 16 aircraft to contain it.

Ip also favors the reader with morsels of random wisdom: a meditation on the rationale behind the equity risk premium; the observation that the tsar’s embrace of the gold standard helped trigger the Russian Revolution; and a comparative assessment of the death toll caused by consumption of coal, oil, and nuclear power. (Spoiler alert: Nukes come away looking pretty good.) And there is the occasional memorable phrase: Nassim Nicholas Taleb, author of The Black Swan, explains the credit default swaps market by comparing it to “having to buy insurance on the Titanic from someone on the Titanic.”

Yet the tale inevitably begins to feel repetitive as the safeguard-and-risk pattern is elaborated upon again and again. Ip is a steady, sober guide to the trade-offs at issue. But he sometimes seems to wrestle with a straw man. In practice, no one really thinks it’s possible to attain the sort of belt-and-suspenders perfection he concludes is unattainable, whether in global finance or in nature. He’s also better at identifying vulnerabilities that could trigger the next crisis — including developing countries’ accumulation of excess foreign currency reserves — than he is at suggesting remedies.

Early in the book, he sets as his aim determining “whether we can ever get the balance between safety and risk right.” Ip discovers no magic formula. It’s not a choice between indiscriminate crisis fighting and laissez-faire, he argues. Rather, people should embrace the best of both philosophies. But who draws the line? And where, and how? Ip says “the right tradeoff between risk and stability will maximize the units of innovation we get per unit of instability.” Good luck measuring either the numerator or denominator of that equation.

Such complexity apparently leaves Ip untroubled, as does the inevitability of failure. The occasional financial crisis that obliterates trillions of dollars in wealth is the price we pay for a system that rewards innovation and thus eventually leads to a higher standard of living, he writes. Likewise, periodic natural disasters, however tragic, are the handmaiden of the human desire to live in desirable places — for example, on coastlines.

Ip settles on “space” as his preferred palliative. Space between combustible forests and high-priced homes. Space (expressed in terms of capital buffers) between a bank’s risky assets and its balance sheet. Space between the rising waters and human settlements. He doesn’t say so directly, but what Ip really offers as an antidote to hubris is greater humility.

That’s sensible enough, but as an ultimate verdict it is a rather damp squib. As Ip concludes: “We can make disaster and crisis less frequent and more survivable, but we won’t end either.”