Hall of Mirrors: The Great Depression, the Great Recession, and the Uses — and Misuses — of History 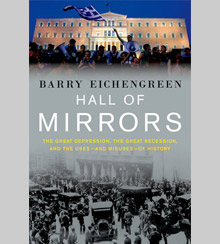 Everybody has an explanation for the crisis that began quietly when Ownit Mortgage Solutions shut its doors in December 2006 and that, thanks to Greece, is still with us in 2015. The list of culprits is endless: easy money, reckless lending by Ownit and its many peers, feckless rating agencies that allowed banks to mint AAA securities from junky loans, banks levered to the hilt, clueless bank supervisors and regulators, investors blind to risk, U.S. policies aimed at turning the working poor into homeowners, defective risk models, and many others. And we can’t forget the ultimate cause most frequently cited in the media: unscrupulous bankers.

Each alleged cause has its partisans, and most of the purported causes have some truth. Yet none of them adequately connects subprime mortgage loans in Phoenix and Philadelphia with bank failures in Madrid and Munich, the bankruptcies of Chrysler and General Motors, and Ireland’s sudden transformation from beacon to basket case. When Queen Elizabeth asked British economists in November 2008, “Why did nobody notice it?” she was not referring to the dodgy lending, which had been noticed far and wide. Rather, the original QE2 was referring to the interconnections that transformed a provincial banking problem into a global economic crisis. The best answer the experts could come up with, after eight months of debate, was that there had been “a failure of the collective imagination of many bright people.”

Of the scores of books that have examined aspects of this never-ending crisis, none may be better than Barry Eichengreen’s Hall of Mirrors. Eichengreen, who teaches at the University of California at Berkeley, is one of the most prolific economic historians writing today. He is also among the most astute. The author of books on the gold standard, European unification, and the international monetary system, Eichengreen approaches his subject from a thoroughly international perspective, detailing how the crisis spread and showing how containment efforts stumbled on the mismatch between a highly integrated global financial system and a regulatory system dominated by national political concerns.

Hall of Mirrors is constructed as comparative history, as Eichengreen artfully alternates between discussions of the Great Depression of the 1930s and the near-depression of the 2000s. The 1920s, he recalls, was a decade of financial innovation in the United States. Investment clubs pulled small investors into the stock market for the first time while banks and insurance companies stuffed their portfolios with newfangled mortgage-backed securities. Weak economic conditions in Europe sent gold flooding into the United States, where it drove stock prices into the stratosphere. Longtime Federal Reserve governor Adolf Miller described the situation as “optimism gone wild and cupidity gone drunk.”

The Fed, at the time an institution in its adolescent years, wanted to pop the bubble without hobbling the economy. Instead of raising interest rates, in 1929 it employed “direct pressure,” leaning on banks to stop lending to stockbrokers. The modern Fed could have learned from this, Eichengreen says, as an example of regulators trying to shape an intervention that addressed the problem without crippling the economy. They also could have learned that interventions focused on the banking system may not be effective if nonbank lenders such as insurance companies, stockbrokers, and investment trusts, none of which were subjected to Fed control, step into the breach. When that occurred in 1929, the Fed finally raised interest rates to calm the frothy market — with devastating consequences.

The decade of the 2000s, of course, saw its share of financial innovations, with mortgage brokers reprising the role of the “binder men” who, in the 1920s, signed up rubes to buy Florida real estate sight unseen. Sophisticated investors, not least supposedly conservative European banks, willingly purchased collateralized mortgage obligations and CCC-rated bonds in an almost desperate search for higher returns. And, now as then, dodgy accounting made it seem that banks were far better capitalized than they really were, in both Europe and the United States. “This buildup of vulnerabilities bore more than a passing resemblance to the 1920s,” Eichengreen writes.

But few noticed the historical echoes. Which is strange, considering several of the leading actors in this modern drama are themselves economic historians. Ben Bernanke, chairman of the Federal Reserve Board from 2006 to 2014, and Christina Romer, chair of Barack Obama’s Council of Economic Advisers in 2009 and 2010, both wrote books on the Great Depression. Yet as Eichengreen points out, these experts, their colleagues in central banking, and their ultimate political overseers took a bad problem and made it much worse, in large part by drawing the wrong lessons from history.

Experts took a bad problem and made it much worse, in large part by drawing the wrong lessons from history.

One example: Many experts, including Fed officials, worried openly that foreign investors in China and the Middle East might lose their willingness to buy U.S. bonds, potentially causing chaos. This focus on net capital flows was presumably a relic of the days of the gold standard, when a country with a persistent balance-of-payments deficit might eventually run out of gold. Meanwhile, nobody seemed to notice that European holdings in the United States had shifted massively into mortgage-backed securities — and it was that unnoticed shift that ultimately brought the European banking system to its knees.

Eichengreen saves his most pointed words for those obsessed with another lesson of history — that inflation lurks behind the nearest tree. Inflation was certainly a problem in Europe in the 1920s and worldwide in the 1970s. But in the 21st century, in good times and bad, it has been consistently low, and sometimes negative, in North America, Europe, and Japan. Yet central banks and leading politicians in many countries hesitated to stimulate their crisis-wracked economies, either with rock-bottom interest rates or with government spending, lest doing so resurrect dreaded inflation. Eichengreen argues passionately that economic policy should have been far more aggressive. “The implication is not that the disappointing recovery following the 2008–09 financial crisis was inevitable,” he writes. “The presence of unemployed resources in the wake of a crisis means there is space for the economy to bounce back even more vigorously than from the typical recession.”

With any luck, policymakers will be able to draw on that lesson the next time a crisis rolls around. They could do worse than asking Eichengreen for advice.