The Only Game in Town: Central Banks, Instability, and Avoiding the Next Collapse 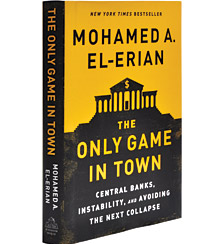 One of the more peculiar features of the past decade has been the transformation of a formerly quiet, behind-the-scenes cohort of central bankers into the most visible and consequential players in shaping the arc of the global economy.

Central banks’ star turn has sparked considerable controversy in many parts of the world. But as Mohamed El-Erian demonstrates in his deeply informed new book, The Only Game in Town, it is a role that cannot long be sustained and is likely coming to an end. To El-Erian’s credit, and to the frustration of those looking for simple answers, the author lays out a future path that is neither clear nor certain. We are headed, says El-Erian, to a turning point — a T-junction. Some countries will find a glide path toward greater self-sustaining prosperity free of aggressive central bank intervention; others will find themselves more deeply mired in sclerosis and crisis.

El-Erian repeatedly emphasizes that “the time has come for governments to recognize that they can no longer rely on central banks to do the heavy policy lifting.” After all, central banks did their job heroically and prevented the 2008–09 global crisis from transmogrifying into a global meltdown. They have spent the past seven years taking extraordinary and unconventional measures such as quantitative easing and negative interest rates, all in an attempt to bolster the world’s financial system and spur economic activity. The record charted by El-Erian has been mixed, largely because elected officials and governments in most countries have remained passive, fragmented, or misguided.

It would be hard to find a better guide to this perplexing landscape than El-Erian, an Oxford Ph.D. who has run some of the most prominent institutional investing organizations in the world (those of Harvard and PIMCO) and who is a frequent commentator and analyst. He tackles complex issues with a sharp focus, and provides not just an overview of how central banks worldwide have navigated the past decade, but also a road map of the current challenges and better processes for moving forward. While eschewing the temptation to provide a simple prediction for what lies ahead, he does explain what he sees as most likely (that T-junction) and suggests policy prescriptions for central banks and governments going forward.

El-Erian is surely right that for a set of institutions that have shaped the cost of capital for companies, the price of mortgages for consumers, and the supply of money for countries, central banks remain ill understood. In part that is because of their own legacy of what former Federal Reserve chairman Alan Greenspan called “purposeful obfuscation,” that tendency of central bankers to stay out of the spotlight and when placed in it to do their best to just mumble incoherently.

The rolling economic and financial crises of the past decade have thrust bankers to the forefront of global economic policymaking. Faced with governments that have been unable or unwilling to do the hard spadework of structural reform, central banks became “the only game in town,” El-Erian writes. And although they may have done their job admirably and at times even heroically, they have, he concludes, reached the borders of what they can do with the still limited tools of monetary and regulatory policy that are at their disposal.

El-Erian is a perfect Virgil for our collective Dante as he leads us through a tour of the purgatory of the global economy; however, he can wander off into too many tangents. These tangents are in themselves illuminating, but they dissipate the force of the book. The latter sections on diversity and the need for both gender and intellectual diversity are compelling, yet they feel as though they belong to a different work.

Nonetheless, it’s hard to quibble with the author’s central thesis. Yes, between negative interest rates in Japan and parts of Europe and continued bond buying and easing by a European Central Bank deeply concerned about deflation, we are not at the end of central bank interventions. As El-Erian hammers home, however, governments need to take up the baton of structural reform. Companies must also begin to take more risks with their massive cash reserves, and financial system participants should take fewer risks. Here, too, less action on the part of central banks could be a spur to both those needed changes.

Companies must begin to take more risks with their massive cash reserves, and financial system participants should take fewer risks.

The outlook for government action is decidedly mixed. Although governments such as China’s can change gears and attempt to address structural issues of slower growth and rising wages, even their skills are being tested and perhaps found wanting. Few of the democratic governments in Europe, North America, and Latin America seem capable of enacting the type of long-term reforms that the moment demands. The U.S. remains in many ways paralyzed by gridlock. And the European Union has never fully embraced a unitary fiscal and economic policy.

While temperamentally optimistic, El-Erian soberly notes that there is no easy path out of the low growth, high unemployment, and rising inequality that besets much of the world. The populist stirrings throughout the world, as reflected in the candidacies of Donald Trump and Bernie Sanders in the United States and as felt through a familiar list of protests in societies worldwide, have yet to grow into governance.

As he focuses on the limitations of central banks, El-Erian omits a key point. While inequality has been rising along with growth stagnation, the costs of living have been plunging everywhere, including the costs of food, energy, and other everyday needs and desires. Surely that has bolstered living standards far beyond our ability to easily measure. Those changes, which can be ascribed in greater part to technology than to the actions of central banks, are reshaping our economic realities more rapidly than we can analyze or understand. Central banks may be the only game in the town of global economic policy. But they are only one factor in the immensely complicated lattice of forces that are reshaping the world as we know it.