America’s Bank: The Epic Struggle to Create the Federal Reserve 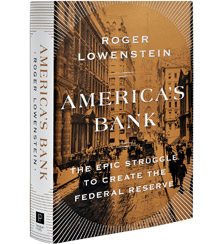 Sometimes, it’s useful to read history for the pure entertainment of it — riveting stories of battlefield adventure, for example. Other times, we read history to understand more about the people who shaped the future of the world. But a small, satisfying subset of history books can also shed light on current events. They shrewdly point out that phenomena that may seem to be entirely products of our time are in fact just the latest iterations of debates that echo through decades and centuries.

America’s Bank: The Epic Struggle to Create the Federal Reserve, by Roger Lowenstein, falls into this last category. It is, narrowly speaking, a book about the early 20th century fight over the creation of what would become the Federal Reserve. A journalist by training whose previous books have focused on more contemporary history (Warren Buffett, the 2008 financial crisis), Lowenstein exhibits a gift for making these old debates come alive. But broadly speaking, America’s Bank is a book about the same ideological clashes that shaped the response to the most recent financial crisis and the Fed’s subsequent era of activism. And because Lowenstein manages both technical precision in describing financial concepts and clean, accessible storytelling, the result is a compelling reminder of how much today’s battles over who should control banking owe to the past.

Over the last few years, the Fed has played a more intensive role in managing the United States’ economy and financial system than ever before. Whether you view its aggressive policy actions as having saved the economy or having been a disastrous usurpation of democratic traditions and their own powers (or both), America’s Bank will help you understand how this institution came to be, why it has the Byzantine structure it does, and why its role in the 2008 crisis — and our continued angst over that — has long roots in American history.

Even if Lowenstein does not explicitly say so, America’s Bank is also the story of how the United States laid the institutional groundwork for its 20th-century dominance over the global economy and financial system. At the start of that century, London was the unquestioned financial center of the world. And although two world wars that ravaged Europe did much to shift that role to New York, it couldn’t have happened without the events described in America’s Bank.

It is easy to forget given all the mistakes the Fed has made over the years, particularly during the Great Depression, but before the creation of the country’s central bank, the United States’ banking system was in many ways a disaster. Each bank was more or less on its own in avoiding a crisis of confidence. In one memorable metaphor Lowenstein quotes, it was as if the U.S. was a “town without a fire department in which each family maintained a pail of water to quench blazes in its own house.”

Lowenstein makes clear just how dysfunctional the system was. The mere turn of the seasons could cause a freeze-up in credit. Economic depressions were a routine fact of life in the 19th century, not a rare aberration. American companies looking to trade globally had to rely on London banks because their counterparts on Wall Street weren’t allowed to do business internationally.

Economic depressions were a routine fact of life in the 19th century, not a rare aberration.

European powers had vanquished banking crises generations earlier by establishing government-chartered central banks, which anchored financial systems and prevented crises by issuing credit when needed. But U.S. residents were deeply opposed to a central bank, a cleavage that dated to the earliest days of the republic and the battles between Alexander Hamilton and Thomas Jefferson over centralized financial control.

The ghost of President Andrew Jackson, who slayed the Second Bank of the United States in 1836, haunts the era that Lowenstein chronicles, which starts roughly with the Panic of 1907 and ends with the passage of the Federal Reserve Act on Christmas Eve 1913. Time and again, officials who proposed a central bank took great pains to explain that what they had in mind wasn’t really a government-controlled “central bank” like the ones that existed in Europe.

Lowenstein draws a set of characters vividly enough that you can imagine them walking through the contemporary political scene. These include Senator Nelson Aldrich, the powerful Rhode Island politician who was the ultimate crony capitalist; Senator Carter Glass, a wily Virginia segregationist who started with little knowledge of finance but would leave a vast imprint on the country’s market system (besides the Federal Reserve Act, he coauthored the Depression-era Glass–Steagall Act); and Paul Warburg, a German-born banker who was alternately impressed and appalled by the ways of his new homeland. Not only was the United States’ system of banking regulation worse than that of Europe, “[Warburg] said, it suffered in comparison with that of the ancient Babylonians,” Lowenstein writes.

Conspiracy theorists have fixated on a key episode in 1910, when Aldrich, Warburg, and others snuck off to Jekyll Island, Ga., to design what would become the Federal Reserve System. On the one hand, it really was a secretive conspiracy among bankers and politicians. On the other hand, the Jekyll Island crew successfully found a way to balance the competing interests of Wall Street, country banks, business, agriculture, and political leadership, while also creating an effective central bank.

As America’s Bank moves to the legislative debate over the Federal Reserve Act, it becomes a tale of how to balance these competing interests. It is here where the echoes of our current time are loudest. For example, smaller banks and progressives both distrusted Wall Street power. Smaller banks wanted greater control vested in reserve banks around the country, which would be stocked with local leadership (think of the Kansas City Fed and its counterparts). Progressives advocated greater control in a Washington-based board connected to the executive branch, and that became the current Fed board of governors. Wall Street interests wanted more power vested within a local branch that would be solicitous of their needs, and that became the New York Fed.

The same dynamic was evident during the debate over the Dodd–Frank Act in 2010 and during the ongoing discussion of financial regulation. Tea Party Republicans, populist Democrats, and community banking interests share a distaste for Wall Street power, but often have different recipes for what to do about it. The legacy of those debates is the bizarrely complicated structure of the Fed system itself, with authority shared across a dozen reserve banks, each with its own board of directors, and overseen by the presidentially appointed board of governors in Washington.

“The past is never dead,” William Faulkner famously wrote. “It’s not even past.” As Lowenstein reminds us, 100 years after the creation of the Federal Reserve, the U.S. still hasn’t fully made peace with the idea of a central bank.