Trillion Dollar Triage: How Jay Powell and the Fed Battled a President and a Pandemic—and Prevented Economic Disaster 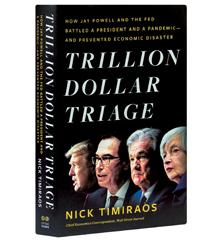 The first thing people know about Jay Powell is that he is the chair of the US Federal Reserve. The second is that he is not an economist. After Powell joined the Fed, he complained to a colleague: “They talk to me like I’m a golden retriever.” Despite his professorial appearance, the former corporate lawyer was conspicuous in a building full of economics Ph.D.s. Yet Powell’s plainspoken manner and evidence-based approach meant that within a decade he was at the helm of the biggest central bank in the world, as the global economy faced its stiffest challenge in generations. Powell’s leadership during the acute phase of the COVID-19 pandemic helped to prevent a financial meltdown, but how did the appointment of an outsider change the most important institution in economics?

After he was tapped for the chairman role by Donald Trump in early 2018, Powell sought to challenge the notion that central banks are designed to be sober, slow-moving institutions that absorb huge amounts of information to make small and gradual tweaks to economic policy. “Building up the Fed’s brand and making the institution a paragon of diligent, apolitical analysis struck Powell as something he might be uniquely equipped to accomplish,” writes Nick Timiraos, chief economics correspondent of the Wall Street Journal, in his new book on Powell’s Fed, Trillion Dollar Triage. He wanted the Fed to continue to talk more and in language that everyone understood. He also sought to investigate if the Fed was delivering a strong economy for ordinary Americans. To do this, he settled on a nationwide tour, dubbed “Fed Listens.”

What Powell heard was that the Fed was paying too much attention to inflation and too little to unemployment. That realization, coupled with the fact that globalization had changed the economy so that it was capable of tolerating much lower unemployment without stoking inflation, drove Powell to resolve that the inflation target should be made truly symmetrical: if inflation had been allowed to run below 2% for a period, it should also be allowed to exceed it for a similar duration. He shared a draft of his new framework with colleagues in January 2020. Then the pandemic hit.

The Fed was alert to the seriousness of the pandemic faster than the administration or Congress. According to Timiraos, it faced two daunting challenges. The first, making it as easy as possible for households and firms to borrow and repay debt, was the more straightforward. Powell used former Fed chair Ben Bernanke’s playbook of cutting rates to zero and embarking upon a turbocharged version of quantitative easing. The second, and more complicated, challenge was ensuring the continued flow of money around the global financial system as the market for US Treasuries seized up. This was a problem that the Fed grappled with continually in the spring of 2020. It dragged the bank further and further into new territory. Each time Powell and his colleagues considered expanding its reach, into buying corporate bonds, municipal debt, or exchange-traded fund securities, they asked themselves variations of the same question: were they prepared to do all they could to reduce the chance of a short-term disaster without knowing the long-term consequences? And each time, they decided that they were.

Powell’s willingness to conduct a “full-court press on the market,” in the words of one analyst, meant that confidence in the economy was restored relatively quickly. Consequently, several of the Fed’s most unorthodox measures were used sparingly. Timiraos argues that Powell practiced a key tenet of crisis management: by showing a willingness to do more, he ended up having to do less. The approach also enabled a faster economic recovery than many had expected. However, this rapid recovery unwittingly dragged Powell’s two major changes at the Fed—its reprioritization of unemployment against inflation and the size of its pandemic response—into conflict.

That the Fed quickly understood the ruinous potential of the pandemic meant that it assumed a bigger and bigger role in combating it.

At the time of the Fed Listens tour, the central bank had spent a decade trying to push inflation up. Powell was worried inflationary expectations would become stuck at a permanently low level, echoing Japan’s “lost decades.” Holding interest rates lower for longer to focus on driving down unemployment seemed a low-risk strategy. But the Fed did not reckon on pandemic-related supply problems sending inflation soaring. When inflation began to accelerate in mid-2021, Powell repeatedly described it as “transitory” and focused on the need to repair the jobs market. According to Timiraos, “the Fed’s new framework…effectively committed officials to react too late.” By the start of 2022, the labor market was strengthening rapidly, but inflation was at its highest point in 40 years. Had Powell’s Fed overdone it or merely been unfortunate?

Timiraos’s conclusion, that the Fed has been asked to do too much, feels like the right one. Long known as the lender of last resort, at the height of the pandemic it became “the backup lender to the entire world.” During the Powell era, it has also stepped in to try to reduce both unemployment and inequality in the US. That the Fed quickly understood the ruinous potential of the pandemic meant that it assumed a bigger and bigger role in combating it, at the same time that it also tried to correct its errors of the past. Its monetary stimulus collided with a belated and enormous wave of government spending.

Here, a counterfactual might be helpful. What would have happened whether the Fed had not pulled every lever it could reach? Powell’s gamble of a lifetime was that the US would be dealing with a worse outcome than an uncomfortable spike in the cost of living. A yearslong depression was avoided. So too was a permanent slump in inflationary expectations. Timiraos’s sympathetic study gives Powell plenty of credit for his short-term crisis management. But the long-term challenge, that of fixing the system that led to such reliance on the Fed, awaits.