Call them the New Blues — emerging blue-chip com­panies from developing markets such as Brazil, Russia, India, and China that can compete on the same level in mergers and ac­quisitions with the largest and most powerful corporations in the West. These freshly minted contenders, along with a spate of government-run investment funds in developing nations, are driving an unprece­dented worldwide deal-making spree in­volving the buying and selling of topnotch R&D, marketing, and brands.

The New Blues are succeeding thanks to thriving home economies and burgeoning global consumer markets; indeed, their achievements are helping to create and reinforce these conditions, and are inspiring greater ambition and more lofty aspirations among the people and the governments in these emerging nations. Many New Blues started as low-cost contract manufacturers or outsourcers, but are no longer content with that role; they want to create more profitable products for their domestic markets and for de­veloped countries as well.

Witness China: In September 2007, thanks to a massive run-up in its stock exchange, China was home to three of the world’s largest companies by market capitalization. One of them, the Industrial and Commercial Bank of China Ltd. (ICBC), overtook Citigroup Inc. as the number one financial-services company, measured by market cap. Quite an accomplishment, considering that less than a decade ago China had no capital markets.

With all of the new money flooding China, the nation’s businesses have earmarked a growing portion for mergers and acquisitions, many of them outside the country. In 2007, for the first time, Chinese companies spent more money on cross-border deals (about US$24.2 billion in announced transactions) than foreign firms spent acquiring companies in China (about $22 billion).

China is anything but an aberration among emerging economies. In 1990, only 19 companies from developing countries were listed in the Global Fortune 500, a list that naturally includes many of the most active acquirers in the world; in 2007, the figure had risen to 74. And between 1993 and 2005, the total number of multinational companies whose parents were based in Brazil, China, Hong Kong, India, or the Republic of Korea grew almost fivefold, from fewer than 2,700 to more than 14,800, according to the 2006 World Investment Report by the United Nations Conference on Trade and Development.

The New Blues are remaking their industries through domestic and regional acquisitions and by setting their sights on developed markets. The Saudi Basic Industries Corporation (SABIC), for instance, paid $11.6 billion for GE Plastics in 2007, and in early 2008, Tata Motors Ltd. purchased the storied Jaguar and Land Rover brands from Ford Motor Company for $2.3 billion. Tata said that Ford will continue to supply engines, transmissions, and other components for the next five to nine years, turning one of the Detroit Three into an outsourcer for an Indian automaker.

And consider personal computers, an industry long controlled by U.S. firms. Three Asian companies are now among the top five manufacturers of PCs. In 2004, China’s Lenovo Group Ltd. ponied up $1.75 billion for IBM’s PC division, which made Lenovo the fourth-largest PC maker in the world. Lenovo dominates the Chinese market, where PC sales are rising four times as fast as in the U.S. Three years later, Taiwanese PC maker Acer Inc. leapfrogged Lenovo into third place worldwide by ac­quiring Gateway for $710 million. That deal gave Acer a stronger presence in the U.S., and now the company is targeting Europe through a 2008 $49 million buyout of Netherlands-based Packard Bell. The Toshiba Corporation, the third Asian company in the top five, has been a prominent worldwide PC maker for many years.

With each deal, the New Blues alter the economic calculus in their home nations, creating a positive feedback loop as they aggressively seek out cross-border transactions. The success of local companies strengthens regional economies, creates more high-quality jobs, and enables more people to take advantage of improvements in living standards. In turn, these new consumers juice local demand for goods from the growing domestic companies. Finally, successful global deals, by easing access to capital and forcing government authorities to adopt legal systems and financial reporting requirements that conform to international standards, create an environment in which other companies from emerging nations can more easily follow suit.

The rise of the New Blues as M&A competitors is particularly intriguing, because their fortunes, although still fundamentally linked to the West, no longer rise and fall in lockstep with Western companies. Thus, New Blues can be on the prowl for acquisitions even when Western companies cannot.

Consider how buyers in Asia and the Middle East reacted to the subprime mortgage debacle that began to swamp financial institutions in the U.S. and Europe in 2007. As Western institutions, which held billions of dollars of collateralized debt obligations on their books, rushed to raise capital, in­vestors in Asia and the Middle East sensed a bargain and stepped in. The China Investment Corporation invested $5 billion in Morgan Stanley; the Abu Dhabi Investment Authority shoveled $7.5 billion into Citigroup; China’s Citic Securities Company agreed to prop up Bear Stearns with $1 billion (before the U.S. firm’s sudden demise); and the Government of Singapore Investment Corporation announced a $9.75 billion investment in UBS. All this made 2007 a watershed year, according to the Wall Street Journal. It was the first time deal makers in developing nations acquired about as many assets in the West as deal makers in the West acquired in developing markets.

As these transactions suggest, strategic buyers are not the only competitors from developing na­tions flexing their M&A muscle; the New York Times has reported that increasingly aggressive government investment funds, or the so-called sovereign buyers, currently control about $2 trillion worldwide and are expected to have more than $12 trillion at their disposal in 2015. The lion’s share of this money is in the Middle East, where record oil prices have filled the coffers of sovereign buyers with about $1.5 trillion in assets; their thirst for deals corresponds directly to the world’s thirst for their oil. By the third quarter of 2007, the sovereign funds of Kuwait, Saudi Arabia, Dubai, Abu Dhabi, and Qatar had spent $64 billion globally, compared to $30.8 billion in all of 2006 and $4.5 billion in 2004, according to the Wall Street Journal.

Sovereign buyers have been losing interest in staid bonds and even private equity funds. Rather, they are purchasing companies directly. Since 2005, government-owned Dubai Ports World of the United Arab Emirates has bought Peninsular & Oriental Steam Navigation Company of London; a Dubai state-owned fund has acquired the Tussauds Group; and Kingdom Holding Company of Saudi Arabia (and Bill Gates) have secured the Four Seasons Hotels chain. And then there was the deal in 2007 that could be described as the first global M&A struggle, pitting British bank Barclays against a consortium of the Royal Bank of Scotland, Benelux’s Fortis, and Spain’s Banco Santander for Dutch financial-services giant ABN Amro. Although the Barclays bid was ultimately unsuccessful after months of behind-the-scenes ma­neuvers and public posturing, it was notable for the involvement of several sovereign funds. Among them: the China Development Bank, which said it would invest at least €2.2 billion (US$3.4 billion) and as much as €9.8 billion ($15.2 ­billion) and Singapore’s Temasek Holdings, which pledged as much as €3.6 billion ($5.6 billion).

Although these government funds will continue for some time to invest the bulk of their cash in the West, where most of the world’s economic activity still takes place, sovereign investors are also eyeing the East. Dubai International Capital LLC had sunk more than $1 billion into Asia by late 2007 and announced plans to invest an additional $2.5 billion in India and China — particularly targeting manufacturing, real estate, and finance. It has taken a large stake in the Bank of China and Bank Islam Malaysia Berhad; in India, it’s in­vested in the real estate developer DLF Ltd. and travel agent and currency exchanger Thomas Cook. Temasek Holdings and the Government of Singapore Investment Corporation announced they would double their combined stake in India’s ICICI Bank Ltd.

The rise of the New Blues and the heightened activity of sovereign funds create several challenges for established M&A players. For one, there is more competition for targets in the developed nations, as the former hunters increasingly become the prey. And perhaps more im­portant, these changes signify that there will be a larger number of experienced and well-heeled competitors in developing nations, some of which boast the world’s fastest-growing economies and capital markets. In other words, the once clubby, distinctly Western M&A environment could get quite a bit more daunting in the next few years, giving longtime corporate buyers a real case of the blues. 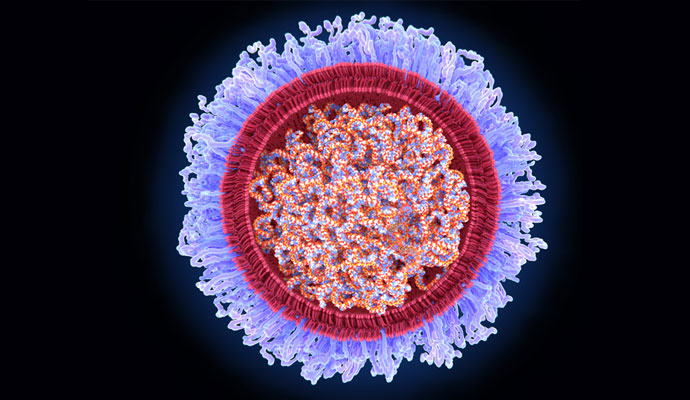 The little molecule that could
A new book celebrates the story of mRNA and the triumph of the COVID-19 vaccines.
by Bethany McLean
Digital issue