About 25 miles north of Atlanta, Ga., in a suburban village named Alpharetta, is an innovative private workspace club called Roam Atlanta. If you join, you can claim a desk, book conference rooms, share office equipment and services, and buy food from the café. But the main attraction might be the informal, sociable atmosphere. Cofounder Brian Kramer deliberately configured the space that way. Having worked for 11 years at IBM in home-office isolation, he was drawn to the idea of a more welcoming, community-oriented workspace. 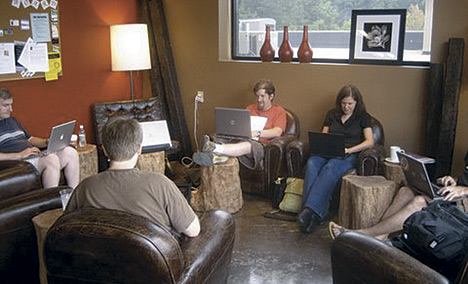 The Roam Atlanta facility has several dozen members, most living within a six-mile (10-kilometer) radius. They include corporate employees, freelance entrepreneurs, and small-business proprietors. They may have come to the space originally for the desk or the high-quality telecommunications and shared clerical services, but they keep coming back for one another’s company — despite, and sometimes because of, the fact that they work for different employers.

Indeed, one group of regulars, the “Atlanta Jelly community,” work mostly at home, but convene at Roam to work alongside one another on Wednesdays. (The word jelly has become a generic name for such weekly gatherings of freelancers, named after the jellybeans that the convenors of the first one, in New York, were eating when they thought of the idea.) The Atlanta Jellies include another Brian from IBM — Brian Jones, a programmer assigned to a work group in Vermont, who kept his job, thanks to IBM’s flexible work policies, when he followed his wife to Atlanta after she enrolled in graduate school there. (Indeed, about 40 percent of the company’s employees have no fixed office space; it saves around US$100 million per year in real estate costs. IBMers used to joke that the company letters stood for “I’ve Been Moved”; now they’re more likely to say they stand for “I’m By Myself.”) Roam and Jelly bring Jones something he can’t get within his home office: regular face-to-face contact with other professionals and colleagues.

A Field Guide to Co-working

Roam provides a space for what is called “co-working.” A co-working facility is an open office environment shared by multiple freelancers and companies. Often much less expensive to rent and maintain than traditional office space (because of the flexibility), and closer to participants’ homes, co-working spaces are still in their infancy. There are only about 70 such locations in the world, sprinkled throughout the U.S., Europe, Asia, and Latin America. But their potential contribution is greater than these numbers might suggest. Just as cloud computing represents a more nimble and spontaneous, multi-sourced data environment that may augur the next new thing in technology, sites like Roam are the seeds of a less restrained and possibly more creative “cloud office” environment of the future.

Co-working provides a single solution to multiple organizational problems: the space demands of flexible, multi-geographical workforces; the costs of permanent offices; the potential inconvenience of working at home (especially for employees with children); the inexperience that many employees have with alliances and joint ventures (which are natural outgrowths of shared space); the carbon footprint inherent in a commuting population; and the sheer waste of time, resources, human capability, and energy spent moving people back and forth across a metropolitan area, only to have them on the phone or reading e-mail most of the day.

For example, at the Hat Factory, a co-working space in San Francisco, two of the tenants are programmers working for Intalio, a business process management software company based 50 miles (80 kilometers) away in Palo Alto. These programmers commute to the Palo Alto office only a couple of days per week. They say their supervisor approves of the arrangement because they accomplish more work on their Hat Factory days than on days when they spend two and a half hours in the car.

Co-working spaces attract young, resourceful employees. The spaces fill up rapidly with people in their 20s and 30s, often those employed in technological fields (Web development, graphic design, social media, videography, blogging) or as writers, attorneys, or management consultants. Rather than cubicles or closed-off rooms, the work spaces tend to favor open desk arrangements that encourage cross-communication and collaboration. In some spaces, workers nest in preferred corners; in others, they switch locations, views, and office mates regularly.

A couple of co-working spaces were set up as experiments in reshaping corporate climates. For example, the Steelcase furniture company opened Workspring in Chicago, which it describes as “a network of extraordinary spaces, designed to inspire and support creative collaboration, productive retreat, and transformative exchange.” The company applies the insights gleaned from space renters to its own next-generation furniture designs. “The trend [in facilities] is for corporations to reduce their fixed real estate costs,” says Steelcase Senior Vice President Mark Greiner, the general manager of Workspring, explaining the reasoning behind this venture. “I was seeing a shift toward elements that weren’t necessarily playing toward our strengths.” 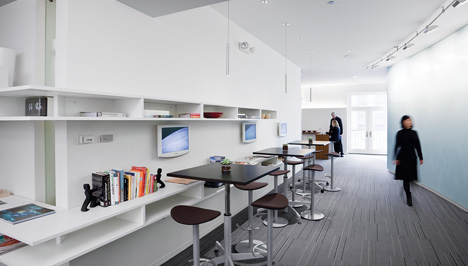 Steelcase set up the Workspring facility in Chicago to gain new insights.

A few other companies are embracing co-working. Stonyfield Farm, an organic dairy producer based in New Hampshire, rents space for its West Coast sales staff at Sandbox Suites in San Francisco. A northern California software company called Automattic has sales and programming employees at a space called Conjunctured in Austin, Tex., where they co-work alongside some of their customers. The biggest obstacle to setting up such spaces is often not financial or logistical, but cultural. When Macquarie Bank in Sydney tried to convert some offices to more flexible spaces (even inviting other companies to come in and co-work), some older, established managers protested; they did not want to give up their private offices. Rather than welcoming collaboration, some employees fear distraction and instability. Some also worry that co-working could make it easier to inadvertently reveal company secrets to outsiders.

But space is culture, and the informality and openness of co-working could be valuable to many companies — for fostering innovation, attracting talent, and funding facilities in a more flexible manner. Co-working is often cheaper and less disruptive than equipping a telecommuting employee’s home with high-speed Internet and phone service. It might thus represent the future of many corporate workplaces. Companies may turn to co-working because it is relatively inexpensive, and then stick with it because of its other advantages, including the benefits of learning to experiment with parts of the business, such as facilities, that have resisted experimentation to date.