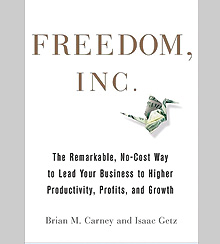 Empowerment has been a buzzword for years, but company leaders still try to achieve productivity improvements at the expense of their people. In this story about Bill Gore, the founder of W.L. Gore & Associates Inc., Brian M. Carney and Isaac Getz show why such an approach can make money in the short run yet ruin a company’s long-term prospects. Gore knew that leaders have a responsibility to create environments in which people can be more than automatons. To do so, executives need to spend time on the “soft” stuff — vision, mission, and values — and its impact on the day-to-day activities of employees. Employees who understand and accept an organization’s culture see their work differently and are less likely to make poor decisions. Organizations that spend the time, money, and effort needed to create this understanding at every level usually end up with truly empowered workforces.

— Rich Teerlink, former CEO and chairman of Harley-Davidson Motor Company and coauthor, with Lee Ozley, of More Than a Motorcycle: The Leadership Journey at Harley-Davidson (Harvard Business School Press, 2000)

Excerpt from Freedom, Inc.: Free Your Employees and Let Them Lead Your Business to Higher Productivity, Profits, and Growth,
by Brian M. Carney and Isaac Getz (Crown Business, 2009)

Back in the mid-1960s, when Les Lewis was a young supervisor, W.L. Gore & Associates was scraping by and still working out the kinks in its production of PTFE-coated cables — its only product at the time. When a batch went bad, Lewis came up with what he thought was an enterprising way to save money by stripping the bad cables so the materials could be reused. “So, I got these three women in the back of the plant and I gave them a wire spool each to sit down on,” Lewis explained. “And I put these spools of cable that had to be stripped there, and I gave them some kind of a knife or something to strip it, and they are sitting back there in the bowels of the Earth like a coffee klatch, stripping this wire off.” Needless to say, Lewis was pretty pleased with his economy and enterprise. Bill Gore, however, thought that Lewis needed some help.

“And I said, ‘Sure.’ So we turn around and walk out of the shop and into the only office in the plant, where the only blackboard was in the whole plant, and he shut the door and said, ‘Have a seat.’

“And I sat down, and he wrote up on the board, Formula for Failure, and underlined it.”

Underneath, Gore listed a series of bullet points:

“He listed about eight things. Honestly,” Lewis said. “And then he said, ‘Are you responsible for that wire stripping in the back?’

“He opened the door and walked out.”

Fairness means, above all, that human dignity is not subordinated to bottom-line considerations.

But there was an even deeper lesson for Lewis in Gore’s “Formula for Failure.” Lewis had a problem — how to save some money on the defective wire. And he imposed a solution on his employees. Lewis never asked whether they had any ideas for how to salvage the wire or what tools or conditions they’d need to get the job done. He never even asked himself whether the problem he was trying to solve was the right one. He never treated his fellow associates as intrinsically equal, as people who are paid to know how to do their jobs as well as he knows his.

Excerpt printed with permission by Crown Business, an imprint of the Crown Publishing Group.